Not many anglers get to fight a great white shark, especially fishing from a pier. But, earlier this week, a... 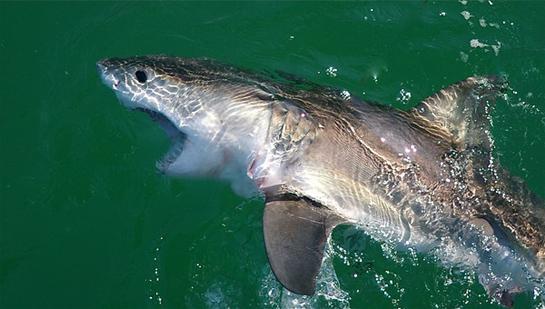 Not many anglers get to fight a great white shark, especially fishing from a pier. But, earlier this week, a fisherman on the Manhattan Beach Pier in Southern California, hooked, fought and released a 9-foot great white while swimmers unwittingly splotched around him.

This from Patch.com: “The shark was an estimated 8-9 feet, said Eric Martin, marine biologist and director of The Roundhouse Marine Studies Lab and Aquarium located at the end of the MB Pier … “
_
“Martin said he was pleased to be able to capture the quintessential shark shot: one in which its mouth is wide open. He was able to gauge the shark’s size when it passed under a swimmer, who was about 6 feet.

‘The shark went under the swimmer,’ said Martin, ‘and he had no idea the shark swam underneath him. He kept right on swimming.’ “_