Gabriella Esperson of Whitewater, Wisconsin let go what most anglers can only dream of: a potential new state record largemouth... 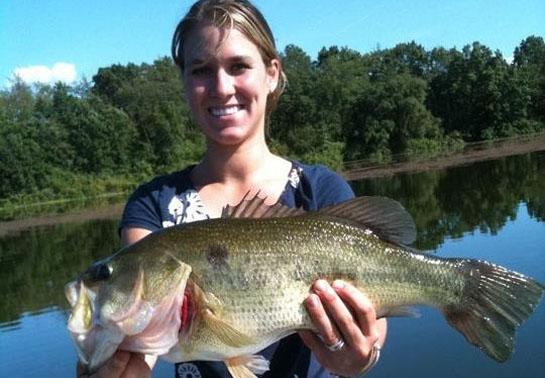 Gabriella Esperson of Whitewater, Wisconsin let go what most anglers can only dream of: a potential new state record largemouth bass.

The 21-year-old biology major and UW-Whitewater fishing team member was fishing on an undisclosed lake with her boyfriend Ryan Nelson near Edgerton last week Tuesday when a fish hit her wacky-rigged 6-inch soft plastic bait. Gabriella, who had caught and released a 13-inch largemouth bass only 45 minutes earlier, knew she had hooked something big.

She told the Milwaukee Journal Sentinel she felt like she was “dragging in a northern.” When the fish surfaced Gabriella could see exactly what she was dealing with. “My adrenaline kicked in,” Gabriella said. “There was no doubt in my mind I had the biggest bass I have ever encountered on my line.”

It took Gabriella another five minutes of hard fighting to bring the fish in. Once she did, she and Ryan put the tape measure and scale kept in Ryan’s boat to quick use. Gabriella’s fish measured 25.75 inches long, 20.06 inches in girth and weighed 11.05 pounds on an uncertified scale.

Despite knowing that the fish might be a new record (the current Wisconsin record for largemouth bass is just a little bigger at 11 pounds, 3 ounces) Gabriella promptly released it. “I knew this was an old fish and I had to let it go, whether it was a record or not,” Gabriella said. “By releasing the fish it allows it to reproduce and continually grow, and hopefully others will do the same down the road.”

Gabriella won’t name the lake where she caught and released her potential trophy fish fearing it might lead to too much fishing pressure. “I’m confident there are other lakes in Wisconsin like it, with bass just as big,” Gabriella said. “I think the next state record is out there growing right now.”