The Michigan Department of Natural Resources confirmed that the state’s muskie record was shattered by more than seven pounds last... 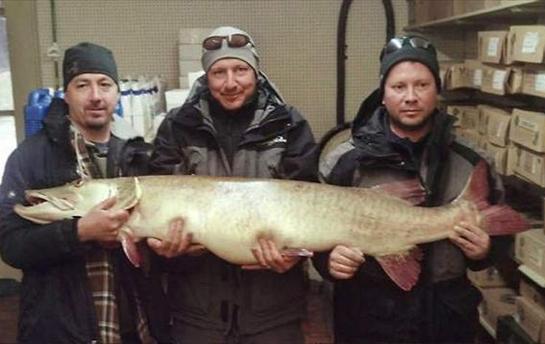 The Michigan Department of Natural Resources confirmed that the state’s muskie record was shattered by more than seven pounds last week.

Joseph Seeberger was bass fishing on Lake Bellaire on October 13 when the big fish struck his minnow. It took Joseph, his brother Chuck, and friends Jason Orbeck and Derek Barnes more than two hours to land 58-pound monster.

“It looked like a big log coming out of the water when I first saw the fish. I think we all were all just waiting for the line to break at any time,” Joseph told the Detroit Free Press. “Once the fish was in the boat, many high fives, some ‘holy cows,’ and I am sure a swear word or two.”

DNR fisheries biologist Patrick Hanchin and Conservation Officer Steve Speigl certified the record, officially declaring that it weighed 58 pounds, measured 59 inches in length (that’s eight inches longer than my second grade son is tall) and had a girth of 29 inches.

The previous state-record muskie weighed 50.5 pounds and measured 56.13 inches long. It was caught by Kyle Anderson on Torch Lake on Sept. 27, 2009.

With news of the 2009 record being broken, Fisheries Division Chief Jim Dexter wasted no time in promoting the state’s waters. “This fish shows that Michigan waters are capable of producing huge fish,” Dexter said. “Great waters coupled with appropriate management strategies can result in even more record fish.”