New Mexico isn’t exactly known for being home to world-class muskie fishing. But, if stories like this keep popping up... 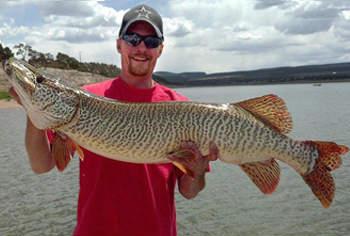 New Mexico isn’t exactly known for being home to world-class muskie fishing. But, if stories like this keep popping up on the wire, that could change.

Earlier this summer Justin Easley caught this 46-inch tiger muskie weighing 31 pounds and 14 ounces in Blue Water Lake. His fish broke the New Mexico state record, which has changed hands three times in just the last year and a half, according to the Associated Press.

This from the AP: _”The department [of Fish and Game] has stocked hundreds of thousands of tiger muskie fry and fingerlings in Bluewater and Quemado lakes since May 2003 to control goldfish and white suckers.

Anglers have been required to return all muskies to the water since April 2010, under a 40-inches-or-larger bag limit.”_

Tiger muskies are pike/muskellunge hybrids that typically grow faster and are more aggressive than normal muskies. For these reasons, they’re commonly stocked in lakes and large reservoirs around the country.