Bear Grylls, who starred in Discovery’s Man vs. Wild for seven seasons, premiered his new show on NBC last night.... 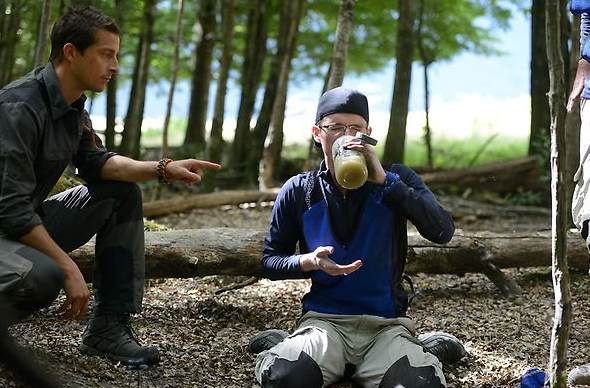 Bear Grylls, who starred in Discovery’s Man vs. Wild for seven seasons, premiered his new show on NBC last night. And, not surprisingly, it involved contestants drinking urine.

Get Out Alive sees Grylls assembling 10 teams of two to take on the challenges of living in a “Man vs. Wild” situation in New Zealand. For 30 days they will face challenges orchestrated by Grylls, and ultimately be judged by Grylls.

For each task, they are split into groups who are responsible for a certain aspect of survival — for this premiere it was food, fire, obstacles and shelter. After assessing them throughout their journey, Grylls eliminates one team each week that he doesn’t think would “get out alive.” In the end, one team will take home the $500,000 prize.

“Sometimes in the wild, purifying dirty water or drinking urine is the only thing that’s gonna keep you alive,” Grylls told the teams. Did anybody watch this last night? Give us your review in the comments section!

Of course, if you keep up with The Survivalist blog, you don’t need Grylls to inform you how to survive with a lack of fluids.You already know how to stay hydrated in any situation.