Behind the Scenes of New “Doomsday Castle” Show

No, you are not looking at the new “Game of Thrones” set under construction. Nor is this an annex for... 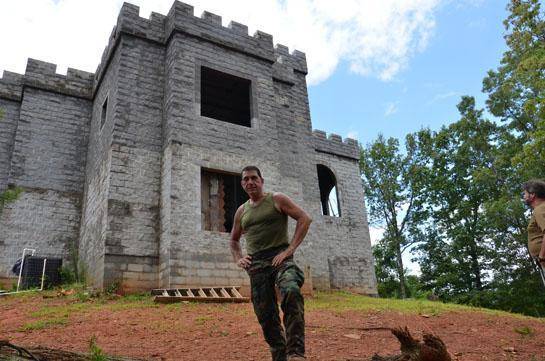 No, you are not looking at the new “Game of Thrones” set under construction. Nor is this an annex for a new land at Disney World. This is Doomsday Castle, which is the setting for National Geographic’s first spin-off series based on their hit show “Doomsday Preppers.” I was granted a royal pardon from my day-to-day existence as a commoner, and allowed a rare glimpse at this secluded prepper haven at an undisclosed site in the mountains of the Carolinas. Arm yourselves, both mentally and physically, for I shall take you through my “behind the scenes” look at Doomsday Castle, which premiers on National Geographic tonight, Aug. 13, at 10:00 p.m.

After a long and parching quest to “the Carolina mountains,” our unlikely band of media members, photographers, and writers finally arrived at Doomsday Mountain. The road signs and other landmarks had been covered with roughspun brown burlap, to preserve the secrecy of the site. This was to protect us from ourselves mainly, as we had all sworn solemn vows to conceal the location of the castle until our days had ended (also, we all signed no fewer than two non-disclosure agreements). At the mountain’s foot, we climbed into a ramshackle army truck and ascended to the castle site. The gravel road snaked through the forested mountainside before the trees seemed to peel back revealing the castle, its catapult standing at the ready.

We unloaded ourselves and our gear from the truck, and made our way over the drawbridge. As we passed under a formidable portcullis, a large metal gate with spikes at the bottom, I couldn’t help but wonder who built this gate. Were they qualified? Was this thing safe to walk under? My concerns were soon forgotten as I made my way into the castle’s great room. The ceiling is unbelievably high, probably 25 feet above us. But the hall was made warm and comfortable as we were welcomed into the castle by Brent Sr., the patriarch of this prepper family and the owner of this unique property. Brent Sr. (I can’t tell you his last name–non-disclosure agreement) was accompanied by five of his ten children: Brent II (or B2, as he was often called) is the oldest; daughters Ashley and Lindsey are next in age; followed by twins Dawn-Marie and Michael. All six of them are featured in the upcoming “Doomsday Castle” show, though it is Brent Sr.’s hope that the entire family will be involved in the castle on some level, as a way to bring far flung children and grandchildren together.

Brent Sr. outlined the busy day that was planned for us. We would visit the bunker under the castle and check out the grounds. The adventurous could ride a zip line off the castle or rappel down the walls. We would visit an outpost, observe the defensive traps in the forest, shoot bows and crossbows, fire the catapult, and have a feast in the castle.

The first down-and-dirty part of our tour was a trip down the hatch into the original bunker buried under the castle. The bunker installation was the first work done on this secret site, in 1999. It’s made from a 10,000-gallon steel tank buried on its side, and it holds a variety of shelf-stable foods, tools, books, and other survival supplies. The quarters were a very tight fit for a dozen folks and very humid–I can’t imagine having to live down there. But what a treasure trove! Hand-crank appliances, seeds, canned food, and a generous supply of books are stocked along the walls. There’s also a door at one end of the tank bunker that leads out into an upgraded bunker area, which is essentially the castle’s basement.

This area is drier, much more spacious, and showed signs of recent construction work. There’s a kitchen, a functional bathroom and two sleeping areas, along with other rooms for storage and living quarters. Since the castle is currently tied to the electrical grid during construction, standard kitchen appliances are included. I’m still kicking myself for not peeking inside the fridge. What’s in a doomsday castle fridge? Beer? Apocalypse-proof garden seeds? I’ll never know.

This humble set of cardboard commandments in the family’s kitchen will probably be featured in a later episode. The family indicated that they went through a particularly unruly stretch of time, which prompted the institution of some house rules and penalties for breaking those rules. Surprisingly, the cash reward system listed in the house rules was neither popular nor employed at any point.

Brent Sr., Brent II, and Michael showed us their strategy planning sand table. This technique has been used for military planning for centuries, and the family uses it to plan defensive strategies for the property. After the gentlemen explained a few tactics and plans, daughters Ashley and Lindsey walked us through their homemade solar food dryer and their recycled oven smoker unit. The smoker was my favorite item at this stop in the tour. The electric oven features a cutout in its floor to allow smoke from the drawer underneath to rise into the oven cavity. The girls said that they killed a chicken and smoked it in the smoker. Apparently, that scene is tentatively scheduled for the last installment of the eight-episode season.

Our next stop on the tour was the doomsday truck. This vehicle is being modified to run on gasoline or propane. It still needs some work, as a number of components were dangling uninstalled, but the non-electronic points and condenser ignition system for the engine of this ’74 Chevy Blazer is rumored to be EMP-resistant. Modifications abound on this truck, including an extra gas tank that holds 100 gallons. The parking pad is adjacent to a 1,000-gallon tank of propane and near a 500-gallon tank of gasoline for easy refueling.

This treehouse is also known as the LPOP (listening post, observation post). It is a few hundred yards down the mountain, away from the castle. This creative shanty has a water catchment system, a cooking hearth, and even a nearby outhouse. The younger family members insinuated to me that banishment to this site was more of a reward than a punishment.

After climbing back up the mountainside, most of the folks on our media tour rode a scissor lift to the roof of the castle to enjoy a rappelling lesson, ride the zip line, and take in the natural beauty of the castle site. Here’s one photographer taking in the latter, capturing some photos of eldest daughter Ashley. Lunch was next on the agenda. Though I was hoping for a boar with an apple in his mouth, I was very happy with the BBQ that was served.

Once everyone was down from the roof and lunch was wrapped up, we were taken on a tour of the property’s perimeter to see the traps and alarms that would discourage any rogues from sneaking up on the castle. A variety of fiendish and clever spiked log and pit traps were revealed to our group, along with a tripwire-triggered flare gun that was demonstrated by young Michael and his sisters.

My favorite part of the day was shooting with the family. They exhibited their prowess with bows and crossbows, dealing out medieval-style justice on some bleeding purple zombie targets. This was great fun, although a few ricochets off the castle wall sent people scurrying for cover. Those grape-colored zombies with blaze orange blood didn’t stand a chance.

The grand finale of this busy day was the firing of the catapult. I’m not sure how many laws–both federal and of physics–were defied in the production of the kingly weapon, but it worked flawlessly during out visit, hurling melons, bowling balls, and even a bag of flour, which exploded on a nearby tree. Kids at home: Please don’t try to make this. The catapult was, by far, the most dangerous thing that was shown to us on our tour.

Like all adventures, our exciting tour finally came to an end. While I cannot recommend that everyone go out and build a castle, bunker, or holdfast, I do recommend that everyone treat their guests as graciously and respectfully as I was treated by the folks at National Geographic and the family who owns this remarkable castle. To see more, you can check out the new show on Nat Geo, starting Tuesday, August 13th, immediately following the third season premier of “Doomsday Preppers.” Or check out the “Doomsday Castle” web site [www.natgeotv.com/doomsdaycastle], which includes videos, info on EMPs, comparisons of the Doomsday Castle to medieval castles and more.