Last week we blogged about a handful of huge alligators taken in Mississippi, but Magnolia State hunters aren’t the only... 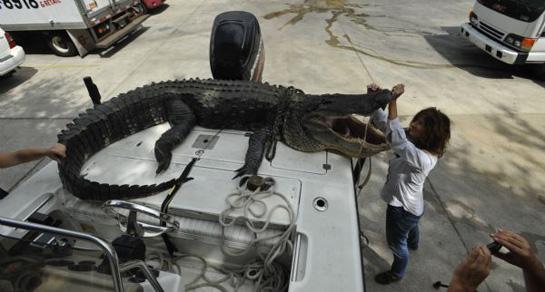 Last week we blogged about a handful of huge alligators taken in Mississippi, but Magnolia State hunters aren’t the only ones landing monster reptiles.

Ben Williams and his wife Louann killed this 13-foot, 7-inch gator while hunting on Florida’s Lake George last Wednesday. The Florida Fish and Wildlife Conservation Commission records show that the gator likely weighted somewhere between 700 and 870 pounds, according to Jacksonville.com.

Louann snagged the big gator with a fishing rod after they spotted it in about 9 feet of water.

“You couldn’t see him anymore but you could see the wake,” she told Jacksonville.com. “It looked like a monster in the water.”

They followed the reptile with their boat and were able to get another hook in it and finally haul it to the surface. Ben killed the gator with a bang stick loaded with a .357 round.