As I dig my gear out and begin prepping it for this year’s Dall sheep hunt, one cool addition I’m... 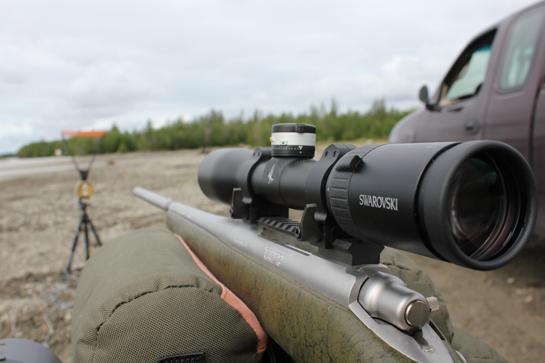 As I dig my gear out and begin prepping it for this year’s Dall sheep hunt, one cool addition I’m looking forward to using is the new ballistic turret from Swarovski.

The ballistic turret concept isn’t a new one, but in the last several years it has really gained a foothold in the hunting community. The concept goes back to target shooting, where instead of holding over, a shooter dials his sights to a known setting for a given elevation.

This has been adapted to modern long range and “sniper” scopes. The big change however, came when someone decided to use turrets specifically calibrated and marked for his rifle and load combination. This allows a shooter to very quickly make elevation adjustments without confusion or having to count clicks. These kinds of scopes have become popular and many scope manufacturers now make them.

Swarovski’s take on the ballistic turret is unique in that it is the only one I’ve seen where the shooter customizes it himself. It features three stacked rings, each with a color coded dot on it. After setting the bottom zero, you simply zero and adjust the configuration of each rings at your desired ranges. For example, my third ring is zeroed at 600 yards, so if I want to shoot a target at that distance, I just crank the elevation turret until the zero arrow lines up with the dot on that ring.

The self adjusting feature also allows the scope to be put on a different rifle and re-adjusted with minimal inconvenience.

This scope (I’ll be using the Z6 1.7-10 x 42 BT) is ideal for the type of terrain I hunt, where many times long shots are the only option. Two of the sheep I’ve killed have been at more than 300 yards, and being able to make a turret adjustment rather than “holding over,” is only going to improve my accuracy under field conditions.

The scope takes some effort to set up and like any piece of long-range shooting equipment you want to practice with it, but coupled with a good range finder, it’s a fast and deadly system.