Record Quest has taken me to the oak-and-hickory draws of northern Missouri, to the alfalfa fields of eastern Montana, even... 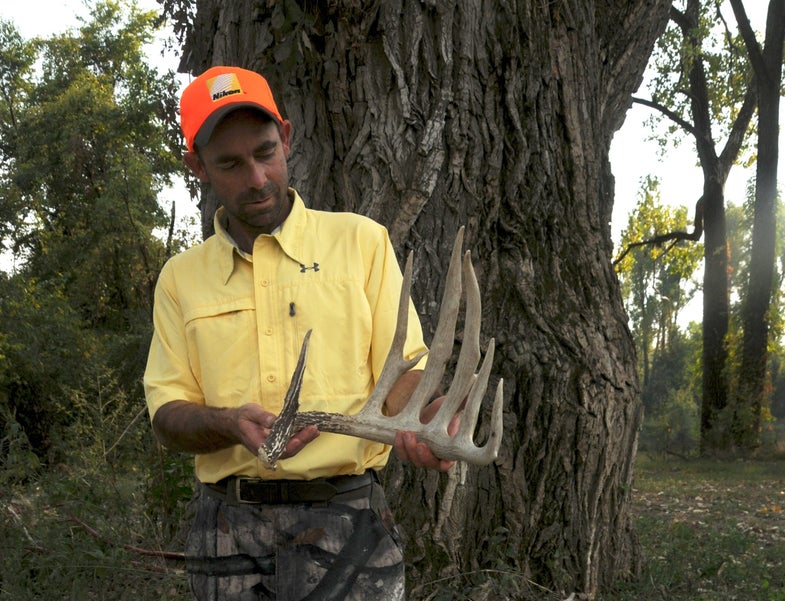 Record Quest has taken me to the oak-and-hickory draws of northern Missouri, to the alfalfa fields of eastern Montana, even to the Saskatchewan farmhouse of record-holder Milo Hanson.

This week it’s taking me to an unlikely place, extreme southeastern Missouri, near where the borders of Kentucky, Illinois, Tennessee and Arkansas all meet.

I’m here because of a remarkable piece of bone. It’s this tall and heavy 6-point whitetail shed, and I’m here in the Mississippi River bottom to hunt the soybean field where it was found in June.

The landowner who found it knows something about big deer. For the past few years he’s enlisted the help of renowned wildlife biologist, Dr. Grant Woods, to turn his property into a trophy-buck paradise.

I’m here because a mutual friend of both mine and Dr. Woods said I needed to hunt this place, to see the land that is capable of producing such a buck. I flew into Memphis earlier today, rented a car and finally got a chance to see the shed.

THE THREE IFS
It’s big. Its main beam is heavy and long and smooth as an elm branch. Its tines are tall. Tonight I asked Dr. Woods, who is also hunting here, to put the buck that dropped it in perspective.

Grant held the shed, turning it over in his hands. Then he delivered this pronouncement.

“Any time you see a remarkable shed, you need to be careful about making assumptions about its former owner, especially if you’re extrapolating about what that buck might look like a year later,” said Dr. Woods. “You need to ask a number of questions. I look at this shed, and I wonder about three ‘ifs.'”

Here they are:
IF the buck lived… “I ask that question because you can tell a lot about the health of a buck just by looking at a shed. Look at the base. Did it part cleanly from the skull? If there are pieces of skull cap still on the shed, it’s probably a sign of a brain abscess or other illness that might indicate an unhealthy deer. But this deer shed cleanly, and I think we can answer this if in the affirmative.”

IF the rack is typical… “We don’t have the other side, so we can’t know if it matches this. But based on the shed we have, which is very typical with only two or three inches of deductions, I’m going to assume the other side is a pretty close match.”

IF the buck grew at least 10 percent… “On average, antlers will put on about 10 percent greater mass from one year to the next. But they grow faster in the prime of their lives. Based on basal circumference, I put this buck at 3-1/2 years old last year, and given that age and the quality forage on this property, it’s more likely that he grew closer to 25 percent this year.”

So, considering those three ifs, how large is the buck this year? Dr. Woods smiled.

“If those three ifs are true, then you are looking at the walking world-record whitetail.”

I just about sprained my ankle getting my hunting gear together. I’ll be in the field well before sunrise and will report on the day’s findings tomorrow. I can get pretty excited with a collection of “ifs” like those.