How to Prevent a Gunshy Dog

I cringe when I hear people talk about how to introduce a puppy to gunshots. Advice like “fire a shot... 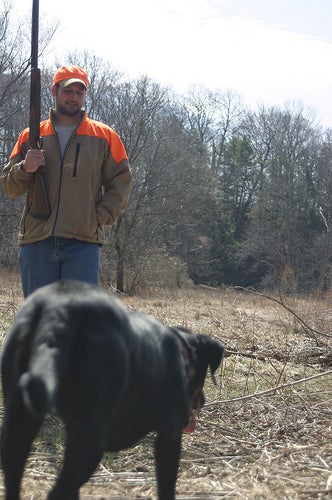 I cringe when I hear people talk about how to introduce a puppy to gunshots. Advice like “fire a shot over them while they’re eating” usually comes out somewhere in the conversation. I don’t know about you, but firing a 12 gauge next to me while I’m eating Fruit Loops would definitely get my attention but it would also make me apprehensive every time a gun came out.

Here is a logical progression of introduction that virtually assures your dog won’t be gunshy.

I tend to fall into the camp that believes there are no dogs genetically fearful of the gun. After all, the dog doesn’t know a gun from a rocking chair. It’s the association we build between the dog and the gun (and loud noises in general) that matters. In that respect, gunshyness is a man-made problem, and one that’s easily avoided.

First of all, your dog has to be mentally ready to be introduced. I’d refer you to the video Q&A we did with George Hickox on using benchmarks to gauge your dog’s boldness and readiness to be shot over.

Secondly, you can’t start too small or too far away. Using small guns from a distance and associating them with birds or retrieving will help your pooch connect the gun and its bang with something positive.

Again, you can’t get too small or too far away. Cap guns, .22 blanks, 12-gauge primers and the like from 50, 75, 100 or more yards away is what’s called for. You can always move in, but once that shot is fired too close and your pup becomes fearful, you can’t take it back and you’ll have to work harder (and from farther away) to overcome the damage you’ve done.

You’ll need a helper to assist in this exercise. Have them shoot the gun from distance while you simultaneously throw a bird. If you’re starting with a small enough bang from a long enough distance, the dog probably won’t even react. That’s good.

Slowly move in and repeat the exercise. If at any point the dog shows interest or apprehension at the sound, stop and back the gunner up to the point that the dog didn’t mind.

After a bit you should be able to move in close to the dog. When you can shoot that cap gun, .22 blank or 12-gauge primer over the pup without him paying a bit of attention to the gunner, then you’ve achieved one measure of success.

This isn’t a day-long process, especially if you have a timid dog or one that’s not completely crazy about birds or retrieving. Instead, take it easy and let the dog’s body language dictate the progression of firearm, distance and time (from days to weeks) during this crucial step in its education.

For some more excellent reading, I’d suggest this Team Huntsmith article on the subject. It also goes into the use of the stakeout chain and pack mentality to help embolden the dog.

Another great article comes from Mike Stewart at Wildrose Kennels. He wrote this excellent piecefor me when I was the sporting dogs editor at ESPNOutdoors. This is a valuable article that discusses the very concept of gun introduction, but also includes a long list of stupid things YOU can do to create a gunshy dog.

Have any of you Gun Doggers had any problems with gunshyness? Do you believe the dog would have been that way no matter what or did you (or someone else) do something to create that fear?

Enjoy the reading and I’m looking forward to your responses!