It’s a common theme in these days of wild turkey management: birds appear of their own biological accord where there... 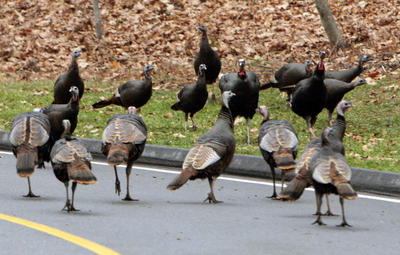 It’s a common theme in these days of wild turkey management: birds appear of their own biological accord where there were none before, and residents, often non-hunters, react. In this case, we’re told, the turkeys are blocking traffic, and in one situation, a turkey pecked at a resident’s glass door (no doubt at the image reflected there), prompting a call to the local animal control officer.

That animal control officer had no leverage to solve the challenge since wild turkeys fall under the charge of the Colorado Division of Wildlife.

The whole issue seems analogous to the resident goose challenges we experience around the country, and especially here in the Northeast, where you’ll find honkers loafing in city parks, golf courses, school grounds and even traffic circles, where they feed on green grass (and spoil the area under their feet with goose poop) before agricultural harvesting disperses at least some of the birds to where we might hunt them. Or not.

In the case of these (ahem) invasive suburban turkeys (and others around the country), they live where they can’t be hunted (inside city limits), though the Colorado fall turkey season begins Sept. 1.

What do you guys think should be done about this “problem”? Should a special bow season be created inside Colorado city limits (much like expanded archery deer seasons in some areas)? Should the turkeys be live trapped and transferred to where they might be hunted?

For more on this story, check out:

For more on the Colorado fall turkey season: