How To Survive A Gunshot Wound

In 2010, British Army Lance Corporal Luke Reeson was shot in the face by the Taliban in the Helmand Province... 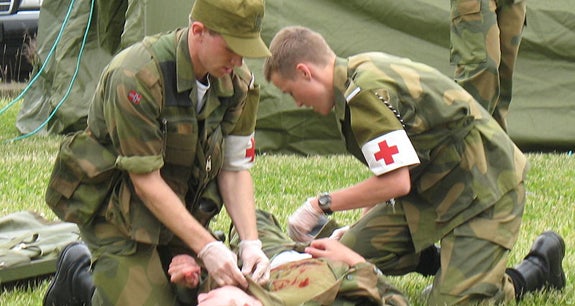 In 2010, British Army Lance Corporal Luke Reeson was shot in the face by the Taliban in the Helmand Province of Afghanistan. The bullet ricocheted off his body armor, smashing into his lower cheek and back out through his mouth. Instead of going into shock, or giving in to panic, Corporal Reeson spat out the bullet and walked two miles to get help.

While most of you will likely never be in the position that Reeson found himself, the question is worth asking: If, god forbid, you are ever shot, what should you do to survive?

The short answer is that you survive getting shot with a little bit of luck, some skill, ample trauma first aid supplies, a degree of stubbornness and maybe a little divine providence.

But there are a lot of variables stacked against you when dealing with a gunshot wound. Among them:
• The events surrounding the shooting
• The type of round that hit you and whether it is still in you
• Where you were hit
• Whether any organs, veins or arteries were damaged
• Your physical reaction to the wound

When Help Is 10 Minutes Away:
If you are in a setting where rescue is an option, the first thing to do is call 911. Tell them “Gun Shot Wound” and exactly where the injured person is located. If you’ve been shot, do your best to give the 911 operator all the details you can. If the wound is bleeding, cover it with a trauma dressing and apply pressure to help control bleeding. You can also use Quikclot under a dressing, if the bleeding is bad. How do you qualify “bad”? Let’s just say that gushing or spurting is bad. If the victim is a companion, make sure he lies down and monitor him for shock, which is a dangerous drop in blood pressure. If a limb was shot, elevate it above the heart, as this will reduce bleeding.

If the wound is not bleeding externally, the victim may still be bleeding internally, which in many cases can be worse than external blood loss. Apply a dressing to the wound, have the victim lie down and keep them calm until help arrives.
**
When Help Is Not Coming:**
If help is not in the immediate future, we have a whole different world of survival to walk through. Perhaps you are in a remote area and the victim of an accidental shooting. Perhaps you are in a disaster situation in which all communications are out and you were just shot by looters. Whatever the scenario, you are the only help that you are going to receive.

Short-term survival means stopping bleeding and praying that nothing too important, like an organ or an artery, got hit. Put pressure on bleeders, elevate wounded limbs, stay calm and watch the blood pressure and pulse for symptoms of shock.

Your long-term survival of a noncritical gunshot wound, with no cavalry coming to save you, boils down to one thing: preventing infection. Those dirty bits of clothing fiber, skin and hair that the bullet dragged into the wound are certainly going to cause trouble, so keep the wound as clean as possible. Long-term survival of bad wounds is all about dealing with the pain, letting your body be the surgeon and mend itself, and preventing infection. This type of scenario is why you should keep potent antibiotics in your Bug-Out Bag.

As I said, there are a lot of variables to consider. But you can prevent being unprepared by keeping a decent stock of first aid supplies at home, at work, in your vehicle and in your outdoors equipment. This should include trauma gear to handle gunshot wounds, stabbings, deep cuts and puncture wounds.

Or just purchse the Adventure Medical Kits Trauma Pak. It contains all the gear listed above, plus gloves, bandages, antiseptics and detailed trauma wound care instructions.

THE ULTIMATE SURVIVAL MANUAL
Check it out for more great survival skills.