Which Wild Animals Are Safe to Eat in a Survival Situation?

While securing shelter, administering first aid, signaling for help and performing a host of other chores rank as top priorities... 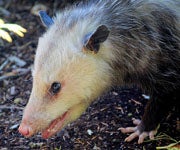 While securing shelter, administering first aid, signaling for help and performing a host of other chores rank as top priorities during an emergency, the first question that tends to pop out of most people’s mouths is, “So what are we going to eat out here in the woods?”

A quick rule of thumb is that you can eat anything on land with fur or feathers, as long as it is properly prepared and cooked thoroughly to kill bacteria and other pathogens that would make us sick. That means mammals and birds are good to go, although palatability is never guaranteed.
Earlier this year, while teaching survival school, my classes and I ate two possums from my property. Both were fresh and slow-roasted over the open fire. The first possum tasted delicious. Had I been blindfolded, I would have sworn that it was pulled pork barbeque. The second possum, however, sucker-punched me in the mouth. I was all ready for more possum barbeque, but this one tasted like he had been cooked in a burning plastic garbage can. Not nice.

Bugs and reptiles don’t offer as much of an open menu. Numerous insects and their larvae are toxic to humans. Some reptiles and amphibians can be toxic as well. If we stick to fur and feathers, we are taking the guesswork out of the equation. The only feathered beast I would recommend that you avoid is the vulture. Its diet (rotten meat) leaves it tasting like its meals and keeps it pumped full of the worst bacteria. It’s a bad sign that nothing eats a dead buzzard–not even other buzzards.

You can eat other scavengers, like crow and skunk, as long as the animal was healthy when it was killed, quickly field dressed and cooked well done.  The next time you are in a survival emergency with a few rounds of ammo to spare or some snare wire, think about scoring some furred or feathered food. And good luck catching a barbeque-flavored opossum. I promise, they are out there!

Calorie content (per 3.5 ounces) of some tasty wild game meats: