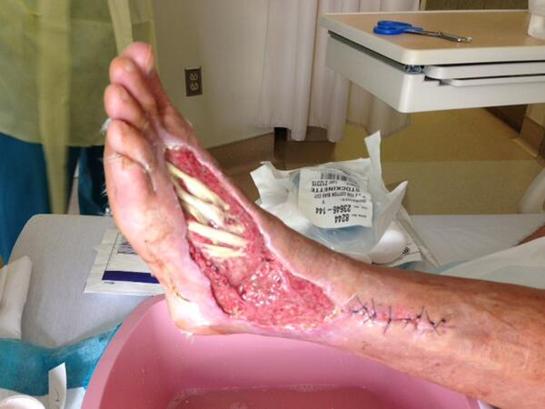 Celebrity survivalist Bear Grylls tweeted yesterday: “Our man vs wild producer suffering from a brutal snake bite — fighting the injury with courage,” with the gut-wrenching photo shown below.

Since then, the photo (which shows the skin rotting away from producer Steve Rankin’s foot) has gone viral and is creating quite a stir in the social media world.

A Discovery Channel source told the Huffington Post that: “The photo was taken three weeks ago, when Grylls and Rankin were shooting a new series for the network called ‘Naked & Afraid’ Since then, Rankin has undergone surgery for the wound, and his prognosis is very good.”

It’s unclear where the team was filming and what species of venomous snake bit Rankin (see our list of the world’s deadliest snakes).