Wildlife Photos: Charged By a Bull Elephant in Botswana

This year Botswana officials announced that sport hunting would end in the country after the 2013 season. The decision was... 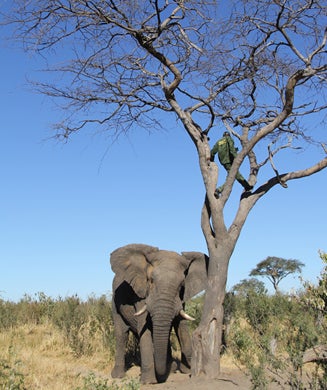 This year Botswana officials announced that sport hunting would end in the country after the 2013 season. The decision was an emotional (not scientifically-based) one made by President Ian Khama, who stated: “The shooting of wild game purely for sport and trophies is no longer compatible with our commitment to preserve local fauna as a national treasure, which should be treated as such.”

This decision was met with much criticism as the country has no formal wildlife protection plan. Some experts say the move will hurt wildlife (with some estimating that certain species will decline by 75%) thanks to the ever growing threat of ivory poaching and poaching for meat. Both types of poaching are currently being curtailed by hunter dollars. Wanting to see what the closure of sport hunting would mean first-hand, I stayed in Botswana for three weeks last month and was fortunate enough to tag along on elephant hunts for two of those weeks with Ivan Carter of Johan Calitz Safaris.

Elephant hunting actually isn’t much different than hunting whitetails in North America. Botswana’s 205,000 elephants are free-ranging. Just like deer, elephants cause damage to crops and farmland, destroy their habitat if overpopulated, and are constantly coming in contact with humans due to habitat loss. The highways are spotted with elephant warning signs just like there are deer crossing signs on rural roads in the U.S.

Hunting for elephant is conducted through tracking and spotting and stalking. Hunting is done on both public and private land (again, all elephants are free-ranging here … really. Just try to stop one from crashing through a barbwire fence). Only 500 elephant tags are issued each year at a cost of $60,000 to $100,000. Hunts generally last at least 14 days and most elephants are shot at under 40 yards.

Early in the hunt we came across a lone bull that appeared to have pretty decent ivory. We decided to check him out despite the fact that he was obviously in musth. Musth or must is the period when reproductive hormones in bull elephants escalate exponentially. Testosterone levels will spike 60 times greater than normal. During this time, fluid surges from the bull’s temporal glands and seminal fluid drips from its penis. Tracking this elephant meant simply watching for wet sand. The smell was unbelievably rank.

Ivan led clients Brian and Denise Welker and me to within about 15 yards of the elephant and then judged his ivory too small. Ivan estimated the bull’s tusks to weigh about 40 pounds each. A good Botswana tusker will carry at least 60 pounds per tusk. At 15 yards you can hear an elephant breathing, listen to its stomach rumbling, and you’ll choke on its musth stench.

Despite the fact that we were only 45 feet from the bull, he never knew we were there. An elephant’s eyesight is terrible, but his hearing and sense of smell is incredible. Playing the wind and keeping quiet are key. We watched the bull for a few minutes before he ambled off to continue feeding. We were still searching for a trophy bull, so Ivan sent our tracker Roy up a tree to scout for more “eleies.” Despite the fact that these animals weigh a couple tons and stand about 13 feet at the shoulder, spotting them in brush is unbelievably difficult.

No sooner had Roy climbed the tree than the wind swirled to give away our location. But rather than flee, the enraged bull turned toward us and charged forward.

Ivan had Brian, Denise, and I slowly back away as the bull thundered forward. Roy wisely stayed in the tree.

When the bull made it to the tree (about 9 yards from us on the ground), Ivan yelled, “Hey ‘ey ‘ey!” and waved his Heym .600 Nitro Express Double Rifle over his head to appear larger. The bull took notice and left in a cloud of dust and ammonia-scented musth.

Could the bull have killed us or pulled Roy from the tree? Absolutely. Under certain conditions, elephants can be the most dangerous big-game animals on the planet. This truth came to light when I heard news that just two days earlier Professional Hunter Erwin Kotze was killed by an elephant in another part of Botswana. Kotze was killed when an elephant charged and crushed him with its head and feet. Although killings such as these are rare, they do happen. According to the World Wildlife Fund, more than 200 people have been killed by elephants over the last 7 years in Kenya, which banned hunting in 1977.

When I asked Roy if he was scared, he shrugged it off as if the event was no big thing. “My God Roy, weren’t you scared?”

I guess that Roy’s 30-plus years as a tracker have taught him to read an elephant’s intentions.