Despite being a mostly nocturnal creature, a rogue badger wandered into a convenience store in broad daylight this week in... 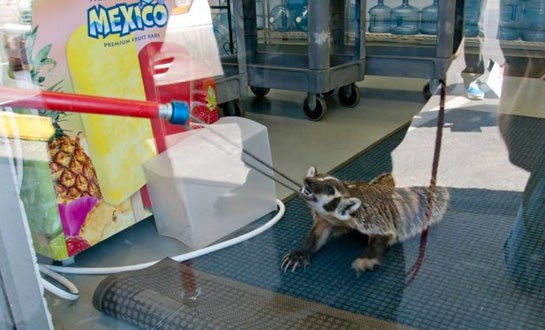 Despite being a mostly nocturnal creature, a rogue badger wandered into a convenience store in broad daylight this week in Sparks, Nevada. At 3:00 in the afternoon on Tuesday a state game warden was called to Fresca Waterstore with two officers from Washoe County Animal Services. They engaged in what the media has described as a “1-hour standoff” with the badger.

The furry fiend was able to evade both a tranquilizer dart and catch pole, keeping officials at bay for almost an hour before they finally lured him into a cage with cat food.

But what drove the badger to take an afternoon stroll in suburbia?

Chris Healy, the Nevada Department of Wildlife spokesman, told the Associated press that the persisting drought might account for the badger’s strange behavior, as the dry weather has been known to push bears and coyotes into suburban areas.

Healy went on to explain, “Some species we can’t relocate, we have to euthanize them. But this one was determined to be OK.”

No one was injured and the Department of Wildlife was able to relocate the perp to the wilds north of Reno.

Have you seen any feisty animals in strange places? Let us know in the comments section!

Photo courtesy of The Nevada Department of Wildlife.