Survival Skills: How to Identify and Utilize Evergreen Trees

Winter tree identification can seem like a very daunting task in most areas. With the broad leaves having fallen in... 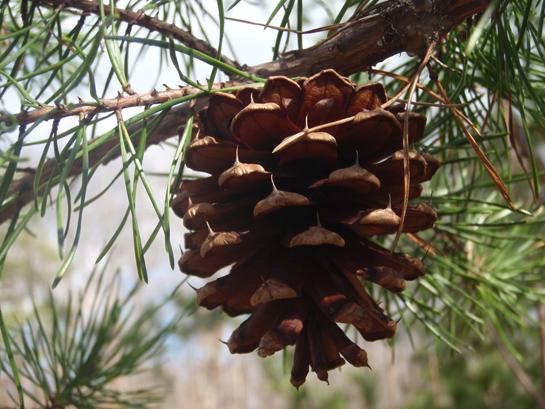 Winter tree identification can seem like a very daunting task in most areas. With the broad leaves having fallen in autumn, many trees require a very close inspection to determine their genus and species. Even then, you could still be completely stumped (pun intended). Lucky for us, though, the evergreens don’t change much over the colder months, and they offer many handy parts and materials. Here are three of the most useful needle-bearing trees that are common through much of America.

Spruce
“Sharp square spruce.” Remember that and you’ll have an easy time identifying this tree. The individual needles are each tipped with a sharp point, and they each have a square cross section. These needles are less than an inch long and grow all the way around the twigs. Spruce can be a source of useful sap (resin) and very flammable kindling. It also provides food in the form of the young spring twig tips and the inner bark, which can be dried and ground into spruce bark flour.

Fir
“Flat friendly fir.” This mnemonic device reminds us that fir needles are, in some ways, the counterpoint to spruce needles. The needles of fir trees are not pointed, and are therefore soft to the touch. They also tend to grow on either side of the twigs, giving the green growth a flat appearance. These needles tend to be longer than those of spruce trees, and over an inch in the case of the balsam fir. But despite the needle differences, the two trees have many similar uses. The pitch in fir wood makes it for great kindling, and this sappy material by itself can be used as glue. The inner bark can also be used to make flour.

Pine
Having longer needles than spruce or fir trees, pines have another trait that is easy to identify–multiple needles. Pine tree needles grow in bunches of 2, 3, or 5. As with spruces and firs, the inner bark can be eaten. A tablespoon of pine needles can be chopped and soaked in scalding hot water for ten minutes to make a tea that contains four to five times your daily requirement of Vitamin C. Just skip the loblolly pine and ponderosa pine species, as these may be toxic. Also, pine needle tea altogether if you are pregnant.

Tell us about your local useful trees, and how you spot them in the winter by leaving a comment. Good luck and safe foraging.