The allure and beauty of a bug-out-bag is easy to see. It is a bag, suitcase or backpack full of... 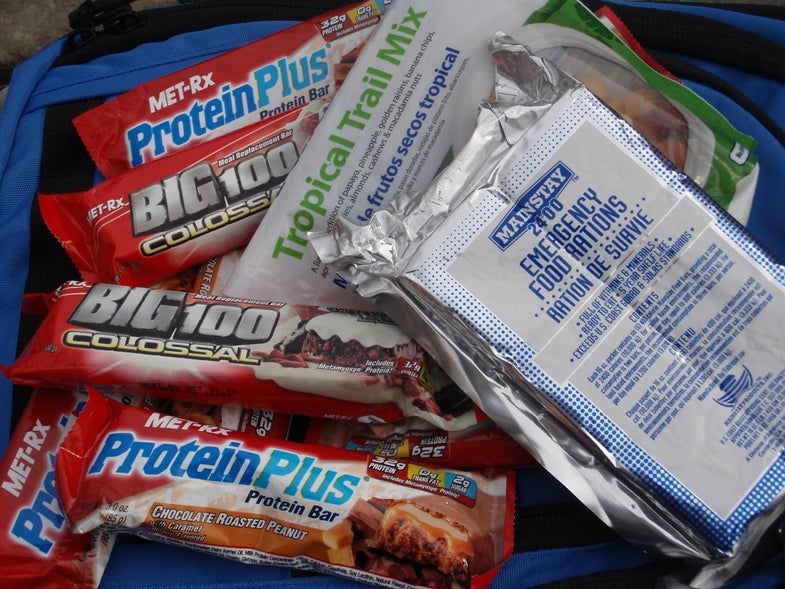 5. Food
You'll need ready-to-eat foods, ideally things you could eat while walking. During the initial trek to no man's land, survival rations, meal bars, and other high-calorie, no-cook foods would be your best bet. MREs are great, but they take up too much room in your pack. A few of the vacuum-sealed, freeze-dried "pro-pack" meals would be nice for a morale boosting hot meal, but they do require you to stop and boil water to prepare it. Since you can't carry a month's worth of food, plus all the other gear we are listing here, the best course of action would be to cache food at your destination, and maybe even at points along the way, ahead of time. A few pounds of rice might make sense in your INCH kit, but buckets of food buried at your bug-out location makes more sense. Tim MacWelch
SHARE

The allure and beauty of a bug-out-bag is easy to see. It is a bag, suitcase or backpack full of well-chosen gear and supplies, collectively able to sustain you in the event you must flee your home or possibly even evacuate from your area. But this lifeline isn’t without its flaws. Chief among them: the fact that these supplies are limited. In other words, you can only carry so much with you. With that in mind, let’s look at three different ways to stretch your bug out food (or any other supplies, for that matter), and survive when your resources run thin.

1. Savor It
Food is one of the first things that typically runs out in a bug-out-worthy emergency. So how could you make it last? You may be familiar with the concept I’m about about to suggest, either as a survival technique or perhaps even as an exercise in healthy eating. Some contemporary health-nut proponents call it “super chewing.” A hundred years ago it was called Fletcherizing (following the beliefs of health food faddist Horace Fletcher).Other diverse folks, from POWs to Buddhist monks, have practiced this technique out of need or dogma.

What on earth is it, you ask? It’s the process of chewing your food 32 times, 45 times, or even a hundred times before swallowing. This breaks it down more thoroughly and introduces more enzyme rich saliva to allow you to pull more nutrition from each bite you take. Ration your food and chew it many times before swallowing, and it just might give you the same nourishment as if you had wolfed down a bigger amount of food.

2. Cut It
Another option which works with some foods and other supplies is to cut them with something else. Nutrient dense food could be cut with a filler. For example, you could cut flour with the powdered inner bark of pine (a legitimate wild edible food) to extend the sack of flour. This was a common winter trick on the early American frontier and the Great North. But food isn’t the only thing you can “extend” either. Add water to liquid soap to stretch your supply. Combine a stack of dead, dry leaves with a few precious squares of toilet paper, to extend your roll of TP… You get the idea.

3. Live Without It
The harshest of these three techniques is doing without. Try your best to find a substitute for the thing you need, but if none is available—do without. This is easier said than done, and at times, simply impossible. This technique doesn’t work with critical things like food, water, or first aid supplies. But you may be able to wean yourself off other items, and in some cases, you’ll have to. The absence of vices like tobacco, caffeinated beverages,illegal drugs, and many other things can put a person through serous withdrawal. But at the end of it, you might find that you don’t need those things anymore.

Ever had to do “without” on a hunting trip? Ever chewed your mouthful of food 100 times? How would you make your supplies last? Please tell us your thoughts by leaving a comment.