Survival Skills: How to Survive a Wildfire

A fire offers friendly warmth to campers alone in the bush, but when the conditions are right, the wind, weather... 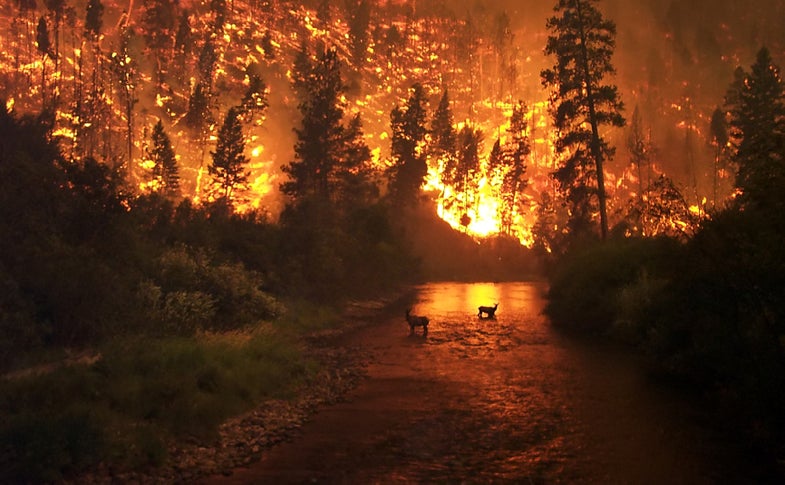 A fire offers friendly warmth to campers alone in the bush, but when the conditions are right, the wind, weather and dry vegetation conspire to turn that campfire into a hellish blaze. For many families and businesses, this season’s western wildfires have been just that. A number of fires are currently burning in Washington state, Idaho, Oregon, and California. With dry conditions throughout these states, local fire fighters have enlisted the help of active-duty U.S. soldiers—an allocation of manpower hasn’t happened in more than nine years. Two hundred soldiers from the 17th Field Artillery Brigade of the 7th Infantry Division have been called in for training to fight wildfires, and are likely to be deployed soon. But what if it’s too little too late for your situation? Here’s how you can make your property safer and potentially survive a blazing wildfire inferno.

“Firescaping” is a great strategy around your home’s exterior, if you live in fire prone areas. This is a form of landscaping designed to keep your house from going up in smoke. Here are a few ways to do it.

1. Plant wisely
Start by choosing the right kind of trees to plant. Conifers contain flammable, sometimes explosive, oils and resins. Trees with broad leaves are usually a safer bet. Protect structures with fire-resistant, high-moisture vegetation like ice plant. Use a drip-irrigation system to water trees and shrubs year-round, or use non-flammable ground cover such as gravel.

2. Trim your trees
Make sure to maintain the trees within 30 feet (9 m) of your home by trimming dead or low-hanging branches, which will be the first to light up. While you’re keeping dry wood away from the house, make sure your woodpile is off at a distance, too.

So what do you do when the neighborhood starts burning? There is a controversial idea in which homeowners act like firefighters, ignoring evacuation orders in the face of a wildfire. Instead, they are choosing to stay and defend their home. While many experts advocate leaving an area before evacuation orders are given, others cite studies in which vacated homes burned down from just a few embers landing in dangerous spots like woodpiles, debris laden gutters, or on foliage covered rooftops. If indeed someone had been there, some of those fires could be put out with a single bucket of water. But is a house and its belongings worth your life? I say no. Hit the road early, before people start driving crazy because they see flames in the rear view mirror. Homes and possessions can be replaced, lives cannot.

UNDER THE FLAMES
If told to evacuate, do so. But if you do get trapped at home, stay inside where the structure will protect you. Move to a central room, away from exterior walls. Close the doors to cut down on air circulation, which can feed flames. And if you’re caught outside near a wildfire, remember that the most dangerous places to be are uphill from the fire and downwind from the flames. Let the wind point you in the safest direction of travel to get away. If it’s blowing toward the fire from your position, then run into the wind. But if the wind is behind the fire, blowing toward you —run on a course that puts you perpendicular to the wind, and move fast! That fire will be coming at you quickly.

Finally, if you’re caught out in the open, move to an area that has already burned over. This may seem counterintuitive, but that area has already had most of its “easy” fuel consumed. It’s not likely to burn again.

Have you been affected by western wildfires this year? Let us know by leaving a comment.