To get started on your culinary adventure of “rock frying,” you’ll need a flat or concave stone that is about... 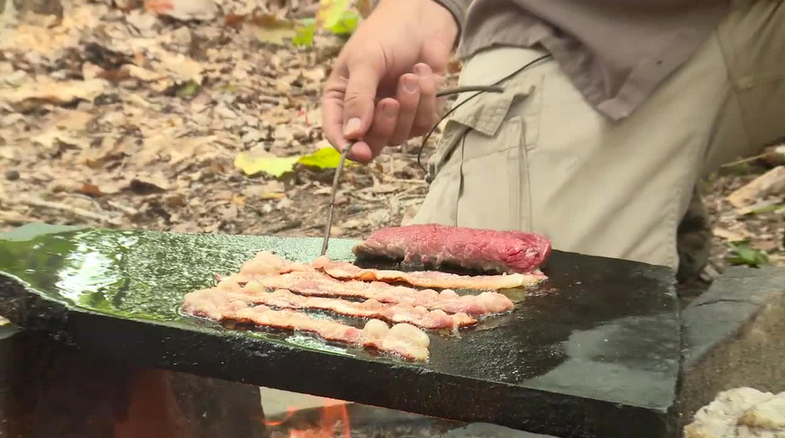 To get started on your culinary adventure of “rock frying,” you’ll need a flat or concave stone that is about an inch thick, and is not too gritty or rough. Gritty sandstone and other rough surfaced stones will cause the food to stick, making frying difficult. For your safety, it’s also critical to collect the right rocks from the right location. When placed in or over a fire, a rock full of moisture can explode like a grenade. Make sure you follow these guidelines:

—Never pick up your rocks near or out of water. Even if it’s a rock shaped perfectly for a frying pan, it will probably blow up when the water trapped inside is heated.
—Quartz, obsidian and other “glassy” looking stones are prone to exploding.
—Slate and shale will have the right thickness, but they also trap water inside and are very likely to pop or explode.
—Limestone, some greenstones, granite, soapstone, and other meta-sedimentary rocks will make the best frying rocks throughout most of the US.

If you’re not sure about the rock, it’s always smart to test it. Check for potentially dangerous rocks by placing the stone in question into a good-sized campfire. Walk 100 feet away, and observe it for 20 minutes as the fire heats the rock, and then dies down. If the rock is unsuitable, these extremes should either cause it to blow up within 20 minutes, or crumble into sand and grit as it cools down. If neither of these happen, you’re good to go.

Once you’ve picked a winner, your next step is to position the rock securely about a foot off the ground. If the rock is too low to the ground, you cannot maintain a decent fire underneath. The rock can be propped up on a stand of other rocks, or placed over a dirt trench with the fire underneath. Just make sure that the rock can’t fall over, and ensure there’s ample airflow for the fire.

If you really want to set up your primitive kitchen correctly, you can level the rock by pouring a little water in the center of it. The water will run off the low side of the pan, so you can slip small stone chips under the low side of the rock frying pan to even the plane.

Now, you’ll need to build up a fire so the flames are touching the underside of the rock, or even curling around the edges. Build a bed of coals, and continuously feed small twigs and sticks to keep the flames rolling. You will need to maintain flames for frying, and believe me – you can fry all kinds of food. Fish, red meat, vegetables, and fry bread are just some of the foods this method can fry to delicious perfection. As a testament to the quality of this ancient cooking method, it is still being used in modern times in certain spots across the world.

Tips for rock frying:
—A slight depression in the stones surface will hold oil for better frying. A flat, thin, smooth rock with a shallow depression in the “frying area” is the ideal frying rock.
—Don’t get too attached to your rock frying pan. The heat will probably break the rock eventually, and all you can do is hope it doesn’t drop your eggs in the dirt when it does.
—When you’re finished cooking, let the rock cool slowly on its own. Don’t try to wash it until it is cold since the thermal shock can break it.
—And again: DO NOT USE quartz, glassy looking rocks, slate, shale, and wet river rocks.

Have you “rock fried” before? Tell us how it worked, and what you cooked.