After Spending Two Hours in the Back of a Toyota, an Endangered Green Sturgeon Was Returned to a California Waterway

Game wardens released a federally-protected green sturgeon, after it was found in the back of an SUV 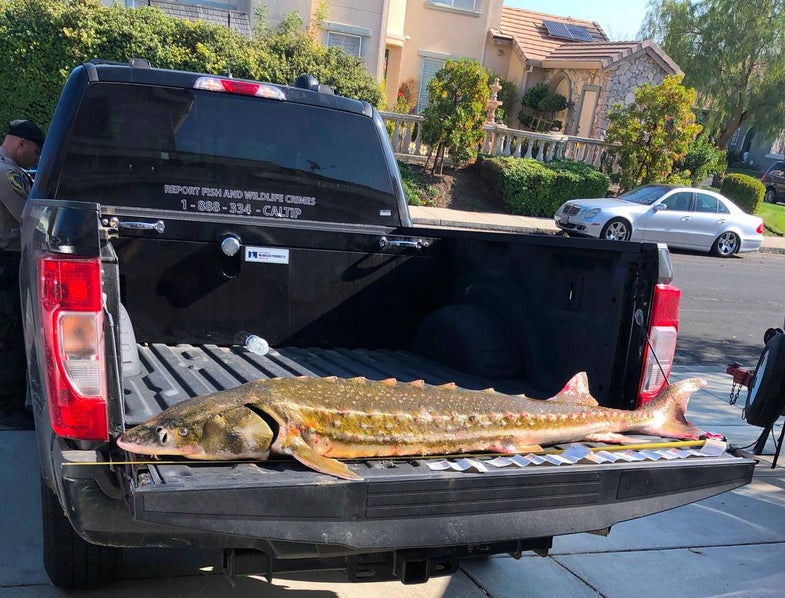 California game wardens returned this green sturgeon to the water after it was poached by an angler in November. California Dept. of Fish and Wildlife
SHARE

In November, California game wardens were notified that a man had caught and kept a protected green sturgeon, tossing the fish into the back of his SUV, according to a report Monday from The Sacramento Bee. The fish had been taken from the Clifton Court Forebay, a 2,500-acre public reservoir that connects to the San Joaquin River near San Francisco. The tip came from another angler and included photos of the accused license plate (a Toyota RAV4). Wardens ran the license plate number and learned the vehicle belonged to Kevin Ty Tran, 67, who lived in the nearby town of Tracy. Wardens arrived at Tran’s California residence just before Tran pulled up in his SUV with the fish.

Warden Matt Henderson told the Sacremento Bee that the 64.5-inch sturgeon was “sort of folded in the back of this SUV.”

Henderson said that while the sturgeon had been out of the water for at least a couple hours, its body and gills were still moving. Tran was quickly issued citations from the wardens for the illegally-caught green sturgeon. Then they put the fish in the back of one of their pickup trucks, and drove to a nearby boat ramp to release the more than 5-foot long fish since it was still alive. Warden Martin Matthies placed the fish in the water at the boat ramp and watched the sturgeon slowly swim away. It is unknown if the fish survived the stress of being out of the water for an extended period of time. University of California-Davis fisheries scientist, Ryan Rypel, told The Bee it was a long shot for the fish to live.

Green and white sturgeon can live to be 60 years old. They spawn in Central California rivers, but spend most of their lives in the Pacific Ocean. Special state-issued licensing and reporting are required of anglers targeting white sturgeon. California only allows three white sturgeon to be caught each year by an individual angler (there are also size requirements for keeping them). Green sturgeon are protected, must be kept in the water at all times, and immediately released. Due to damning in Central California, green sturgeon can only spawn on a small stretch of the Sacramento River. They became an endangered species in 2006.