It’s hard to imagine a more diverse mix of students than the 12 enrolled in the first college-level professional hunter... 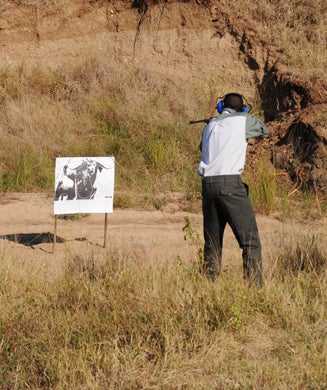 It’s hard to imagine a more diverse mix of students than the 12 enrolled in the first college-level professional hunter program in South Africa.

One student is the son of a Zambian professional hunter. Another is a child of Soweto, the sprawling South African township that is synonymous with the crushing poverty of the country’s black majority. Another student is a Zambian prince. And the only experience with hunting that another student has is a summer spent as a nuisance-animal officer, spotlighting eland and kudu in commercial grain fields. Two students are white. The others are black.

But these dozen students, all enrolled in the Professional Hunter Training Course at the Southern Africa Wildlife College, represent a new brand of wildlife manager on the continent. Historically, professional hunters–the African equivalent of a licensed hunting guide–have been white Afrikaans, who often inherited the job, and the title, from their fathers.

In South Africa, Namibia, and other sub-Saharan countries, the threshold to become a licensed PH is fairly low. Prospective professional hunters must pass a written and practical exam and then serve an apprenticeship with a working PH.

That traditional PH route has worked well enough, but Theresa Sowry, the president of the SA Wildlife College, says it may not be the right model for the future.

“You look around at what’s happening with wildlife right now in Africa, and it’s not a bright picture,” says Sowry. “In Botswana, trophy hunting has been banned. In Zimbabwe, traditional hunting is going away. Any time that hunting is taken away from a community, the value for wildlife goes away. Then you have unsustainable subsistence hunting, commercial poaching, and habitat destruction. Without hunting, and the community support and income that it provides, our wildlife areas would collapse.”

Her solution is to create a program that recruits non-traditional students into a professional hunter course, and then work to place these students in the hunting industry. The 12 students in the SAWC’s first PH program will determine whether that model works.

“We hope to transform the hunting industry in southern Africa from one that’s more broadly acceptable,” says Cleve Cheney, the SAWC professor who directs the PH program. “But from a practical standpoint, we hope to modernize the PH culture, developing a new standard of training for professional hunters and raising its profile as a real industry with rigorous requirements.”

It’s a model that has broad appeal. The PH program at South Africa Wildlife College receives funding from World Wildlife Fund, the South African Lottery, and also from Aimpoint, the Swedish sight maker. I visited there with Ben Carter, the CEO of Dallas Safari Club, which also makes a sizeable grant to the college and its professional hunter program.

“Dallas Safari believes in this program and supports it because if native people aren’t actively involved in the sustainable-use model of conservation in Africa, then the future of hunting and wildlife on that continent are both uncertain at best. We believe an inflow of young, indigenous professional hunters will help. On their own land, or as an employee of other landowners, these students will have learned, and seen first-hand, all that hunting does for good conservation in Africa,” Carter says.

CHALKBOARD HUNTING
Ben and I spent a day at the college earlier this summer, learning about the curriculum, meeting the students, and critiquing the program that supporters hope creates a new, more racially and culturally diverse African PH.

The instructors are thorough, solid, and sincere. The head of the PH program, Cheney, was a Kruger National Park ranger for 20 years before joining the faculty of the Wildlife College, and he brings real-world experiences to the classroom. If I have a critique it is that because their professor has never served as a professional hunter, working PH’s might dismiss his students’ education as more abstract than practical.

That’s a common complaint in any profession. And, indeed, on the surface, the PH program seems like any other undergraduate wildlife management course. There are units on ecology and ethology (animal behavior), the role of hunting in conservation, reptile and plant studies, and wilderness first aid.

Each unit lasts from a couple of weeks to a month. In all, the PH program extends over two intense years, and upon graduation, each student should be equipped to not only pass the PH certification test, but also to apprentice under a working PH.

**
FIELD EXERCISES**
I talked to a number of students in the program, and each noted that they wished the program was even longer. Was that because they feared leaving the ivory tower (actually, in the case of the Wildlife College, located inside Kruger Park, it’s more of a leafy tower), or because they weren’t yet ready for the working world?

A little of both, they said, but they also noted that they had learned so much in their first year of the program that they were acutely aware of how much more there was to know. That sounds like the honesty of any knowledge-hungry college student mid-way through his or her tenure in school.

But one way that the SAWC program hopes to transform these non-traditional hunters into PH’s is by offering them a huge dose of field work. As part of every unit, the students go into the thousands of acres of Kruger Park surrounding the campus and work on a practical aspect of their training.

On the day I visited, the students participated in one of their daily “hunts,” or practical field lessons. We gathered outside the walls of the college compound – walls that are wired with high-voltage electric lines to discourage lion attacks.

The purpose of the field exercise is to learn to read tracks, to stalk animals, read animal behavior, work with a “client” (usually a fellow student), and even kill animals. Students have culled several dozen elephants, rhinos, Cape buffalo, and hippos. And they’ve removed four leopard and several lions.

Other elements of walks include target shooting, usually with .375s, first-aid simulations, and plant identification.

As Gawie Lindeque, the assistant professor who leads these treks, told me, “These are not frivolous walks. Every time we leave the school, the students are aware that something could go wrong. We could be charged. We could be dealing with a wounded animal. We could be forced to spend the night outside.”

LION SPOOR AND RHINO DUNG
I was well aware of the potential for plenty of wildlife sightings as we walked away from the campus. Because it’s located inside the perimeters of Kruger Park, wildlife is largely protected here. Driving into the campus, we saw herds of impala, a trio of (mostly) pacific elephants, troops of baboons, and a few wildebeest and hartebeest.

We knew apex predators must share the landscape with the prey, and the firepower we took on the walk confirmed it. Lindeque carried a .375 H&H. His student, Leslie Long, carried another. And another student carried a .300 Win. Mag.

Within the first half mile of walking, we had found giraffe prints, a rhino wallow, and we tracked a herd of buffalo that included spoor from one animal that dragged a front hoof. “That’s a wounded old dagga boy,” explained Lindeque.

“We should keep our eyes open for him, because he’s notoriously cranky. I expect we’ll have to kill him one day, probably soon. Maybe today.”

We inspected huge dung piles deposited the previous day, analyzing their contents for forage preferences. Lindeque picked up a twig from one pile, and held it up. It had a 45-degree slice in its limb, almost as though it had been clipped by mechanical trimmers. “It’s rhino,” he explained to his students. “Elephants will chew a limb off a tree, and it looks almost crushed. Rhinos bite, and this clean bevel is indicative of that.”

SUSTAINABILITY
Whether the Wildlife College’s PH program ends up transforming the culture of African hunting remains to be seen. But as I left, Sowry told me that there’s evidence the program is already changing the conversation within the hidebound culture of traditional PH’s.

Sandy MacDonald, one of the most prestigious African PH’s, has enrolled his son in next year’s program.

As for Sowry, she takes a long view of the experience she offers students.

“We hope we’re transforming not just an industry but a whole culture,” she says. “Our students might become professional hunters, but they might also become wildlife guardians, or future leaders of conservation organizations. We hope we are providing a path to alternative livelihoods, not just for our students, but for any African involved in the wildlife economy.”