Watch: Mountain Lion Captured After Officer Chases It Past a Hair Salon in Southern California

The cougar seemed just as spooked as the shoppers, and the 113-pound cat was tranquilized after it ran into a nearby office building 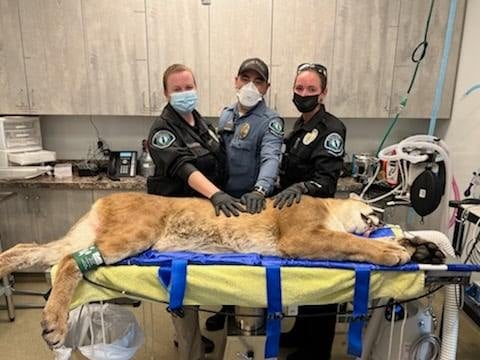 A big cougar raised a ruckus in a Southern California shopping center on Wednesday as it ran past a hair salon in Sand Canyon Plaza. Elliott Matthews, an employee at the Irvine salon, captured video footage of an officer chasing the 113-pound cougar. Matthews then closed the front door, and the shop went into temporary lockdown while authorities worked to contain the animal, the Orange County Register reports.

“Surprisingly, people were still getting their hair cut,” Matthews told the Register.

Wildlife officers with the California Fish and Wildlife Department responded to the scene along with the Irvine Police Department’s Animal Services. The big cat eventually ran into a nearby office building, where it had no means of escaping, and a veterinarian with IPD Animal Services was able to get close enough to tranquilize the cat with a dart.

The sedated cougar was then transported to a local animal care center, where officials determined that it was a male around 16 to 20 months old. It was fitted with a GPS collar and, according to Irvine PD, the cat will soon be taken into the nearby mountains to be released in suitable habitat.

The Irvine Police Department said in a Facebook post that “it is uncommon for a mountain lion to be seen in Irvine.” But as the local newspaper pointed out, a mountain lion was spotted swimming in nearby Lake Mission Viejo just last weekend.

“It wasn’t clear if it was the same cougar,” the Register reported, “but it’s possible given the proximity and timing.”