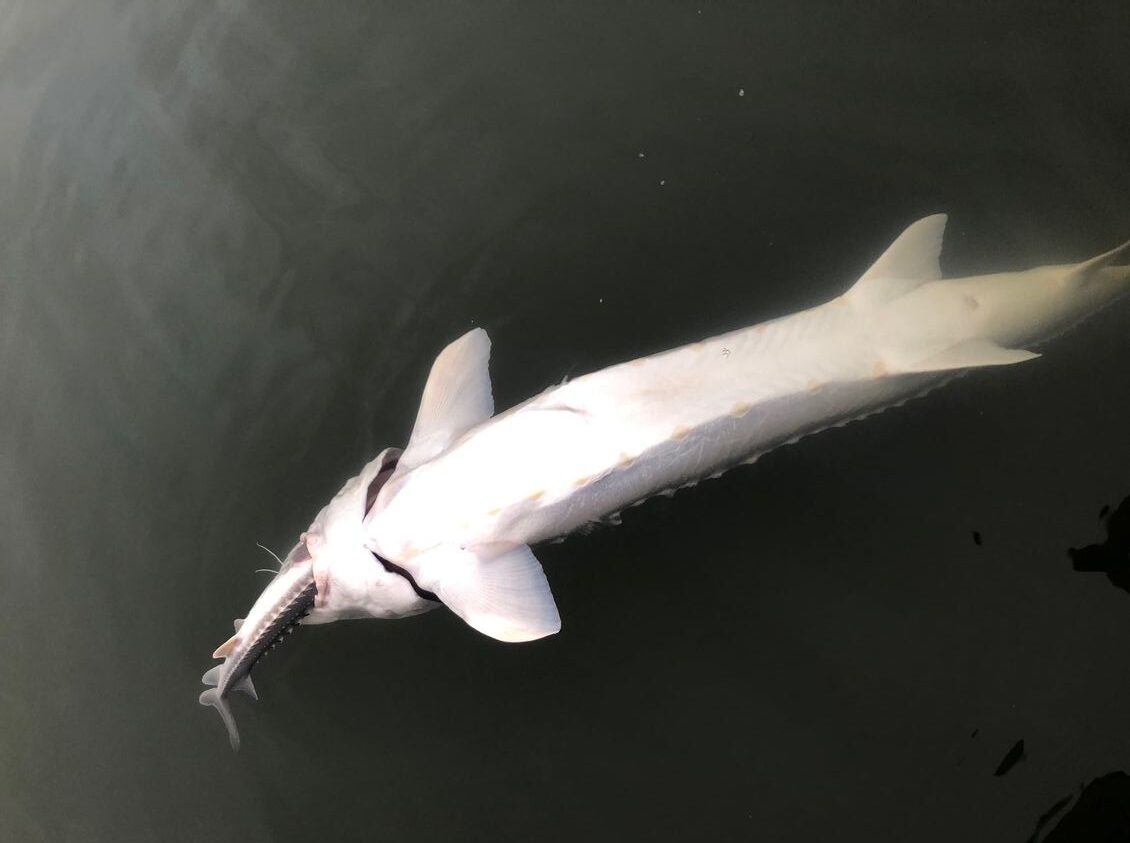 A white sturgeon was observed with another, smaller sturgeon lodged in its mouth. Fraser River Sturgeon Conservation Society photo
SHARE

Fraser River Sturgeon Conservation Society volunteer Colin Bond was boating upriver near the Golden Ears Bridge, which spans the Fraser River in the Vancouver metro area, when he noticed a large fish floating belly up at the surface. As he got closer, he confirmed it was an adult white sturgeon that looked to be about five or six feet long. As he neared the fish he saw that a second, smaller sturgeon was in the larger sturgeon’s mouth.

It looked to be about 1.5 feet long, with only its tail and part of its body visible. The entire head and forward part of the smaller sturgeon was in the larger fish’s mouth. Bond, a sturgeon tagger for the FRSCS, wrote about his encounter on the organization’s Facebook page. He characterized it as a new and potentially alarming insight into the river’s white sturgeon population, which has been in decline or years.

“I have been fishing white sturgeon in the Fraser for over 30 years, and I have seen many interesting and surprising sights, but I had never seen anything like this,” wrote Bond, who is an expert on the river’s white sturgeon and has volunteered for FRSCS for 16 years volunteering. He has sampled over 1,200 sturgeon for the group’s lower river assessment program, and is a solid judge of fish size and condition. “The big fish looked to be dead, and so did the smaller fish that it swallowed. They were both floating downstream, the big fish was on its back with its pectoral fins spread out. Neither were moving. The large fish appeared to be rather thin and skinny for its size. I circled around the fish and took a few pictures.”

Bond got closer, assuming the larger fish was dead, the body was rigid and unmoving, gills flared.

“The small fish, with its tail hanging out of the large fish’s mouth, was also rigid,” says Bond. “Then, suddenly, the tail of the small fish started to twitch. It was alive.”

Bond tried to grab the larger fish by a fin, but as soon as his hand closed over the fish it jolted back to life, thrashed, flipped over, and with the smaller fish still in its mouth swam down and out of sight into the depths.

“It came to the surface briefly [again] and made one final splash, then went under, and I never saw either fish again,” Bond wrote.

“This observation of possibly cannibalistic behavior is a first for adult fish,” executive director of the FRSCS Sarah Shreier told the Victoria News. “It’s a big concern for the overall health of the Fraser River. … We know fish do this when there is a low food supply, and there is definitely low food for sturgeon in the Fraser given the issues with salmon and eulachon [smelt]. So, although we haven’t seen it before, it is possible due to those factors. Lots of other aquatic species also do this when they are short on food.”

Colin Bond is on the Fraser regularly, and says he’ll keep watching for the pair of sturgeon he spotted.

“Hopefully they will both survive and maybe someday I or another volunteer will sample one or both of those fish,” he said. “I know I will keep an eye out for a six-foot sturgeon with a very, very sore throat, and a smaller one with a serious headache.”