It’s not every day that an armor-plated, prehistoric-looking fish sloshes ashore on Revere Beach, north of Boston 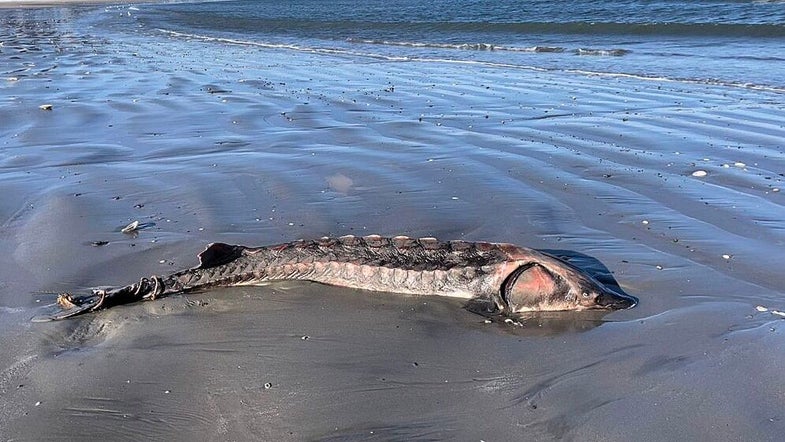 Massachusetts resident Erik Haigh was walking Revere Beach when he spotted something he first thought was an automobile tire. But as he got closer he saw that it was much bigger than a tire—and it was alive.

“It looked like prehistoric, like a living dinosaur,” Haigh told NBC-TV 10. “I’ve never seen something that looked that way. It was almost armor-plated, and I thought it had like a sort of pointy snout, so I was like, This is not your average fish that you would see washed up on Revere Beach.”

Haigh saw the fish’s gills were moving so he knew it was alive. He tried to move the 5-foot long fish back into the water, and in doing so noticed a thick, heavy rope was wrapped around the fish’s tail. He notified state officials about his find and posted photos of the fish online to try and learn what type of dinosaur-like fish he’d discovered on Revere Beach.

Haigh later learned that it was a sturgeon, either a shortnose sturgeon or an Atlantic sturgeon, both of which are classified as endangered species and protected by law. Fisheries officials say the shortnose sturgeon is the smaller of the two species, growing to about three feet, and living chiefly in rivers. So Haigh’s find likely was an Atlantic sturgeon, which commonly grows to 9 feet, and can weigh 800 pounds and be 13-feet in length. The Atlantic also sturgeon lives most of its adult life in marine environments, though it ascends freshwater rivers for spawning.

The sturgeon didn’t survive the ordeal, and state officials are trying to determine how the fish washed onto Revere beach, and what caused its demise.

Marion Larson with the Massachusetts Division of Fisheries reported that state biologists were concerned that the fish had a rope on its tail, which seemingly showed someone placed it there with perhaps illegal intent.

“It was a special thing to see, but a little sad because it was dying,” Haigh said. “Hopefully, if more people have sort of an awareness of this type of fish, maybe if they see one in another circumstance, they could do a little to help it.”