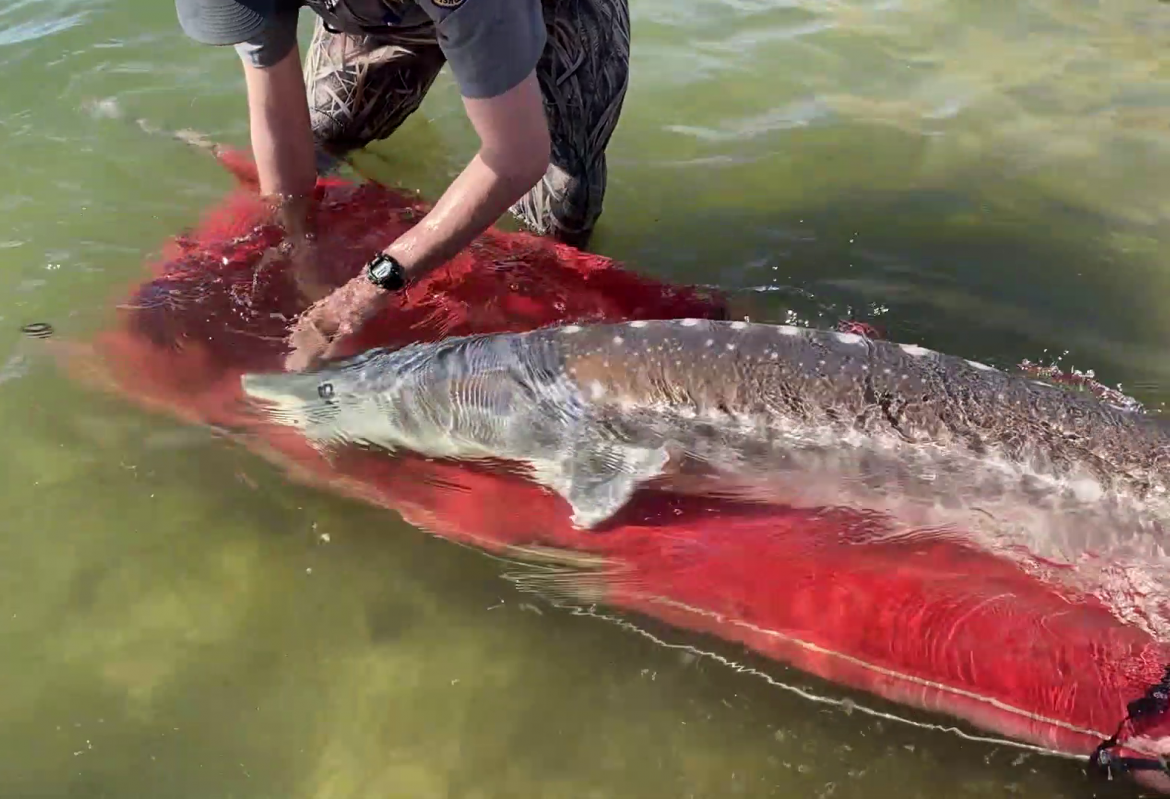 An angler fishing for trout spotted a big white sturgeon trapped in Milner Canal near Murtaugh, Idaho and set into motion a sturgeon rescue mission. On March 25, he contacted Idaho Fish and Game, and a state fisheries crew was dispatched to the canal to catch and relocate the sturgeon.

The 7-foot 9-inch sturgeon was captured by fisheries staff and removed from the canal with a special sling so the fish would not be injured, according to a press statement from IDFG. The crew moved the sturgeon to nearby 11,000-acre Lake Walcott, a reservoir on the Snake River, and released it unharmed.

The sturgeon is estimated at about 30 years old and was originally stocked by the IDFG into the Snake River to improve angling for the species, according to Mike Peterson, Regional Fisheries Manager for the IDFG Magic Valley office.

“This was a stocked fish put into the Snake River by IDFG in 1992 or 93 when it was 18 to 24 inches in size,” said Peterson. “We stock sturgeon upstream in the Snake River to improve angling for them and have released fish for years above Lake Walcott to Idaho Falls. We know that some stocked sturgeon are moving downstream, and we believe this fish that got trapped in a canal is one of the stocked fish we released decades ago.”

“We know it was a stocked fish because there is no natural sturgeon reproduction above Shoshone Falls, some 30 miles distant,” he said.

Peterson doesn’t believe the sturgeon would have died in the canal, but transporting the fish to Lake Walcott and releasing it was the best outcome for the fish.

The sturgeon was examined, measured, and tested by biologists and fitted with tags to identify the fish in the future.

“If that fish is ever captured again, we’ll know it from the tags and information we got from the fish when we moved it from the canal to Lake Walcott,” says Peterson.