An aggressive gator tries to chase down a Florida fisherman 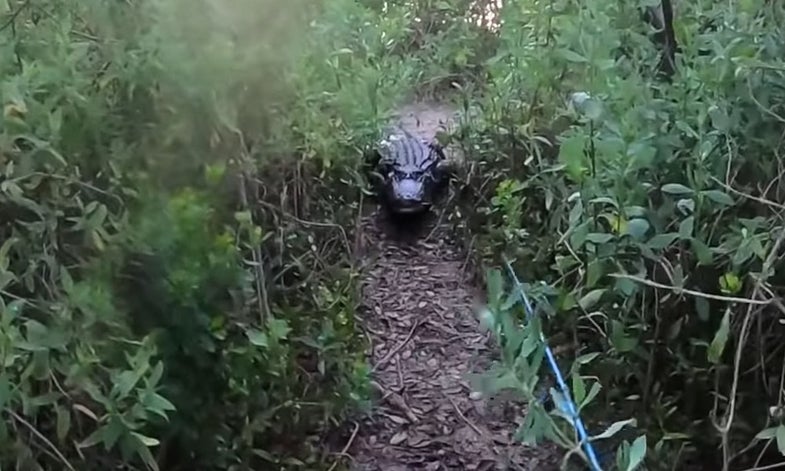 Tommy Lee, 22, was prowling thick mangroves beside a tidal pond in the South Florida Everglades casting for tarpon when suddenly an oversized and overly-aggressive alligator decided that the young fisherman should vacate the area, according to Florida Fox News.

In a now viral YouTube video with over a million views, Lee (wearing a GoPro camera) is seen casting mangrove edges with a spinning rod while standing on a wide trail leading to the pond. He makes several casts, then starts backing up away from the pond as a huge alligator is seen swimming at the surface directly toward him.

“Jesus Christ. You gotta be careful here,” he says just as the gator rises out of the water crawling quickly onto the bank coming towards Lee.

Lee backs farther into the mangroves from the gator, but the animal continues its pursuit.

While trying to get away from the gator down the narrow, brush-line trail Lee stumbles dangerously backwards.

He luckily gains footing, while saying, “well, that puts an end to my tarpon fishing.”

The gator stops on the trail while facing Lee, and they stare at each other a short distance apart for long seconds.

Finally Lee yells “get back” to the gator trying to startle it and make it leave. But the gator comes again and Lee backs away faster down the brushy trail, exclaiming “oh my God.”

The gator turns back toward the water, Lee stops, then follows it, calling “Hey buddy.”

But the gator slips back into the water and is gone.

Lee looks carefully at the pond where the gator entered, and as the video ends says, “I am out of here, screw that.”

Lee said the gator got to within 10 feet of him.

Spring is alligator mating season, making the animals most aggressive as males seek mates and females guard their nests.