A long, thin wire from a bottom-bouncer rig penetrates an angler’s heart in a freak fishing accident 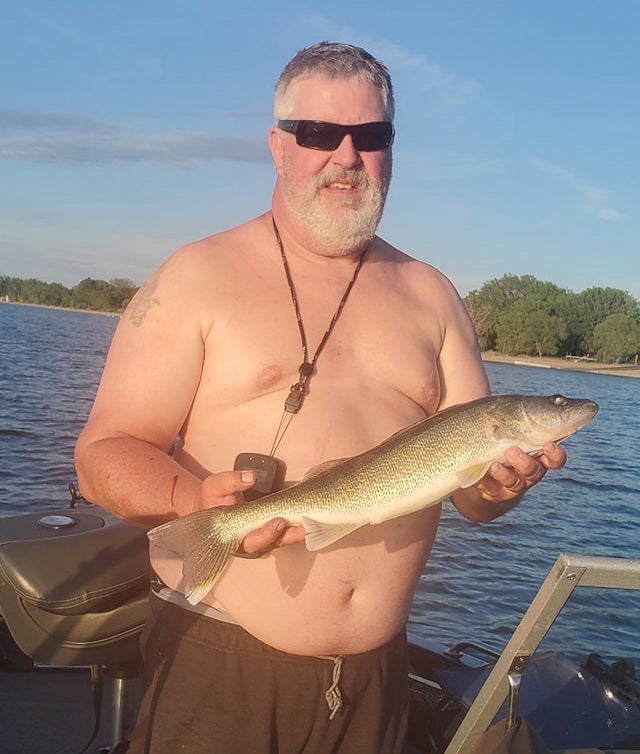 Todd Thesenvitz was fishing with his wife and daughter near Clark, South Dakota, earlier this month when he hooked a strong fish with a bottom-bumper rig and worked it close to his boat. It was a good northern pike. But as his wife went for the net, the fish made a sudden move and broke off, sending the line and rig back into the boat like a slingshot.

“I see the bottom bouncer come flying towards me like in slow motion,” Todd told reports KELO-TV of the freak fishing accident. “I thought it just hit me in the chest, but I realized that it was stuck inside me.”

“I moved to put the net away since we didn’t need it anymore when Todd screamed, ‘OH! My chest!!’ (Anyone who knows him knows this could have been a joke!),” his wife Marie wrote in a Facebook post. “Keanna and I turned, looked and went immediately into crisis mode. The bottom bouncer [had] penetrated his chest.“

A wire of the rig lodged between two ribs and into his heart. Todd wanted to remove it, but his daughter Keanna is a nurse and stopped him.

“I just knew how serious it was,” Keanna told KELO-TV. “I really thought I was going to lose my dad that day.”

The Thesenvitzes called 911, and Keanna helped her dad lie down on the floor of the boat and remain calm. Meanwhile, Marie worked to get them back to shore.

“I reeled the other lines in and got the trolling motor up and the big engine started. (I had NEVER driven the boat before now),” Marie wrote on Facebook. “It took us about 13 minutes to follow the GPS back to the boat ramp. I couldn’t go as fast as I wanted because it was too painful for him.”

Marie Thesenvitz drove the boat back to the boat landing, which was filling with first responders as word spread about Todd’s condition.

“The dispatch lady said she was sending everyone and boy did she!! They helped land the boat got Todd onto the gurney and into the ambulance where they stabilized the bottom bouncer and were quickly in route to Prairie Lakes hospital in Watertown 30 miles away.”

Keanna says the EMS crew stabilized the bottom bouncer still stuck in her dad’s chest by clamping and taping the remaining part of the wire rig to his chest. From Watertown, he was airlifted to Sioux Falls for life-saving surgery. The bottom bouncer wire arm went into Todd’s left heart ventricle, and into the heart muscle. If the wire had been removed immediately after the accident, doctors said, Todd would have bled to death in half an hour.

Read Next: Rancher Pinned Under ATV for Two Days Survives on Beer

“The surgeon was very blunt and said there was no reason Todd was still alive,” wrote Marie. “If anything had gone any different from the second it happened until he was on the OR table he would not have been able to save him.”

“One in a million chance that this would ever happen,” Todd said of the freak fishing accident. “And I just feel awfully lucky that everything went the way it did.”