Survival Skills: How to Peel Tree Bark to Make a Container

Did you ever notice how easy it is to strip off a chunk of tree bark in the late spring... 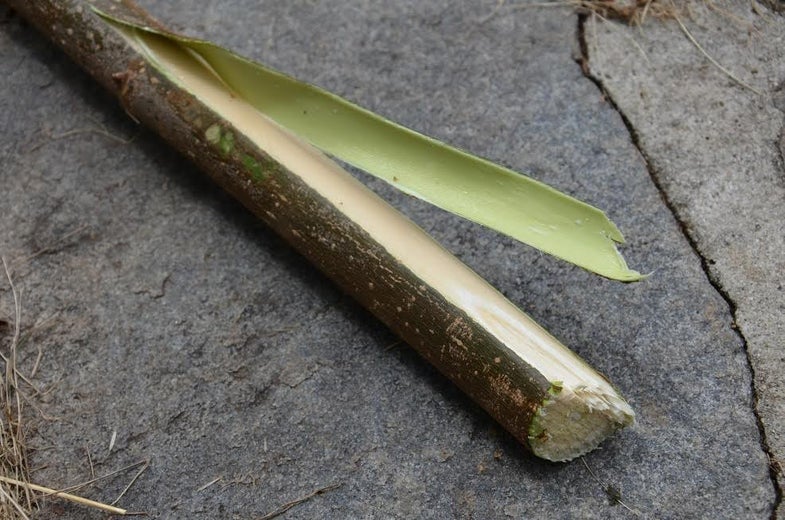 Did you ever notice how easy it is to strip off a chunk of tree bark in the late spring or early summer? That phenomenon is due to the bark temporarily loosening as the tree gets ready to put down another growth ring. This is the perfect time to peel bark for containers and for other uses. Bark containers have been used for thousands of years, and are found worldwide. From the birch-bark canoes and maple-syrup buckets of the Native Americans in the Northeast, to Aboriginal bark cooking pots in Australia, the containers have been as diverse as the people who have made them. Bark containers also give you a strong and versatile container to use for survival purposes in the wilderness, especially if your normal gear has been lost. But that’s not all. Some bark strips make fine cordage. Skinned sections on trees have also been used for centuries to mark an area or blaze a trail. In fact, the very first mountain man rendezvous site in the Rocky Mountains was marked by skinning trees at the fork in a river. This way, the trappers knew where to congregate by seeing the white wood visible after the trees were peeled. In 1825, William Ashley (one of the fur trade suppliers) wrote this: “…that the place may be known—trees will be peeled standing the most conspicuous near the junction of rivers.” The tree bark is peeling right now, here’s what you can do with it.

When it’s peeling, you can collect tree bark from trees like tulip poplar, basswood, and hickory that have a flexible bark. Select a young tree with thin bark. The tree should be less than 6 inches in diameter for best results. Also, make your selection in a thicket if possible, to open it up for the benefit of the other trees. If you have a hatchet or saw, cut the tree down and drag it out of the thicket. In a primitive survival scenario, you can use a sharp rock that weighs about a pound as a bark chopper to remove the bark without cutting the tree down. If you’ve cut the tree down, cut around the tree about 2 feet up from your felling cut. Then score a line parallel to the trunk which connects the two cuts. Mimic those cuts while the tree still stands, if you are using a stone chopper. When you’ve finished your cuts, carefully peel the bark off, and then you’re ready to make a container.

Getting the bark skinned off the tree was the worst part; making the container isn’t usually too hard. My favorite bark-container style is commonly known as a “berry bucket.” To make it, you scratch a football shape on the inside of your freshly peeled bark. Put it in the middle of your bark, with the “points” of the football just touching each edge of the bark. Fold the bark in half, allowing the scored section to bend freely, and tie the bucket together with cord or rope. Make this style of bucket short and wide to act like a basket. Make one long and slender for a nice arrow quiver that’s already camouflaged for the forest. Your only limits are the flexibility of the bark and your creativity.

Have you ever peeled bark for a project? Tell us what you made by leaving a comment.