Campfires are all fun and no smoke with the Solo Stove 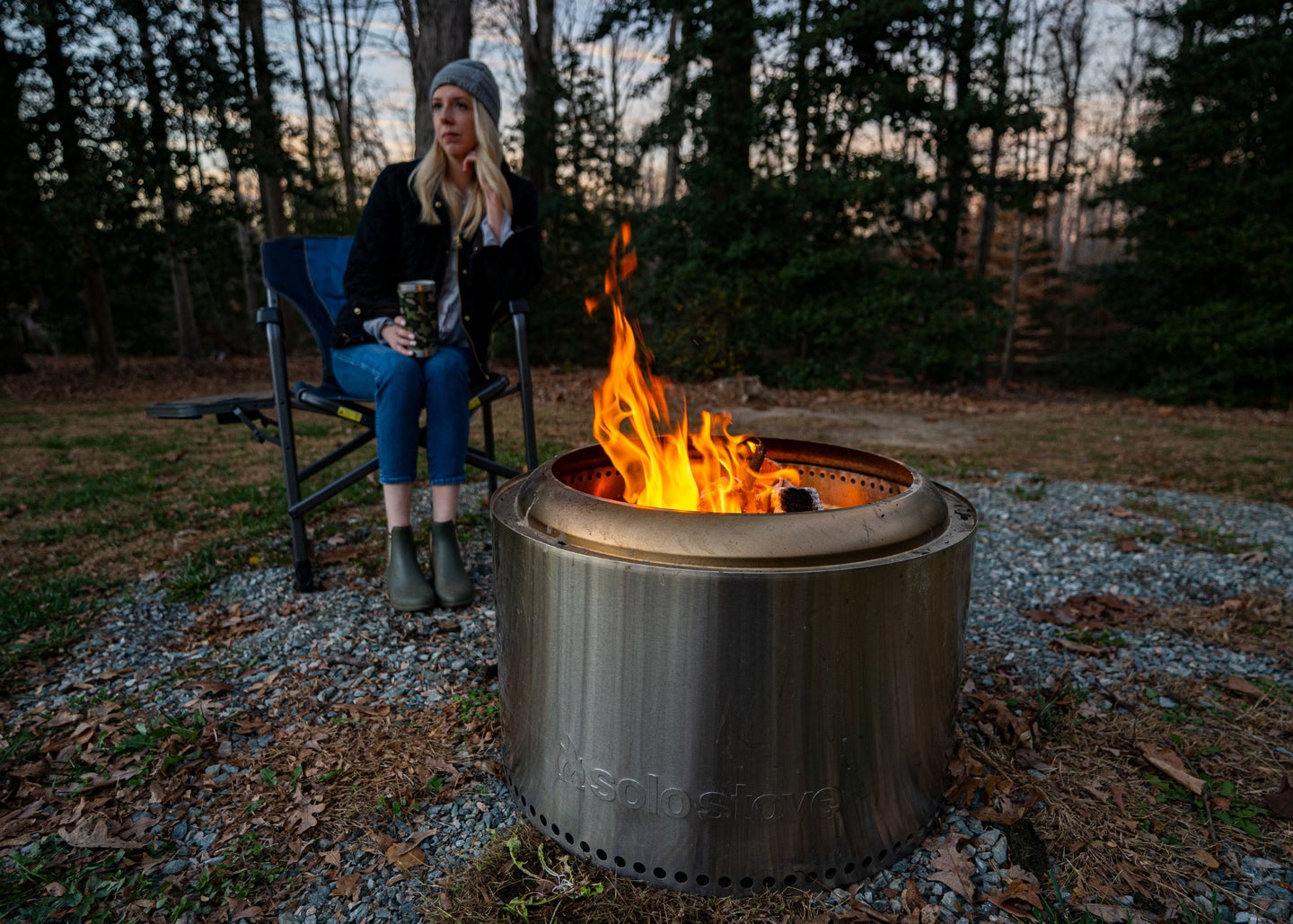 While it isn't cheap, the Solo Stove is a high-quality wood-burning fire pit. Scott Einsmann
SHARE

If you love a campfire but hate coughing on smoke every time the wind shifts, a smokeless fire pit like the Solo Stove is a great option. I bought one for that very reason, and after nine months of use, I was able find plenty of pros (and a few cons) with the Yukon model that I tested.

The Solo Stove Yukon is designed to promote airflow, which creates a more efficient burn and less smoke. The lack of oxygen and the rising hot air created by the fire pulls air through the bottom vents, bringing more oxygen into the fire pit. The air comes up through holes in the base of the pit, as well as through holes at the top.

There are three Solo Stove sizes. The Yukon is the largest, and it’s the one I’d recommend if you want a permanent fire pit. The medium size, called the Bonfire, only fits logs up to 16-inches long. The Ranger is the smallest size and is a good option if you need a portable fire pit. It’s just 15 pounds, 12.5 inches tall, and 15 inches wide.

There are two key Solo Stove accessories you should consider. The first is a rain cover, which they call Shelters. The second accessory is the Solo Stove Stand, which elevates the fire pit so you can use it on heat-sensitive surfaces like a deck.

Read Next: Breeo vs Solo Stove: Who Makes the Best Smokeless Fire Pit?

I didn’t get a Solo Stove to do a review. I bought it as a birthday gift for my wife. But, we enjoyed it so much this summer that I decided to review the Yukon. I burned seasoned hardwood logs for the first seven months. Under those conditions, it performed as advertised. There was minimal smoke, and because it burns so efficiently, there’s very little ash or debris to clean out.

I decided conduct a series of tests to answer some of the common questions and concerns people have about Solo Stoves. The first was to test the smokeless claims. If you’re using seasoned firewood, you’ll get smoke when you start your fire, but you’ll have a smoke-free fire once it gets going. Then, as the fire burns down, you’ll have a little smoke.

The Solo Stove delivers on its promise. It provides a smoke-free fire experience. But, I wanted to push the envelope and kick up some smoke using green wood and leaves. With that combo, I created a smokey fire, but it didn’t last long. The key to the Solo Stove’s smokeless quality is that it burns very efficiently, so it quickly turned the leaves to ash and burned the green wood.

Another question I wanted to answer was: Does the outside of the Solo Stove get hot? I got a fire going and let it burn for 30 minutes. I then used a laser thermometer to measure the Solo Stove’s exterior temperature. The bottom remained cool around 70 degrees, and the temperature in the middle of the stove was about 120 degrees. The temp jumped to 230 degrees at the top of the stove. So, it’s best not to touch the upper half of the stove when you have a fire going.

The next test was to see how easy it is to cook over the Solo Stove. I used the grate off my charcoal grill, which happened to fit the Solo Stove perfectly. I boiled water and toasted bread to test both ends of the fire cooking spectrum—heat and finesse. I found cooking over the solo stove a lot like cooking over any wood-burning fire pit. It takes skill, but it’s very doable. Especially if instead of cooking over flames, you burn down logs to coals and then begin the cooking process.

How did the Solo Stove hold up after eight months outside? Pretty darn well. I’ve stored my Solo Stove outside using the rain cover. The stove still looks new, but the rain cover doesn’t look great. There are no tears in the rain cover—it’s just dirty.

The Solo Stove fire pit doesn’t produce much smoke. You’ll enjoy a campfire without the associated coughing and eye-watering that comes with smokey fires. It’s also effortless to clean up after enjoying a fire because you’re only left with a bit of white ash at the bottom.

The price is the main downside of the Solo Stove. At around $500, it’s not cheap. You can build a fire ring for a lot less, but the price of the Solo Stove is comparable to competitive smokeless offerings like Breeo.

The Solo Stove works so well because it burns wood efficiently, but that also means you’ll go through more wood. Another negative is that you can’t fit large pieces of wood in the Solo Stove. It’s restricted to logs 22-inches long or shorter. So, when you’re processing firewood, make sure you cut it short enough to fit inside the stove.

Q: Can you cook on the Solo Stove Bonfire?

The Solo Stove Bonfire is a fire pit first, but you can use it for cooking. Solo Stove also sells a dedicated grilling set.

Q: Can you set a Solo Stove on a patio or other surface without damaging anything?

Yes, you can put a Solo Stove on a patio or deck if you use the fire pit stand, which is an additional accessory.

Q: Does the Solo Stove really put out no smoke at all?

You’ll have some smoke as you start your fire, but once it gets going, there will be very little smoke.

Final Thoughts on the Solo Stove

In the world of outdoor wood-burning fire pits, the Solo Stove is at the top of the heap. You’ll pay for the quality, but if the features it offers are important to you, it’s worth the price. I’ve had mine for nearly a year and it continues to be the center of hangouts, great conversation, and a healthy amount of toasted marshmallows.