The ultimate guide to fishing the River2Sea Whopper Plopper 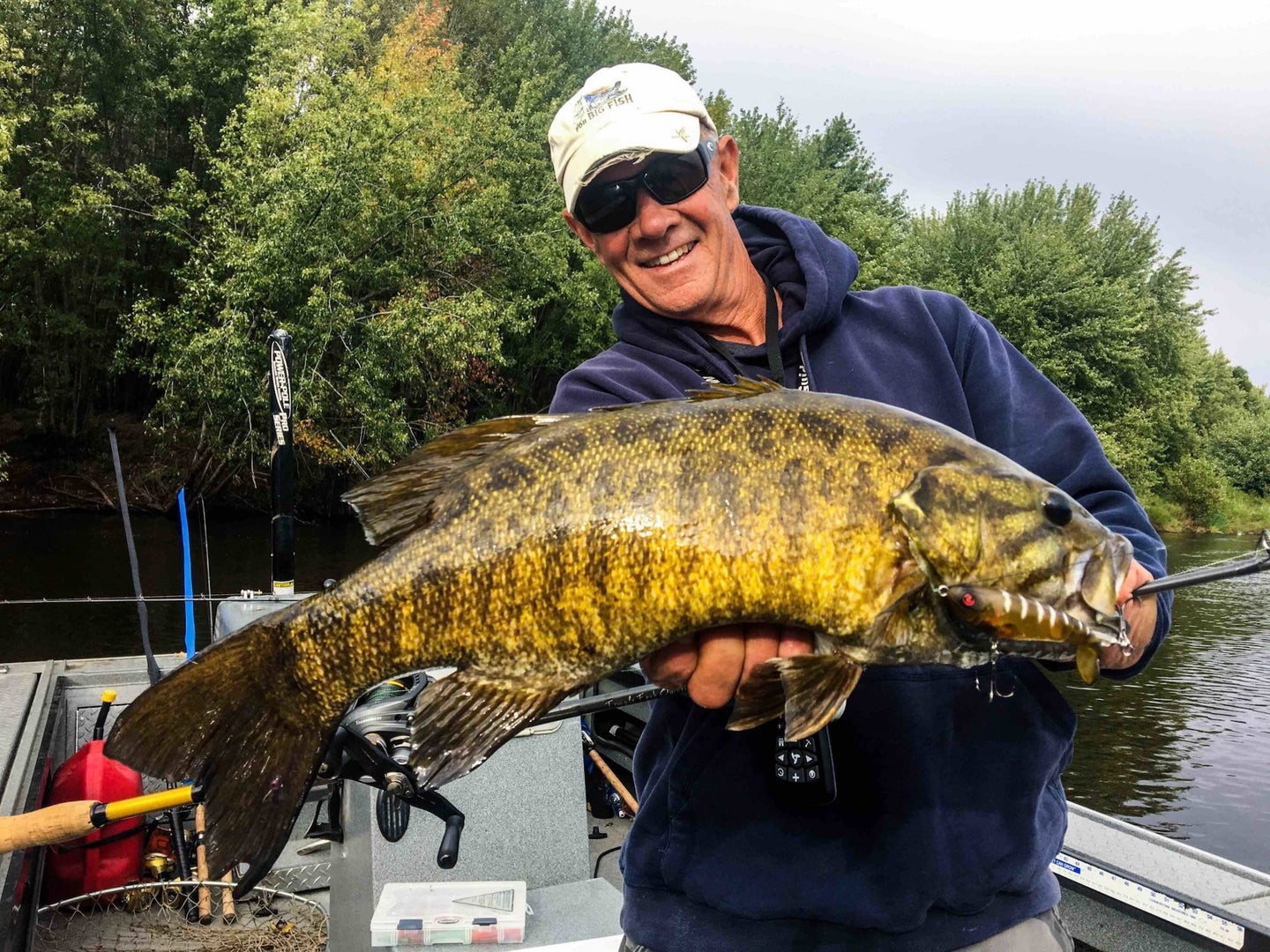 The River2Sea Whopper Plopper burst onto the international fishing scene less than a decade ago, and suddenly, bass addicts everywhere were unable to put it down. As the name suggests, the lure’s spinning section produced a continuous “plopping” noise that aggravated bass to strike like Amazonian peacock bass or vicious tropical tuna. From the late prespawn into the fall, it may not always be the single best tool for putting numbers of bass into the boat. But, the Whopper Plopper is definitely the most exciting, and often the most effective way for getting even sluggish fish to attack.

Even before River2Sea introduced the world to this very special bass lure, north country anglers were well aware of the tempting nature of this distinctive sound pattern. Any self-respecting musky angler had a variety of gaudy, hard-gurgling plopping-style baits in their boat—typically with a fixed, cigar-shaped front section, and a rotating tail by the back treble. For some reason, though, bass anglers hadn’t widely adopted this style of lure, even if the musky hunters often inadvertently landed the biggest bass of the season on a given body of water.

Bass anglers had cigar-shaped walk-the-dog topwaters like the Zara Spook and its descendants. They also had buzzbaits upon which a blade rotated on a wire. Except for a few novelty items that ultimately proved unsuccessful or unpopular or both, however, the two never met in a single product.

Into this mix came legendary globe-trotting multispecies expert Larry Dahlberg. Because he called Minnesota home, Dahlberg was well-versed in musky jargon and tackle and brought the lure to the River2Sea tackle company. Soon thereafter the product was released and as tournament wins and television exploits piled up, suddenly the Whopper Plopper was the most in-demand and most talked-about lure on the planet, that year’s version of the Senko or the Chatterbait. Bass that had never seen it before went absolutely ballistic, and while the novelty of the lure has dimmed slightly, it’s still a remarkably exciting way to get both tentative and aggressive fish to make a move.

River2Sea makes two basic versions of the Whopper Plopper. They both generate substantial noise on even a slow, steady retrieve, but one with small glass beads inside makes even more of a commotion. They come in a total of:

There is also a saltwater version. All of them are made to withstand the vicious strikes that this style of lure generates, with quality hook hangers and proprietary treble hooks. There are two dozen different color patterns aimed at imitating any available forage in a wide range of water clarities.

One of the best aspects of River2Sea’s Whopper Plopper is that just about anyone who can cast semi-accurately will be able to catch bass on it. Because of its aerodynamic shape—and comparatively heavy weight-to-size ratio—it can be cast a long way on appropriate tackle, even in a headwind or crosswind, situations in which the distinctive noise excels. Furthermore, the lure doesn’t require any tuning. The “propeller” on the back is molded in the perfect size, shape and attitude to work correctly right out of the package. Cast it out, reel it back, repeat. While you can alter your retrieve—from fast to slow, or anywhere in between, with stutter steps, slight pauses, and the occasional rip—the most important thing is to keep it moving. Unlike a popper or jerkbait, in which a lengthy pause is often the triggering moment, the Whopper Plopper gets its power from both its sound and the gurgling bubble trail that it creates. It will call deepwater smallmouths and spotted bass in gin-clear water, and also aggravate lazy stump-bound largemouths just the same.

The first time I threw the Whopper Plopper 130 was at Lake El Salto in Mexico when the impoundment was at flood stage, with water pouring over the spillway. I had heard about it from various professional anglers, but was still a little dubious that even comparatively uneducated bass would strike such a goofy-looking lure. My suspicion was short-lived, as a 6-pound largemouth came up from beside a clump of water hyacinths and scared the living daylights out of me. Repeated casts with buzzbaits and spinnerbaits wouldn’t elicit a strike but the first throw of the Plopper produced results. It wasn’t fast and furious, but at a time when the bite was relatively tough this lure outfished them all, with a constant stream of 4- to 8-pound suicide bombers attacking it seemingly from out of nowhere.

Since that time I’ve had success with it on the Amazon for peacock bass and wolffish, but where I’ve really dialed in the lure is on my home bass waters. On the tidal Potomac River, before the grass gets completely matted, it’s possible to run it over submerged aquatic vegetation, producing the first (and often biggest) topwater strikes of the year. On Buggs Island, I’ve guided it through flooded buck brush where others might throw a spinnerbait. And on various local clear water lakes, I use it to parallel long docks, or traverse the tips of boat ramps, to generate strikes. While typically I rely on topwaters most heavily during the low light hours, I often keep the Whopper Plopper on the deck of my bass boat all day. The occasional cast with the Plopper keeps the bass honest and can help you round out a monster limit.

What the Whopper Plopper Does Best

The River2Sea Whopper Plopper takes advantage of largemouth, smallmouth, and spotted bass at both extremes of the behavioral spectrum. If they’re super-aggressive and want to chase a lure, they’ll come a long way to destroy it. On the other hand, post-frontal or highly-pressured bass that are reluctant to bite even the most finesse-oriented presentations will sometimes attempt to make mincemeat of this gaudy, obnoxious lure. As the old-timers might say: “They want to kill it so it doesn’t reproduce.” Whether they’re hungry or territorial or just plain ornery, this is a lure that generates topwater strikes when you wouldn’t expect bass to break the surface of the water. That includes water temperatures down into the lower 50s, although the lure is at its best in the 60s or 70s.

What the Whopper Plopper Does Worst

While you can “steer” the Whopper Plopper through obstacles and objects, it does have two sticky-sharp treble hooks, so it’s a nightmare in matted vegetation. Even if you think you have lanes in the grass, invariably either one of the trebles or the rotating propeller itself will get bogged down, leaving you with a wasted cast. Everything needs to stay clean if you want to maximize your efficiency and your bites.

The Plopper also does not do particularly well when bass demand long pauses. Sure, you may catch one while the bait is at rest or when you’re picking out an otherwise-inopportune backlash, but that’s the exception, not the norm. And while it does OK in the prespawn and fall migration, this is not a lure you’ll rely on in the winter, except maybe in Florida, Mexico, or similar climates.

It’s key to match your chosen River2Sea Whopper Plopper not only to the size of the baitfish and the appetite of the resident bass, but also to the sound profile that they demand. The 110 size, for example, is not substantially smaller than the 130, but its tone is much less intrusive and boisterous.

As noted above, River2Sea has a wide range of color choices, including patterns that clearly mimic perch, bluegills, and trout. Those excel when you’re dialed into a particular form of prey, but remember that the bass are only looking at the belly of the bait. If it’s in low light conditions, you’ll want to create a distinctive silhouette. That’s why the various black models are so popular, including “Loon” and “Yellow Head,” which as the name suggests has a bright yellow tip of the nose. That may make it easier for the angler to track in waves or current. White or shad-oriented paint jobs, like “Powder” or “I Know It” are also popular for good reason. Bone is a solid all-around choice, especially in smallmouth country, as is Chrome, especially in clear water. Some anglers get their Ploppers custom-painted, but River2Sea produces a wide enough array that such extraordinary efforts seem excessive. Fortunately, if you do go to such lengths, it’s rare to lose one—you tend to use heavy line and they float—so the investment is unlikely to be squandered.

Speaking of tackle, many anglers throw the Whopper Ploppers on straight braid. You’ll need exceptional hook setting power at the end of a long cast, and because the lure is moving most of the time the opaque line shouldn’t spook even cautious fish. If that’s not your style, consider monofilament or copolymer lines, which have more stretch. Fluorocarbon, which sinks, is not a good choice.

You’ll want a rod at least 7-feet long—typically a baitcaster except possibly for the smallest sizes of Ploppers, and a high speed reel to keep up with the retrieve. While you can throw the biggest Ploppers on a flipping stick or otherwise broomstick-like rod, a little bit of give in the tip is preferable, to prevent you from pulling the rapidly-moving lure away from a striking fish. When using mono or copolymer, it’s feasible and advisable to go slightly stiffer on the rod choice than you would with braid.

Toward the end of the cast pull back just a hair on the lure to straighten it out, which will prevent the line from tangling in the front treble hook. Get the lure moving toward you immediately and be ready to strike – often the attacks come within the first one or two cranks of the handle. Most of all, don’t forget to check your hooks and split rings throughout the course of the day. While many fish will inhale the lure and impale themselves, those that swipe at it may require a bit more luck to get them in the boat – you enhance your odds of hooking them and keeping them hooked if your trebles are razor sharp. Consider 2X or 4X models if you’re fishing for toothy critters or using heavy braid, as otherwise they may bend out. Just be sure not to change the overall balance of the lure.

If imitation is indeed the sincerest form of flattery, then tackle companies are the most sincere industry on earth. Just as the River2Sea version of the Whopper Plopper was derivative of pre-existing lures, once it hit the bass world it spawned a host of copycats and successors. Some are remarkably similar to the “original,” while others put a new shine on the concept. They include:

Even River2Sea got into the act, creating a Double Plopper Buzzbait with mini propellers where the metal blades would normally go. Some anglers take those props off of the wire and peg them in front of buzz toads and other soft plastics for a weedless noisemaker.

Final Thoughts on the Whopper Plopper

At this point the River2Sea Whopper Plopper is no longer a secret, and bass on your local lake or river may have seen it, but that doesn’t mean it’s not an effective tool. Quite the contrary, even pressured fish still can’t resist it and aggressive fish want to punish it. Any time you have long expanses of water to cast and fish that are willing to break the surface to attack, this style of lure will complement or even replace the other topwaters in your tackle box. It takes some of the best attributes of a cigar-shaped topwater and a buzzbait and combines them into an easy-to-fish combination.