A Gentleman’s Wager on Kodiak Island 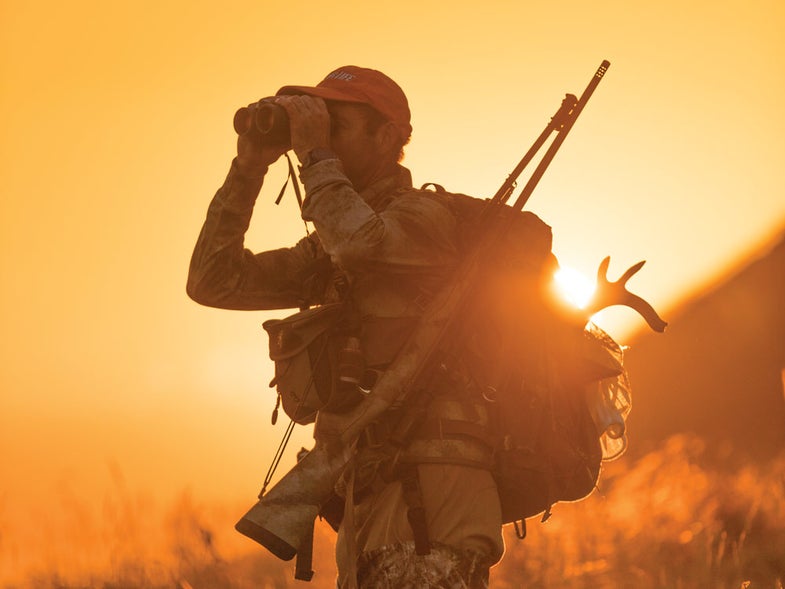 Kodiak Island rain is hard to take when you’re confined to a spike tent and your pickup plane can’t fly.

But it’s unbearable when you’re sitting around a table in Henry’s Great Alaskan Restaurant in the city of Kodiak, watching rain pound the windows, each fresh squall keeping you from filling the fat stack of hunting licenses in your pocket.

This is not how I wanted last October’s trip to Alaska to start, with me moping around town like a crabber without a boat. But being grounded had its upside. It turned my four buddies and me into base-camp gamblers.

“I propose a bet,” Steve said, as we ordered another round. “We have tags for caribou, deer, and ducks, plus we can shoot all the foxes we see, and we have licenses for fish and crabs. We need a point system. Bull caribou are 5 points, cows are 3. Buck deer are 2 points, does are 1. Fox and ducks are a point apiece.”

We all nodded, visualizing the backcountry bounty our tags represented.

“What are we playing for?” asked Ryan.

“How about this?” offered Rafe. “Whoever wins—accumulates the most points—has to grow a mustache. He has to show up at next year’s SHOT Show with a big, skanky ’stache.”

We are all friends from the shooting and hunting industry, and we’d all be at the Shooting, Hunting and Outdoor Trade Show in January as a function of our jobs. We all had professional reputations to maintain and, with the exception of Aaron, whose normal riot of facial hair was either evidence of his bohemian nature or total disregard for personal hygiene, mustaches weren’t in keeping with our images.

After a moment of consideration, we agreed to the terms of the wager, shaking hands while the North Pacific lashed Henry’s windows. I loved the audacity of it, a sort of anti-bet, one that none of us wanted to win, although each of us on this DIY hunt wanted to bag the biggest and most game of the bunch.

Grounded for a third morning, Aaron and I fished for arctic char just out of town before we all gathered with the locals at Big Al’s sporting goods store. Someone asked us what we were hunting, and Steve piped up about caribou.

Turns out our celebrated caribou were Laplandic reindeer introduced to the island back in the 1920s. Still, we had tags to hunt them, and “feral reindeer” had a perverse ring in keeping with our wager. Before we left the shop—in a dither because our pilot called to let us know the ceiling was lifting—we learned that duck season on our side of the island wouldn’t open for another week. We wouldn’t need the Browning shotguns we had packed, after all.

The plan for this hunt was first to get dropped by floatplane on the southern tip of Kodiak and spend a few days hunting reindeer. When our tags were filled, we’d radio Mike Flores, whose Ninilchik Charters runs a 48-foot tender boat, the Sundy, big enough to sleep the five of us. We’d get picked up by plane, dropped off at the Sundy, and spend the rest of our week hunting Sitka blacktail deer from the boat and fishing. But the rain delay cut our time in the field nearly in half.

Once we landed in reindeer country, we set up camp, erected an electric bear fence, then hiked to high points to glass for animals and watch for brown bears. We never saw a reindeer (or, gladly, a bear), but it turned out the mountains above camp were full of big blacktails. Rafe and I each killed nice bucks—taking the lead in the mustache bet—while Steve bagged a fox.

After two days of reindeerless hunting, we climbed to the highest peak and called Flores for a floatplane pickup the following morning. Hiking back to camp, Aaron spotted what he thought was a drop-tined buck tucked back in brush. It was hard to confirm the sighting, and Ryan and I doubted Aaron’s field skills. After all, Aaron didn’t even have a rifle. He was along primarily as our photographer and videographer. Still, field traditions abide, even deep in the bush, and whoever first spots an animal gets first dibs on it. I handed over my .300 Short Mag.

After a short stalk, the buck flushed and Aaron made a sweet offhand shot. As we approached the dead deer, our jaws dropped. It sported not one, but two drop tines. Its thick, gnarly antlers were covered in velvet and little polyps and warts. It was the largest blacktail I’d ever seen.

“Looks like it’s covered in barnacles,” I quipped, envious that our photographer had killed what would undoubtedly be the buck of the trip. My consolation: Aaron would look sick with his hipster whiskers sculpted into a gunslinger’s mustache.

The best way to describe the rest of the trip was as a race to not win the facial-hair contest. As we butchered deer meat on the stern of the Sundy, we jigged for halibut while glassing for bucks and fox. Ryan caught the only halibut. Crabbing was a bust. It was hard to look at the 50-pound meat boxes sitting empty on the deck with anything but disappointment, given our expectation of a turf-and-surf extravaganza.

On our final day in Alaska, Steve killed a blacktail doe, and then Rafe took the lead when he killed a beautiful apricot-colored fox as it trotted along the beach at low tide. Rafe was visibly uncomfortable at the prospect of growing what he called a “pornstache,” so it was no surprise that when he spotted a little spike buck from the boat, he was in no hurry to go after it. Aaron and I looked at each other, and raced for the little inflatable Zodiak to take us to shore.

We beached the boat, quietly slipped .300 WSM cartridges into our Hell’s Canyon rifles, and peeked over the tidal berm into a swampy bog. There was the spike, and just behind it, another deer. Aaron dumped one while I swung on the second.

It was clear, as we walked up to the deer in the fading light, that both were tiny bucks. Mine sported two pencil-thin antlers—one of the smallest spikes I’d ever seen, let alone killed. Then Aaron lifted the head of his buck. It had only one twig-like antler, a half spike.

Read Next: Bucks From a Boat: Hunting Blacktail Deer on Kodiak Island

“That settles it,” Aaron huffed as we dragged the bucks to the beach to gut. “You win,” said the owner of the Barnacle Buck. “Your bucks had a total of four antlers. Mine…only three.”

I protested then, just as I protested three months later at the SHOT Show, from behind the most well-earned mustache you’ve ever seen.