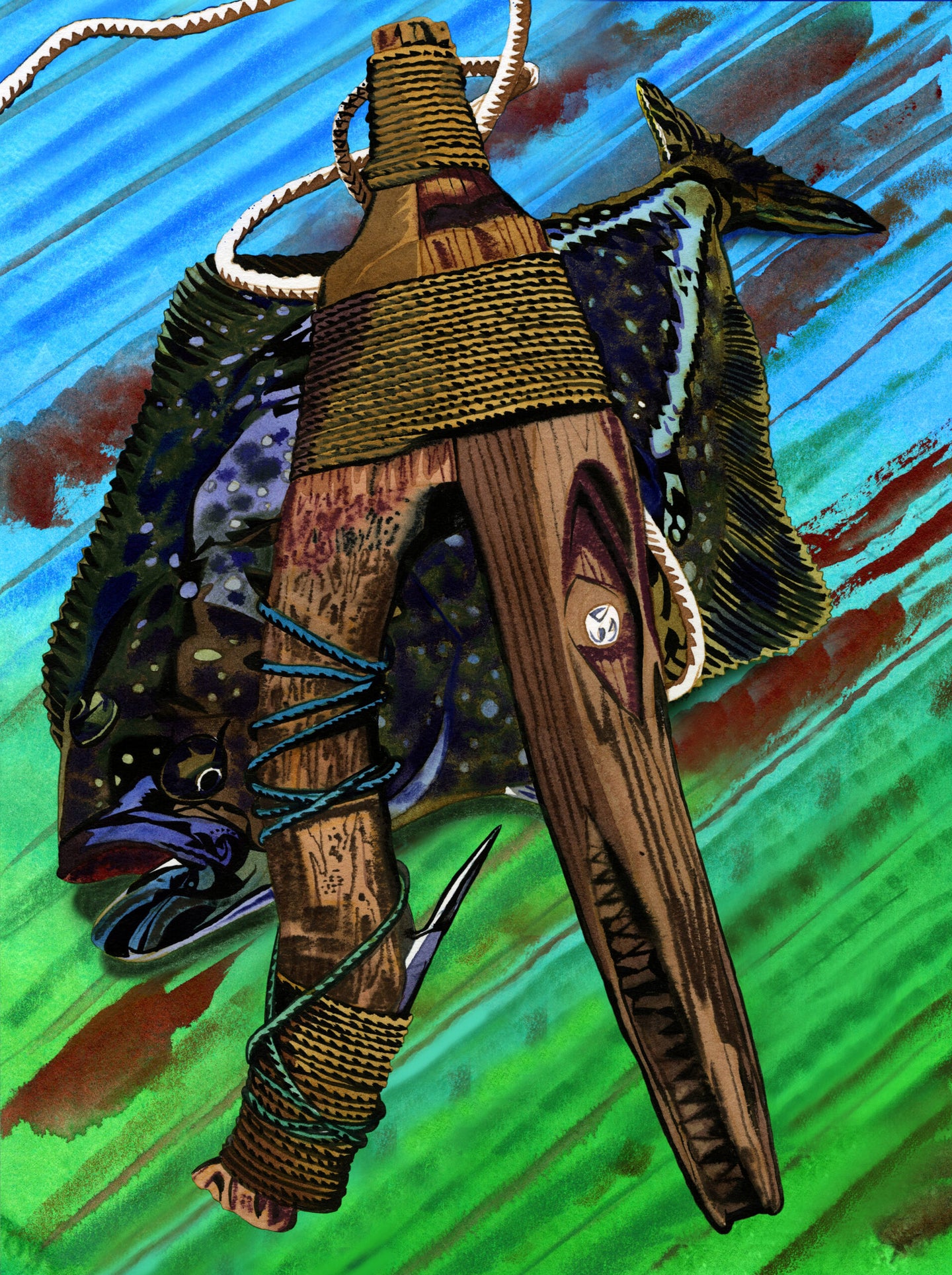 Tlingit people have been using wood hooks for centuries, a skill passed down through the generations. Jeffery Smith

MY TLINGIT NAME IS KOOTINK. I was born in Ketchikan and raised just west of there on Prince of Wales Island, in Craig, a town of about 1,000, where my people have thrived since time immemorial. But I haven’t always lived there.

When I went to college, it was in Santa Barbara, and on my first day in California, I went to the grocery store to buy chicken, and that—the act of buying meat in a store—was a culture shock. From the time we were little, all the kids I knew ate food that our families had harvested. We all teethed on dried fish.

The kids in my college classes noticed my black hair and asked, “Where are you from?” I guess I didn’t exactly fit the stereotype of a Southern California girl.

I lived for a few years in Florida—another coastal state that wasn’t home. Eventually I was drawn back to Alaska by my connection to the people and the culture and the land. I love seeing the rock fish traps Tlingit people used to catch fish hundreds of years ago. I love walking through old-growth cedars with pull marks where bark was harvested for weaving and hearing stories about the camps where our people would go each harvest season.

It wasn’t until I moved back home that I killed my first deer, when I was 28 years old. I had asked my dad a couple of times to take me hunting, but he didn’t have much of an answer. Still, I kept after him.

Then one day he announced, “All right, let’s get ready.” He pulled a pre-’64 Winchester rechambered in .222 Remington from the cabinet and gave it to me. Even though my dad didn’t say much, this gesture said a lot.

We walked through the woods for a while until he stopped to call. It was November and the heart of the rut, when blacktail bucks charge in to doe bleats—maybe he waited to take me hunting until the best part of the season?

Sure enough, a small buck came to his call, and I shot him carefully behind the ear, just as my dad had instructed.

When we harvest a deer, we pack it out of the woods whole by intertwining the hind legs with the forelegs in a “Tlingit backpack.” We use all of the neck and spine to make deer-bone soup. We boil and fry the stomach. I make jewelry from the antlers, and the cape is tanned and turned into moccasins, hats, and mittens.

My great-grandma was a skin sewer, and I can feel her with me when I create these things. I was taught to always create when my heart and mind are in a good place, so that whoever wears the items will receive that energy.

The land and water give us life, food, shelter, and protection, and, in return, the land and water deserve our respect. I’m hopeful that our Tlingit culture of subsistence will survive another 10,000 years. If it does, it will be partly because more people can learn about our traditions thanks to technology. A lot of non-Native people and people who don’t live here seem to be interested in how we put up traditional foods and in the stories behind it all.

But also, I think people my age, in their mid-30s and younger, even, feel a sense of obligation to our ancestors to pass on our traditions and our stories. Those threads of tradition and culture will unravel if we don’t hold them close.

Alaska was still a territory when my dad was growing up. My grandma’s generation was taught that our Tlingit culture was bad, an obstacle to assimilation. In those days, our people were sent away to boarding schools and had a religion that wasn’t their own forced upon them. A lot of trauma has been passed down. The knowledge that my father’s generation has about our culture is influenced by that trauma.

As the years pass, fewer Tlingit are 100 percent Native. Some aren’t 50 percent Native, or even 25 percent. There’s a belief among some Tlingit that these people are “not Native enough” to carry on our culture.

But Indigenous is Indigenous. Those blood quantum rules were originally designed to get rid of us, and I hope that we’re moving away from that way of thinking. We’re all here now. And every one of us is part of that history.

Read Next: Q&A with a Tribal Hunter on Storytelling, Taking Photos of Game, and Hunting Traditions

My generation loves our culture. We’re doing the best we can, because this is the life we want to live. But we don’t know everything.

We do know, however, that the most important thing we can do is listen to our elders, learn about the old ways, and put those lessons to use. A few people here are older than 90. Our elders tie us to Tlingit traditions and culture. They’re our storytellers. They are our history. In some ways, that makes them our future.

About the illustration: Tlingit people have been using wood hooks for centuries. They’re made from yew (the carved side) and yellow ­cedar (the barbed side). The wood creates the right buoyancy as they float off the bottom of the ocean, luring halibut. Each hook has a spirit and is carved with eyes so it can see what it’s catching. When we set the hooks out, we tell them to “catch fish” or “charge!” in Tlingit. They’re designed to hook fish that are the perfect size for eating. When my dad was young, he learned to make the hooks from Grandpa Ralph, an elder from Craig. And now he’s taught me how to fish with the hooks. They’re a symbol of artistic and ecological relevance. They embody the ingenuity of Alaska Native people and our ability to maintain a subsistence lifestyle for more than a thousand years—and for thousands of years to come.