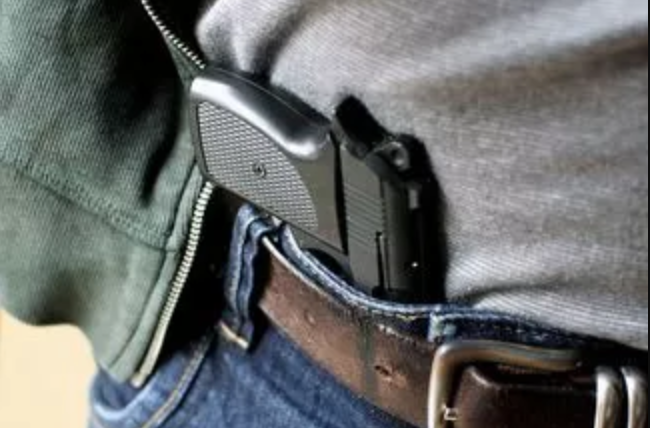 HR 38, The Concealed Carry Reciprocity Act of 2017, passed the House on Dec. 6 in a 231-198 vote. But Senate Democrats, now 49 strong following the calamity that was Righteous Roy Moore’s defeat-from-the-jaws-of-victory loss in red state Alabama, say the Senate’s version — SB 446, The Constitutional Concealed Carry Reciprocity Act of 2017 — is a nonstarter because it weakens state and local laws, and because House Republicans engaged in skullduggery by combining reciprocity with SB 2135, The Fix NCIS Act, to induce fence-sitters to approve one with the other.

The House reciprocity bill that was passed in early December was the sixth version introduced since 2007. Sponsored in January by Rep. Richard Hudson (R-NC) it has 213 co-sponsors and endorsements from 24 state attorneys general.

But the Senate version, sponsored by Sen. John Cornyn (R-Texas) in February with 39 co-sponsors, remains in the Senate Judiciary Committee and may never be presented for a vote as Democrats, and some Republicans, challenge supporters’ claims that national reciprocity would clarify confusion in negotiating the state-by-state matrix of concealed carry laws.

The bill seeks to administer concealed carry permits like driver’s licenses, making a permit from one state valid in the other 49. Under the bill, permit-holders are still subject to any state or local laws that restrict carrying a gun in a school or a designated zone around it. Governments and private entities could continue to ban firearms on their property.

The bill reads: “This section shall not be construed to supersede or limit the laws of any state that permit private persons or entities to prohibit or restrict the possession of concealed firearms on their property, or prohibit or restrict the possession of firearms on any state or local government property, installation, building, base, or park.”

But, opponents correctly note that there are scenarios that HR 38 does not clearly address. For instance, if H.R. 38 became law and California was forced to honor out-of-state permits, residents who had been turned down for concealed-carry permits in California — a “may” issue state that stipulates permit applicants justify their need to carry a concealed weapon — could apply for a permit in neighboring Arizona, which does not require applicants to be Arizona residents, and be legally permitted to carry in California after all.

Of course, the Supreme Court could clear all this up with a ruling in Peruta v. California but has apparently opted to avoid reviewing any Second Amendment-related cases.

There are 16.3 million concealed-carry permit holders nationwide, according to the Crime Prevention Research Center. Sixteen million, three hundred thousand divided by 49 equals 332,853 phone calls to each Democrat Senator. All you have to do is make one.

In May 2017, Facebook hired 3,000 additional employees to review content and activities reported by users — not regarding gun sales — to bolster its Community Operations Team to 7,500 employees.

Facebook allegedly relies on users to report violations of its policies. The social media giant allegedly doesn’t actively monitor groups. But, fear not, Moms Demand Action is doing just that.

According to Moms, a significant number of these transactions were conducted on social media sites, particularly within Facebook member-only groups. Group administrators can switch privacy settings to “secret” and make the group invisible to those not invited into it and, therefore, elude detection.

According to a Dec. 11 article by Max Fillion in The Columbia Missourian, in mid-December there were at least six groups — with a total membership of approximately 2,600 — of Missouri residents alone that privately buy, sell, trade and barter firearms and ammunition As private transactions, no background checks are required by law.

The sites have a whack-a-mole existence — and now face exposure by spies and interlopers from Moms and other groups. They could also, in some certain circumstances, face criminal charges.

Fillion writes that it is a cultural tradition for Missourians to engage in private gun transactions that often involve bartering and trades.

“This is trading country. No one has the cash sitting around to be buying whatever,” Tim Smith, a member of a group Facebook deleted, told Fillion. “Say I have a car that’s worth $10,000 and I can’t get rid of it. No one has $10,000 sitting around to buy that. Maybe somebody finds that car on a sale site and says ‘Hey, I’ve got 10 guns.’ If their value is equal to, or more than, my car, it could be a good deal. You can sell off the guns until you get your money back. Or, you could keep them.”

Many told Fillion that conducting background checks is time-consuming, costly and inconvenient.

“People don’t have time and money to waste to do something when they’re not doing anything wrong,” Smith, a Marine Corps veteran, told Fillion. “We’re just hillbillies trying to build or sell a car or make the next electric payment.”

In Missouri, as in 26 other states, NICS background checks are only required when purchasing a gun from a Federal Firearms Licensee (FFL). Since it is not a legal requirement for private transactions between individuals, there is no incentive to pay $30 for a NICS background check or to go through the hassle of filling out and filing the forms in person, as required.

Many Missourians also distrust what the federal government does with information in an NICS background check. Russell Reel, who was selling his Browning Buck Mark .22 on his iPhone 7’s Facebook app, told Fillion that prospective buyers often scoff at the mention of a background check.

“They think the government’s going to show up at their house one day with a clipboard saying, ‘You’ve got 12 guns and we need them,’” Reel told Fillion.

One way to avoid Facebook censors and Moms’ snoops, while engaging in perfectly legal activities, would be to download a smartphone app called The Shooting Club specifically created to connect gun-owners. Lauded as the “Facebook for gun-owners,” it launched in August 2016 and, according to Forbes, garnered more than 10,000 users during its first 90 days.

— Why is Lloyd’s of London insuring American guns?

Florida Bill Would Create Process For Felons To Have Voting, Gun Rights Restored

Florida is one of four states that do not provide a process to allow some convicted felons to apply for restoration of some rights, including the right to vote and the right to legally possess a firearm. If you’ve done the time for your crime in Florida, tough luck, you are still F-L-A outta luck in ever elevating your status as a citizen in good standing.

Rep. Cord Byrd (R-Neptune Beach) on Dec. 6 prefiled HB 903, The Economic Redemption and Restoration of Constitutional Rights Act, that would establish a process to allow felons who have served their time and paid any related fines to make cases for having their rights to be restored.

There are more than 1.6 million felons in Florida, the highest total nationwide, according to ProCon.org. Under the proposed bill, felons would be able to petition circuit and county judges once a year to restore some or all their rights. Prosecutors could challenge those efforts, with the opportunity to present witnesses and evidence supporting their case.

Byrd, whose calls himself “The Florida Gun Lawyer” on his Facebook page, is a first-year lawmaker. Right now, he said, there is only one state venue to request restoration of rights, the Office of Executive Clemency, which is a four-member panel led by Gov. Rick Scott. The average wait for a hearing is nine years, he said.

“Over 22,000 applications are pending, with only a few hundred being processed each year,” Byrd wrote in the proposed bill. “Clearly the system is broken.”

— Bill would give Florida felons second chance at owning guns

— Arkansas: Language in new Enhanced Carry Law could cause delay for some gun owners

— New gun restrictions are coming to California in 2018. Here’s what they mean to you

— Tribune Editorial: Utah should not tell other states what their gun laws are

— Missouri Legislature to be asked to ban controversial gun accessories

— Will Medical Marijuana Users in Ohio Be Allowed to Own Firearms? Federal Law Still Says No

The Massachusetts Supreme Judicial Court on Dec. 5th reviewed a 2015 ruling that upheld a state ban on personal ownership of stun guns.

In 2016, the U.S. Supreme Court ordered the Massachusetts Court to reexamine its ruling in Commonwealth v. Jorge Ramirez. In presenting their case on Dec. 5th, Jorge Ramirez’s attorneys told the Court that the ban violates the Second Amendment right to keep and bear arms.

Ramirez, who continues to face charges in Chelsea District Court, is appealing the ruling. Both the prosecution and his defense have asked for a definitive ruling from the court, maintaining that the stun gun ban law “is under a “cloud” because of the U.S. Supreme Court ruling.

According to The Boston Globe, the Suffolk District Daniel F. Conley’s office says the Supreme Court didn’t declare the state law unconstitutional, but held that “the articulation of the reasoning behind this Court’s decision upholding the statute was incorrect in light” of Supreme Court Second Amendment rulings.

Prosecutors continued to maintain during the hearing that stun guns are “dangerous and unusual” weapons that fall outside the protection of the Second Amendment, so they can be banned.

A ruling is expected sometime in early 2018.

— Massachusetts: State’s high court could rule on stun guns for personal use