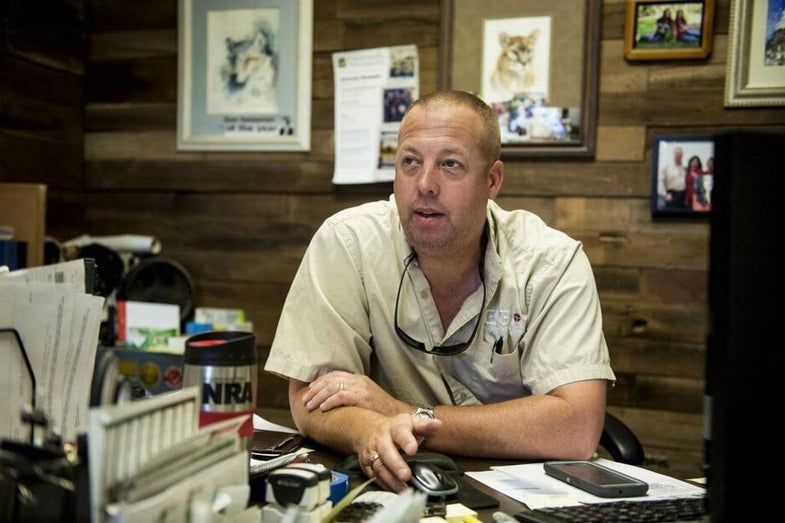 The long-awaited Supreme Court review of a California law that requires a citizen to seek permission before exercising a fundamental individual right is not going to happen this year — if ever. On June 26, the court again denied to accept Peruta v. California for its 2017 session, which begins in October.

Over the dissents of Justices Clarence Thomas and the newly-appointed Neil Gorsuch, the court rejected an appeal of the 9th Circuit Court’s ruling that upheld California’s “shall issue” law, which requires private citizens to present a reason to local law enforcement officials why they want to obtain a concealed carry permit. Based on that reason, the law enforcement agency—usually a sheriff’s office or police department—“shall issue” or “shall not issue” the license.

California is one of eight “shall issue” states that allow local governments to deny concealed weapons permits based on what reasons applicants offer. The other 42 states are “may issue,” meaning if applicants meet the criteria, they are issued the permit without having to state a reason for doing so.

Justices reviewed Peruta in private conference on June 15th and issued their decision on June 26. It was the 11th time, including four reschedulings, that the case has been on the justices conference agenda to review since the attorney Paul Clement, of Kirkland & Ellis, Washington, D.C., filed a petition for Writ of Certiorari—in layman’s terms, review—on Jan. 12, on behalf of Edward Peruta, Michelle Laxson, James Dodd, Dr. Leslie Buncher, Mark Cleary and the California Rifle & Pistol Association Foundation.

Peruta has been working its way through the courts since 2014 when a three-judge panel of the 9th Circuit Court sided with “shall” proponents. In June 2016, an en banc panel overturned the 2014 ruling in a 7-4 decision that determined “there is no Second Amendment right for members of the general public to carry concealed firearms in public.”

On Aug. 15, 2016, the 9th Circuit rejected a petition to review its June determination, prompting the request for review by the U.S. Supreme Court.

Many media outlets and even Second Amendment advocates misconstrue the case as a challenge to prohibitions against carrying firearms in public. That is a component of the appeal, but the Supreme Court’s 2008 Heller ruling determined it is a fundamental individual right under the Second Amendment for a non-exempt citizen to own a personal firearm for whatever reason he or she wants. Therefore, the correct way to interpret Peruta v. California is a challenge to a state-imposed preemption of a fundamental individual right.

Which is why Thomas said the ruling, which is now final, treats the Constitutional right to bear arms as “a disfavored right,” either dangerously separating it from the other 26 amendments or, in fact, endangering them all. After all, under Constitutional law, if a government can require a citizen to seek permission before exercising one right granted by the Constitution, it can do so for them all.

This case was not exclusively about gun rights, nor was it simply about the right to carry a firearm in public. It was about the integrity of fundamental individual rights granted by the Constitution.

NO PAYPAL OF OURS

A California gun shop owner has filed class-action lawsuits against PayPal, Stripe, and Square for denying online money transfer services to his business in violation of a state law that protects federally-licensed gun stores from discrimination.

Blair Gladwin, owner of Gladwin Guns and Ammo in Merced, filed his suits in Merced County Superior Court against the three money transfer services after they required him to disclose what his business sells and then terminated his account.

The companies claim they have policies against transferring money for the sale of guns, ammunition or other gun-related products. Gladwin and his attorneys claim their policies violate state law by discriminating against him and his business.

According to Thaddeus Miller of The Merced Sun-Star, Gladwin has operated his gun shop outside Merced since 2000. He sells handguns, rifles, and accessories that are all legal in the state. The shop is his only source of income.

Like many retailers, Gladwin has expanded his sales to online retailers. Without an online money transfer service, he said, his sales take a hit because buyers don’t want to have to get a cashier’s check.

“They basically flat out shut me down,” he told Miller. “My livelihood is on the line, because my revenue is going to drop.”

California’s Unruh Civil Rights Act protects federally-licensed gun stores, according to William McGrane, Gladwin’s attorney. “It’s against the law in California to discriminate against people based on occupation,” he told Miller. “Refusing somebody you don’t want to serve is itself illegal.”

“Essentially, it’s political correctness,” McGrane continued. “Indeed, they do have a desire to regulate something that the government is not allowed to regulate.”

Gladwin’s lawsuits were filed in Merced County Superior Court, asking the court to mandate services to gun dealers and award no less than $5 million per company, as well as attorney fees.

In a letter to Outdoor Life, Gladwin’s representatives elaborated on their case, noting he believes this is a violation of California’s Unruh Civil Rights Act Sections 51, 52(a) and 52(c), which protects federally-licensed gun stores from discrimination. Gladwin’s three class-action suits were on behalf of himself and all federal firearms dealers during the class period who: 1.) learned of the requirement to disclose the nature of their business and were then deterred from opening a payment account, or 2.) had an account terminated by a payment processor because of the nature of their business.

The letter states that Gladwin is asking the court for a public injunction mandating that the payment companies cease violating the Unruh Act (thus allowing the firearms dealers to use the payment processors to facilitate buying and selling firearms), a total award to class members of no less than $5 million (per company/class-action lawsuit), and attorney fees.

According to the letter, “This case raises an important issue about whether payment processing companies can refuse service to legal (but sometimes controversial) businesses.

McGrane’s statement in the letter reads: “The very large non-bank defendants in these cases are allowing their private sense of political correctness to extend so far as to ban even persons who hold valid federal firearms licenses from accepting Electronic Funds Transfers, all in defiance of the Second Amendment to the federal Constitution and the California Unruh Civil Rights Act of 1978. The net effect of what they are doing is making the legitimate business of selling firearms operate as a cash business only, all in a misguided effort to effectively ban the sale of firearms and related products from the marketplace.”

— PayPal is discriminating against me because I sell guns, Merced businessman says

— Gun Sales Are Plummeting and Trump Wants to Help

University of Kansas third-year football coach David Beaty says he will not allow any of his players to exercise their constitutional right to carry a personal firearm should they chose, even though the state legislature’s Constitutional Carry law allows campus carry.

The Personal and Family Protection Act became the law of the land in Kansas on July 1. But Beaty told Dennis Dodd of cbssports.com none of that matters to him.

“I will be very adamant about … banning (guns). I don’t want weapons around for our team. I know it’s a bad, bad deal for us,” he said. “I understand the politics involved in it. I get that. But we’re talking about kids with lives and kids getting pissed with each other and kids that are highly competitive with each other. I fear what it could blow into.”

Beaty goes on to say that some of “our kids are still 16-, 17-, 18-years-old. A lot of them don’t know anything about firearms. Just because you can [carry one] doesn’t mean you should.”

While 16 is a little young to be in college, never mind playing football for the Jayhawks, Beaty fails to note that the Kansas law requires concealed carriers to be at least 21-years-old.

The Kansas law allows concealed carry on more than 40 colleges and universities in the state, including Wichita State and Kansas State.

“It’s a little scary,” Kansas State athletic director Gene Taylor told Dodd. Meanwhile, Garden City Community College coach Jeff Sims seemed to acknowledge that even football players have Constitutional rights and Constitutional rights extent to the gridiron. ”You kind of gotta roll with society,” Sims told Dodd. “That’s what our society has decided their law is, and you just adjust.”

— Study reveals Louisiana has the highest homicide rate by gun

“If this injunction does not issue, hundreds of thousands—if not millions—of otherwise law-abiding citizens will have an untenable choice: become an outlaw or dispossess one’s self of lawfully acquired property,” Benitez wrote in a statement published by the Associated Press. “That is a choice they should not have to make.”

The NRA and its state affiliate have filed lawsuits seeking to make the injunction permanent. “My clients are pleased the Court affirmed that the Second Amendment is not a second class right, and that law abiding gun owners have a right to choose to have these magazines to help them defend themselves and their families,” said Chuck Michel, a Long Beach attorney who represents the the California Rifle and Pistol Association, the NRA’s state affiliate.

In 2000, California banned the sale of large-capacity magazines, but those who owned the devices were allowed to keep them. That changed in November when 63 percent of California voters approved Proposition 63, which bans the possession of magazines capable of holding more than 10 rounds of ammunition.

Sean Brady, an attorney for gun owners in the lawsuit, told Patrick McGreevy of the Los Angeles Times that “tens of thousands” of Californians still have large-capacity magazines.

The law says that options for owners of the magazines include transferring them to a federally licensed gun dealer, destroying them or turning them over to law enforcement. If the injunction had not been issued, anyone in possession of a banned magazine starting July 1 would have faced a citation punishable by a fine not to exceed $100 per magazine, or could have been found guilty of a misdemeanor punishable by a fine not to exceed $100 and up to a year in jail.

Few people who own the outlawed magazines have turned them in to police. Officials expect many will hang on to them until courts decide the pending challenges to the law on the merits.

“Until this is litigated, I think some will hold onto their magazines,” Kern County Sheriff Donny Youngblood told McGreevy. “Others who are concerned about ramifications might sell them in another state.”

No magazines have been turned into the Kern County Sheriff’s Office in the last three months, he told McGreevy.