Plus: Kamala Harris, Remember the Name 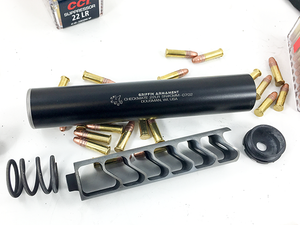 Kamala Harris: Remember the name because you are going to be hearing it often in the coming years. California’s former Attorney General and newly-elected U.S. Senator, Harris is being elevated in some corners as a potential contender for the Democratic Party’s 2020 Presidential nomination.

So, it’s no surprise that she’s checking all the boxes on the left-side of the ledger to build her DNC bid credentials. In this respect, it’s a mild surprise that she waited more than seven months before checking off her support for Big Government gun control on the national stage.

But hey, when she did so in early August, Harris went big, joining her fellow California U.S. Senator, the rabidly anti-Constitution Diane Feinstein, in calling for a reinstatement of the Feinstein-sponsored federal “assault weapon” ban.

“It’s long past time we renew the assault weapons ban in this country. It is in the best interest of keeping all of us safe,” Harris Tweeted.

Since the federal “assault weapons” ban expired in 2004, seven states have passed their own blanket prohibitions against select scary-looking semi-autos in the guise of “doing something” about “gun violence” — blatantly superficial measures that purposely avoid addressing the underlying criminal and mental health causes of “gun violence” by appealing to the emotional hysterics of a TV-educated constituency that “believes” and “feels” such dog-and-pony show symbology is substance.

Harris has been a practitioner of such deceit for more than a quarter century in California. In 2003, after serving as Alameda County deputy district attorney, she was elected San Francisco District Attorney. In this capacity, she was among DAs and other attorneys who filed briefs to the U.S. Supreme Court in defense of Washington DC’s gun ban in the landmark 2008 Heller case. Harris maintained that banning personal ownership of a firearm somehow, someway, did not violate the Second Amendment.

As Chris Eger writes in an August 14 Guns.com article, “A hallmark of her administration was introducing new firearms rules on bullet buttons, semi-auto handguns, and assault weapons under ‘emergency’ regulations which could be rushed into effect.”

While Harris has not introduced any legislation related to firearms since joining the Senate, stay tuned: She’s got boxes to check-off in establishing her “cred” to be a viable Democratic candidate for President in 2020.

— Senator: ‘long past time’ to bring back ‘assault weapon’ ban

— With a Friend in the White House, the NRA Scrambles to Find Other Targets

Among bills awaiting movement after Congress returns from summer recess on Sept. 5 is HR 367, The Hearing Protection Act of 2017. Introduced by Rep. Jeff Duncan in January, the bill has 159 co-sponsors and has been idling in the House Ways and Means, and Judiciary, committees since February.

The bill seeks to lift restrictions placed on suppressors by the National Firearms Act of 1934, which requires a lengthy background check process for suppressors, including a $200 tax and individual approval through the Bureau of Alcohol, Tobacco, Firearms and Explosives.

If adopted, the bill would also amend the Gun Control Act of 1968, which treats suppressors the same as handguns and mandates dealers fill out ATF’s Form 4473, the standard background check application used for gun transfers nationwide and recorded in the National Instant Criminal Background Check System.

As gun owners know, suppressors do not conceal the sound of firearms being discharged, only mute the sound to a point where hearing damage is limited. As gun owners understand, there are often hunters in the field wearing ear plugs and other gear to protect their hearing that, conversely, can lead to potentially hazardous situations because protecting one’s hearing often means diminishing one’s capacity to hear what is happening around them.

So, while the bill addresses a safety hazard long cited by gun owners and hunters as a needless danger, the Violence Policy Center, a Washington, D.C.-based gun control fantasy weavers, has determined suppressors that allow gun owners and hunters to hear more clearly what is going on around them is actually a threat to public safety.

Of course, it’s all a lie. What the Violence Policy Center (VPC) wants rank-and-file people who may not be familiar with actual firearms to “believe” and “feel” is suppressors are actually “silencers” that would enable bad, bad gun owners to go around shooting people without anyone hearing a sound.

You know, Dick Tracy, James Bond, silencers … according to the VPC, the bill will allow anyone with a gun to shoot people at will without a sound with their newly purchased silencers.

According to the VPC, the benefits of suppressors that soften the ear-blasting reverb of gun shot — improved accuracy, reduced recoil, among others — somehow, someway will endanger law enforcement and first responders.

“These ‘benefits’ could help enable mass shooters and other murderers to kill a greater number of victims more efficiently,” the VPC study maintains without citing any real facts to think about while offering, instead, “beliefs” and “feelings.”

American Suppressor Association President and Executive Director Knox Williams was among many firearms manufacturers to dismiss the VPC’s claims with actual facts in the hope that people will actually know the facts and think about them rather than “believe” and “feel.”

“This still doesn’t take into account the fact that even with a suppressor, guns are still incredibly loud – as loud or louder than a jackhammer striking cement,” Williams told Guns.com. “I wonder if they think people in crowded cities have a hard time hearing jackhammers too?”

Suppressors (real) vs. Silencers (fake). It’s all about knowing the facts that thinking about them rather than believing and feeling what you want.

— Sturm, Ruger Shoots Itself in the Foot

Oregon Gov. Kate Brown on August 16 formally signed into law legislation to establish Extreme Risk Protection Orders, which will require those determined to be “an imminent risk to themselves or others” to surrender their firearms.

The law, SB 719A, allows police, or a member of a subject’s family or household, to file a petition with the court which could lead to an order prohibiting firearms possession if they believe the person presents a danger to themselves or others. The bill passed the Senate 17-11 in May and the House 31-28 last month, picking up only one Republican supporter along the way.

Brown called Extreme Risk Protection Orders the “best way to ensure that a person who is at risk of harming themselves or others is identified, while still ensuring their rights are protected by a court review.”

The law establishes a process to obtain an order issued by a judge in a civil court prohibiting the subject from possessing or buying firearms or ammo for one year. It grants police enforcing such orders the power to search for and seize guns that were not surrendered or stored with a third party such as a gun dealer. The subject of the order has 30 days to request a hearing to keep their firearms, which must be held within 21 days.

Those filing fake orders could be imprisoned for up to a year, or pay a fine of up to $6,250, or both.

The law was modeled on one adopted after a ballot referendum last fall in neighboring Washington following a $3.5 million push by gun control groups, which in turn was based on a 2014 California law.

The bill is among a slew of legislation proposed in state legislatures addressing mental health and domestic violence “holds” on firearms possession. According to Congressional Quarterly, at least 23 states have imposed laws limiting access to firearms for domestic abusers since 2013 — including six new laws in 2017 signed into law by Republican governors. Adopted bills include:

— Where can you carry a gun in Michigan? It’s complicated. (How much? Take our quiz)

A Montana man on August 14 filed a lawsuit in the United States District Court for the District of Columbia challenging the federal prohibition against non-violent felons legally owning a firearm.

Gregory L. Reyes, who was convicted of securities fraud in 2010, argues that the crimes for which he was convicted do not qualify under federal law as offenses to which a firearms restriction should apply. Under Montana law, he maintains in the suit, he could legally own a firearm.

According to his complaint, “Plaintiff challenges the complete denial under Section 922 of Title 18 of the U.S. Code of Plaintiff’s Second Amendment right to keep and bear arms solely and exclusively on account of his 2010 convictions for federal securities and accounting offenses. Section 922(g)(1) prohibits firearm possession by ‘any person . . . who has been convicted in any court of, a crime punishable by imprisonment for a term exceeding one year.’”