An iconic autoloader gets a tactical makeover 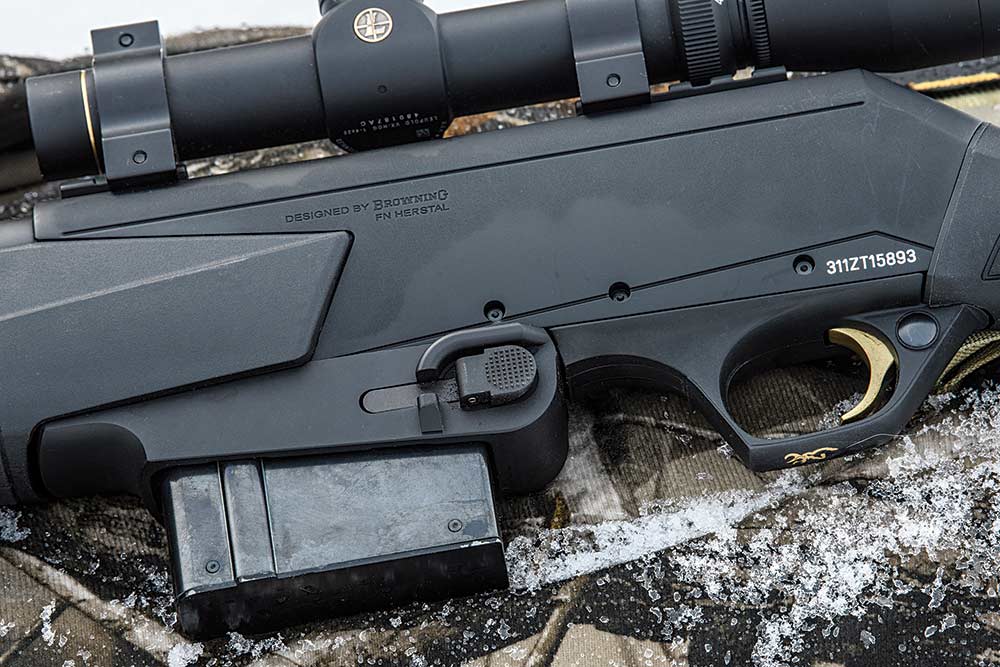 Browning might not make ARs, but the company has a history with autoloading rifles that dates to the earliest days of the 20th century, long before the first AR was conceived. Given Browning’s seniority in this arena, the latest iteration of the iconic BAR is sort of a finger in the chest of AR makers to remind them who came first.

The original Browning BAR was the M1918, a fully automatic light machine gun in .30/06 that was developed during World War I for trench warfare but didn’t see extensive use by the U.S. military until World War II. It also served in Korea and Vietnam before being phased out.

In 1967, Browning introduced the next BAR, a semi-automatic sporting rifle for hunters—and that rifle is the direct forefather of this new BAR MK 3 DBM. The 1967 BAR was gas-operated, had a seven-lug rotating bolt head, a removable box magazine that was attached to—and concealed by—a trap-door-type hinged floor plate, and a light and handy geometry that allowed it to be pointed and shot fast. As a rifle for thick timber and brush, it had few equals, especially since it was offered in several magnum calibers, like 7mm Rem Mag., .300 Win. Mag., and .338 Win Mag. in addition to standard long- and short-action cartridges.

The MK 3 DBM shares many of the qualities of the original sporting BARs and the BAR Mk II series that followed. But in this era of all things tactical, Browning has decided to give the MK 3 DBM a harder look.

The DBM has a high-capacity detachable box magazine (hence, DBM) that fits into the magazine well and doesn’t attach to a floor plate. The steel magazine is a solid piece of work and takes 10 rounds of .308. The rifle has magazine releases on both sides of the bottom metal for ambidextrous operation.

The rifle’s barrel is 18 inches long with a 1:12-inch twist. That short barrel makes this BAR especially compact and handy. Combined with its magazine capacity, it was a natural choice for a cross-country boar hunt that OL editor-in-chief Andrew McKean embarked on last year. He topped the rifle with a 1–4X Leupold scope with a Pig Plex reticle and came away from the hunt impressed with the rig.

“It handled almost like a shotgun, pointing pretty instinctively,” McKean says. “For me, it’s a great alternative to an AR. I think it has better weight and balance than an AR, and I’m able to deploy it faster, probably because its lines and operation are so familiar to me as a shotgunner.”

McKean’s longest shot was 220 yards across a wide pasture. Based on both his and my experience with the gun, that’s probably a reasonable limit for the gun’s hunting range.

Per Outdoor Life‘s standard testing protocol, I put a variety of hunting and target loads through the rifle, recording five-shot groups at 100 yards. Since the 1–4X scope is such an ideal optic for the rifle—though you can make a pretty good case for a red-dot sight, too—I left it on for the accuracy testing. Group sizes were consistently around 2 inches, no matter the bullet style or weight. Had I mounted a high-magnification scope on it, it probably would have turned in better accuracy scores, but these results reflect the real-world capabilities of the rifle in the field.

One drill the BAR excelled at was making quick shots on steel plates at 100 yards from a low-ready carry position. The shotgun-like pointing qualities McKean talked about are evident with this exercise.

It also does a bang-up job with quick follow-up shots. The rifle’s recoil impulse is very gentle, and it is easy to keep the crosshairs on target. The crossbolt safety at the rear of the trigger guard is not the most ergonomic position for a safety, but right-handed shooters can manipulate it fairly quickly.

From an aesthetic standpoint, the black synthetic stock won’t win any beauty contests, but I give it high marks for its trim lines and overmolded grip panels. I also think the QD flush cups for mounting a sling—one at the tip of the forend, the other on the bottom of the buttstock—are a smart feature. In terms of the stock’s functionality, I wouldn’t change a thing.

The BAR’s trigger has a shotgun-like quality to it, meaning it is a bit creepy, though it broke at a perfectly reasonable 3 ½ pounds. The trigger group can be removed from the rifle for cleaning by drifting out the three retaining pins found along the bottom of the aluminum receiver. To gain access to the action bars, gas piston, and recoil spring assembly, you have to unscrew both the hex-head fastener located in the front QD flush cup, and the front swivel stud, which—other than holding the forend on—doesn’t really perform a useful role on this rifle unless you plan to mount a bipod, which would be an odd addition to this carbine. Since there’s no easy way to clean the BAR’s barrel from the breech end, you’re going to want to use a muzzle protector before running a cleaning rod down the bore.

If your heart is set on getting a semi-auto hunting rifle for any type of close-in game, but you find the bulk of AR-10s a turnoff, the BAR is a rifle worth considering. The big-game hunting rifle that ARs strive to be is something the BAR accomplished long ago.

The carbine is perhaps the most versatile personal defense firearm you can own. Handguns are easy to carry, but they are not the best choice in a serious fight. Shotguns are limited in range and capacity, but a carbine does it all.

The 2x2x2 drill is designed to build speed and accuracy when engaging multiple targets with a carbine. It’s a Viking Tactics drill developed by Kyle Lamb, who is one of the top trainers in the world today.

In the setup, there are three side-by-side, evenly spaced targets 5 yards in front of the shooter. You start with the rifle butt on the shoulder and the muzzle down in the low ready position. At the buzzer, you engage each target in order, with two shots each, going either right to left or left to right—shooter’s choice.

You must be fast and accurate and not just throw three erratic and panicked double-taps. The key to speed is to do it smoothly. Concentrate on making the hits—the speed will come later. This drill’s focus is on building the skills that enable you to shoot and drive the gun with fluid timing. Think of this drill as one entity. If you focus on the individual shots, you will be too slow. Just as with a move in martial arts, if you have to think about it, it’s too late. Or the way a part of the brain makes you pull your hand from a hot stove. You don’t think, “Wow, this is hot. I should move my hand from the stove.” It just happens.

To shoot this drill well, you need to harness that part of your brain. This is somewhat like shotgun shooting, where you turn off the thinking part of your brain and let your subconscious run the gun. You must find the “zone” that athletes, martial artists, and musicians talk about.

You need to drive the rifle with precision and a fluid motion, and the shot must be breaking as the sight comes into the hit zone. If you wait to see the sight on the target, you’ll be too slow. Drive the gun, prep the shot, and break it as the sight aligns with the expected impact area. This requires that you control multiple directions of movement: lateral motion from target to target, and vertical movement of the muzzle from recoil.

As with any CQB rifle drill, it’s best to use a non-­magnified optic such as a red dot or holographic sight. A true 1X scope with an illuminated, daylight-visible dot is also a good choice. You want to shoot with both eyes open to give you a full range of vision to aid the transition from target to target.

The key is to fire two “controlled pairs” at each target. This is where each shot is aimed and you must see the sight’s reticle on the target before breaking the next shot. You must also drive the gun fast from target to target, but stop the reticle on target to break the shots; do not try to shoot as the gun swings past the target. The cadence should be so that the splits between the shots will be just about equal to the splits between targets. The result is six evenly spaced shots that can be checked by looking at the split times on a timer.

Only center hits count—any shots outside of the C zone on a USPSA or the -1 zone of an IDPA target do not count. As you become better at the drill, tighten up the scoring requirements to the A zone on a USPSA target and the -0 zone on an IDPA target. Remember, the goals are accuracy and speed—in that order.

Anyone who has some shooting experience will shoot the drill in about 2.0 to 2.5 seconds the first time through. With practice, 1.5 seconds is a viable goal. When you can keep all the shots on the A zone in a USPSA target and do it in 1.5 seconds or less, you have mastered the drill. But there is always room for improvement. My best is 1.3 seconds. Kyle Lamb does it in 1.26 seconds on video. Learn to beat that time, every time, and then you can strut.