A hard-working .308 with a battlefield pedigree 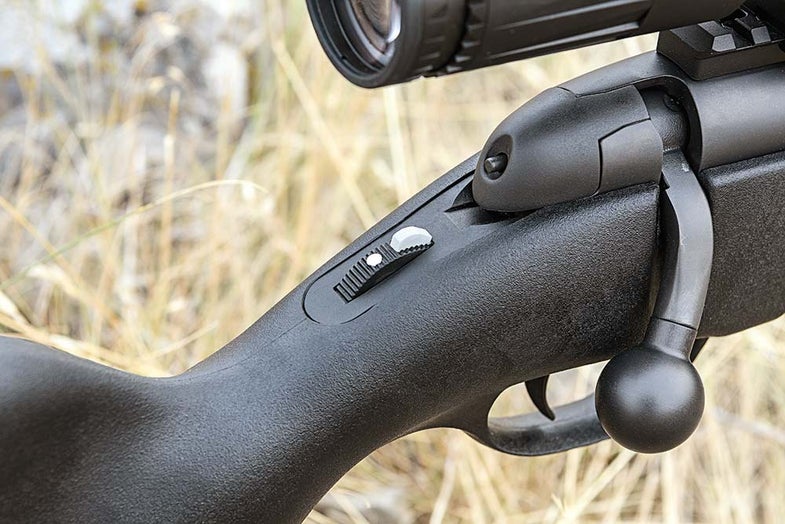 Notable Feature:
The three-position wheel safety is quick and intuitive to use. As pictured, the gun is on safe and the bolt is locked down. An intermediate position allows the bolt to be opened while still on safe. Flicked all the way forward, the safety reveals a red dot, and the rifle is ready to fire. Bill Buckley
SHARE

The new Steyr Pro THB is a tough, compact, general-purpose rifle chambered in the consummate general-purpose cartridge, the .308 Win. It has a go-anywhere, do-anything configuration that will resonate with shooters who expect their rifle to survive rough handling in inhospitable environments and still perform at a high level.

This is a squat, muscular rifle, with a 20-inch heavy-contour barrel, an oversize bolt knob, a strong synthetic stock that swells around the grip to fill the shooter’s hand, and a system of stacking spacers to customize the length of pull. Sleek and svelte it is not. It has the look and attitude of a junkyard dog.

That canine metaphor is doubly apt because the mascot of the United States Marine Corps—for those unlearned heathens out there—is an English bulldog named Chesty, after one of the most decorated Marines in history, Lt. Gen. Chesty Puller.

During the early years in the war in Iraq, the Marine Corps started to equip some snipers with short-barreled .308s. These smaller, handy rifles, which could be suppressed when needed, were ideal for fighting in an urban battlefield. They were fed by box magazines, had an 18-inch barrel, and gained a measure of attention when ex–Navy SEAL sniper Chris Kyle started shooting one—a GA Precision Gladius—after he got out of the military.

The Pro THB—which stands for Tactical Heavy Barrel­—is built along these same lines.

The barrel is topped with a knurled thread protector that unscrews easily in order to attach a suppressor or other muzzle device. The action comes with a one-piece Picatinny rail mounted that has 20 MOA of declination built into it for long-range shooting.

The rifle is fed by a polymer box magazine that holds four cartridges and has an innovative two-stage attachment system.

The magazine will click into place just shy of being fully seated in the magazine well—the first stage—so that the bolt can be closed without a round being chambered. Pushing the magazine to the second click seats it flush with the stock, where it will feed in a normal fashion.

During my evaluation, the Pro THB functioned perfectly. The four-lug action—it has two opposing lugs, with a second, smaller pair of lugs just behind them—cocks and cycles smoothly. Since the bolt body is as wide as the lugs, it glides easily back and forth in the action with nary a hint of wobble or play.

Staying on the scope while running the gun proved to be a simple matter. The rifle loads easily, even when you toss a single round into the oval ejection port after emptying the magazine, and extracts and ejects empties—via a Sako-style extractor and plunger ejector—with no fuss.

The rifle’s accuracy was excellent. The bulk of my evaluation occurred during a range session with winds gusting to 25 mph, making for challenging shooting conditions. The Pro THB handled it in stride.

I shot five different loads through the rifle: Federal’s Gold Metal Berger 185-grain Juggernaught, Sig Sauer’s 168-grain OTM, Nosler’s 165-grain AccuBond, Hornady’s 155-grain A-Max, and Barnes’ 150-grain TTSX. All of the ammo managed to print MOA or better 5-shot groups, and they all also shot to nearly the same point of impact. That’s a real testament to the versatility and craftsmanship of the Pro THB. It isn’t often that a rifle will handle such a wide range of bullet weights that well. The two best groups, by the way, came from the Nosler AccuBond (.583 in.) and the Barnes TTSX (.853 in.).

As always, the quality of the barrel, which has a 1:10 twist, is critical for this kind of accuracy. As the name suggests, the barrel is heavy, and so is the rest of the rifle. Unscoped, it weighs 8 pounds 11 ounces. The trigger is very consistent, breaking within an ounce or two of 3 pounds 5 ounces, but it is a bit mushy, with a hint of creep and overtravel. This is a small point, but I found it distracting at times.

You can get the rifle with an even shorter 16-inch barrel if you like, or you can go really long with a 26-inch version. Soon the rifle will be offered in the 6.5 Creedmoor as well. I like this rifle a lot. At $1,265, it isn’t cheap, but it delivers outstanding performance and utter reliability. It’s a working rifle that can handle a wide range of tasks—as long as you’re willing to lug it around.