3 Classic .22 Rimfire Revolvers You Still Need to Own 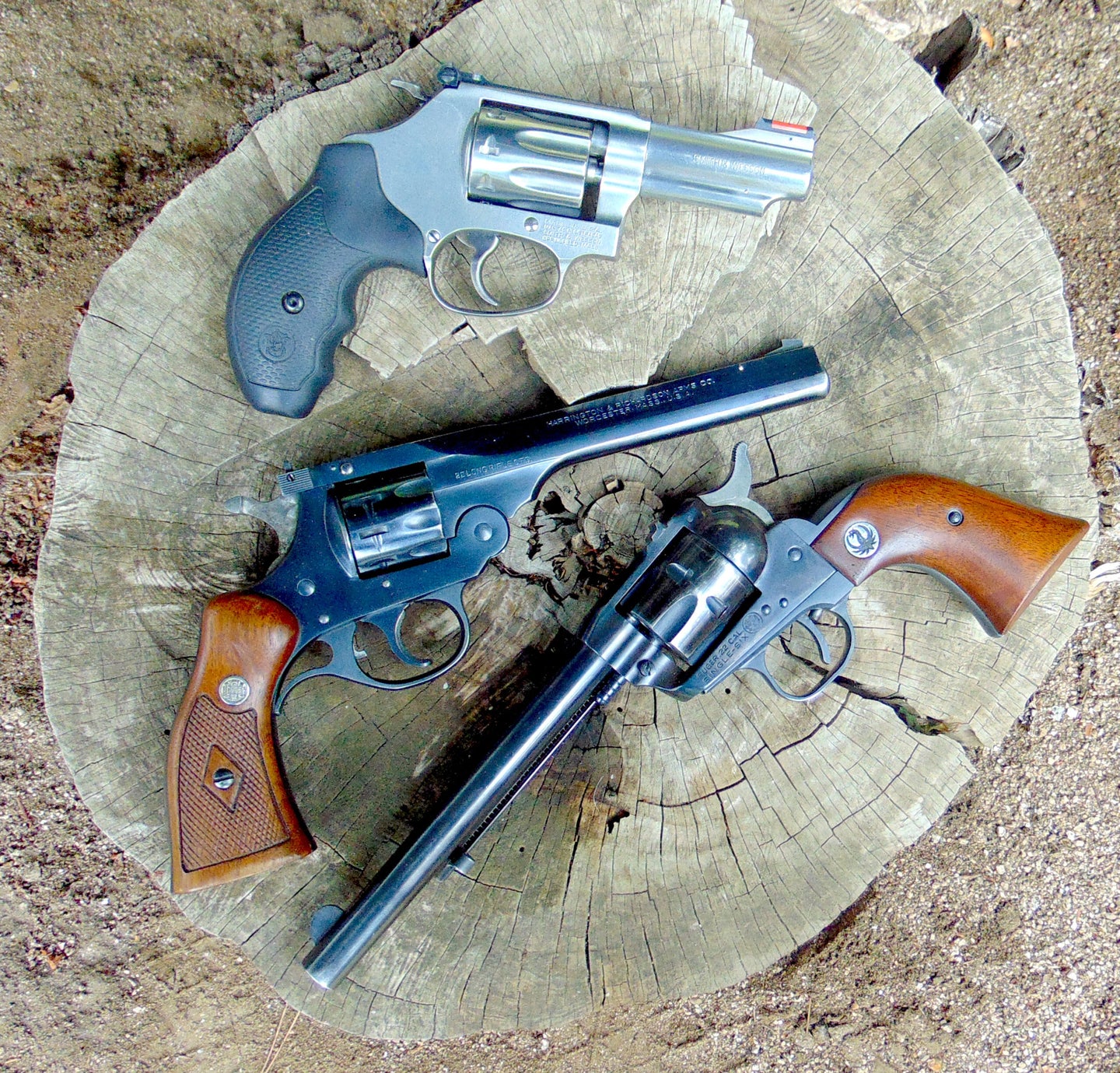 Modern semi-auto .22 pistols may be more sought after than old revolvers —particularly if you are a competition handgunner—but rimfire wheelguns still have purpose. They can be incredibly accurate for making precise shots on small game and have distinct advantages in the field. For instance, they are safer. Once you fire a revolver, the action stops. Which means there is only empty brass in the chamber—something to consider when you’re reholstering or recovering a head-tapped rabbit or squirrel.

Many revolvers sport longer barrels, which helps with accuracy (that’s why most hunting handguns—rimfire and centerfire—are revolvers). Semi-autos are typically smaller, lighter, and have more ammo capacity, which makes them excel in areas a wheelgun cannot. But if you’re strictly looking for better shot placement, a revolver is best.

There are three rimfire revolvers I classify as must haves: the Smith & Wesson Model 63, the Ruger Single-Six Convertible, and Harrington & Richardson’s Model 999 Sportsman. These firearms run the gamut of single-action, double-action, swing-out and top-break, yet all three deserve a place on any shooter’s short list of go-to models.

S&W’s J-Frame Model 63 is a direct descendant of the company’s revered six-shot Model 34 Kit Gun (1958-1991). But aside from its virtues as a “tacklebox plinker,” in the current ammo drought—which affects .38 Special availability to a far greater extent than 9mm—this little eight-shot stainless steel 3-inch is a perfect understudy for my Model 36 .38. They’re dimensionally similar in terms of overall length (7.3 inches). The rimfire M63 weighs 24.8 ounces, only slightly heavier than the 22-ounce 3-inch M36.

You can buy the considerably lighter alloy version—the Model 317—but at a wispy 11.7 ounces, it just doesn’t feel right to me, and is much more difficult to be accurate with if you don’t have a ton of experience with handguns.

Besides the obvious differences in cost, blast, and recoil fatigue, the Model 63 has plenty going for it on its own merits. Once I found the best-shooting ammo brands for my 63, I quickly discovered it shot better than I can hold (which is true of most every handgun I’ve owned).

In its role as a .38 understudy, the Model 63’s adjustable sights allow me to practice effectively with whatever brand of bulk .22 Long Rifle ammo I can find. Aesthetically, I could live without the red fiber optic front sight, but don’t feel strongly enough about it to swap it out for another. The trigger pull of my 63 is slightly under 2 pounds, impressive for a single action.

To assess the little revolver’s target potential, I shot several groups off sandbags at 25 yards. Using Aguila 40-grain Super Extra .22 LR HV solids, I could consistently produce eight-shot, 2-inch groups. My best effort was a six-shot group that measured slightly under an inch—a testimony to the smooth single-action trigger, and quality ammo.

Bill Ruger noticed a lack of single action revolvers in the handgun market when he premiered the Single-Six in 1953. Thirteen years after its debut, my dad shelled out $40 for a used one on my birthday. By then, it had morphed into a .22 LR/.22 WMR dual cylinder convertible—you could shoot both cartridges from the gun.

Mine is a 6.5-inch barreled fixed-sight model. It can still be had with fixed sights in a 5.5-inch trim. Adjustable sights came available in 1964 with the premiere of the Super Single-Six Convertible because there are too many point of impact variables with rimfires (magnum or not) to stay with fixed sights. Plus, the higher profile adjustable sights are easier on aging eyes.

There are so many Single-Six (and Single-7, Single-9 and Single-10) variants that you don’t have to opt for a Convertible. There are also currently 11 models of .22 LR/.22 WMR Convertibles listed in the Ruger catalog.

To me the most interesting is the Model 0662, a 7.5-inch stainless revolver with integral scope mounts on its ribbed barrel and black laminate stocks. And with an MSRP of $1,089—even taking inflation into account—it’s a bit steeper than the used price on my vintage Old Model.

For accuracy, the best .22 WMR results I was able to attain was with Hornady 45-grain FTX Critical Defense, which averaged 1,326 fps from my 6.5-inch barrel. Not the fastest, but it produced sub-2-inch groups at 25 yards. The best shooting .22 LR entry was some well-aged Winchester Wildcat, which produced a cluster of just under an inch.

Of course, the tactile pleasure of setting the hammer at half cock to spin the cylinder has been lost to single-action traditionalists since the New Model Single-Six was introduced in 1973. The defining feature of the New Model is the transfer bar system. Now all you have to do in order to free-wheel the cylinder is flip open the loading gate.

The Old Model is considered by many to have a superior trigger. I can’t argue that. Mine breaks at a clean 2.5 pounds. Good as it is, you’ve still got that long single action lock-time to contend with, so good follow-through technique is a must.

If any .22 revolver qualifies as a sleeper it would have to be Harrington & Richardson’s Model 999 Sportsman, a nine-shot top-break double action made from 1932 to 1986. It lacks the frontier-era grace of the Single-Six or the pocketable cool of the S&W M63, but the H&R—although it looks clunky in comparison—handles and shoots incredibly well. Even toward the end of its production run (which coincided with the closing of the H&R plant in 1986) it cost well under $200.

This M999 is a 1954 vintage 2nd Model, featuring a 6-inch barrel and two-piece walnut grip panels. It is in fine shape and has an unloaded weight of 34 ounces. In 1974 the M999 was redesigned with a transfer bar. But this oldie has the traditional aesthetic pleasure of a hammer-mounted firing pin set in a jeweled hammer spur.  The top-break action allows quick removal of the cylinder for cleaning. And simultaneous ejection of spent empties is handy but can occasionally require a bit of wrist action to kick out spent brass.

The broad, adjustable sights are easy to acquire, and windage adjustment can be made using the rear sight. Elevation can be changed with a small screw beneath the frontsight, just above the muzzle.

To test the M999 for accuracy, I used three brands of .22 LR: 40-grain Federal Gold Medal Match, 40-grain Sellier & Bellot Club, and Eley 42-grain Contact Subsonic. At 25 yards, the Eley’s nine-shot groups averaged a hair under 2 inches and won out over the competition, but just barely. And all groups contained sub-inch clusters of at least four shots.

The single action trigger pull on the H&R is a crisp 3 pounds, which contributes greatly to the M999’s shootability. The double-action pull, however, was considerably less tractable, breaking at a heavy 11.5 pounds. Considering the uses to which the M999 would be put, there seems little reason to resort to trigger-cocking.