.22 LR for Self Defense: Ammunition Test and Review 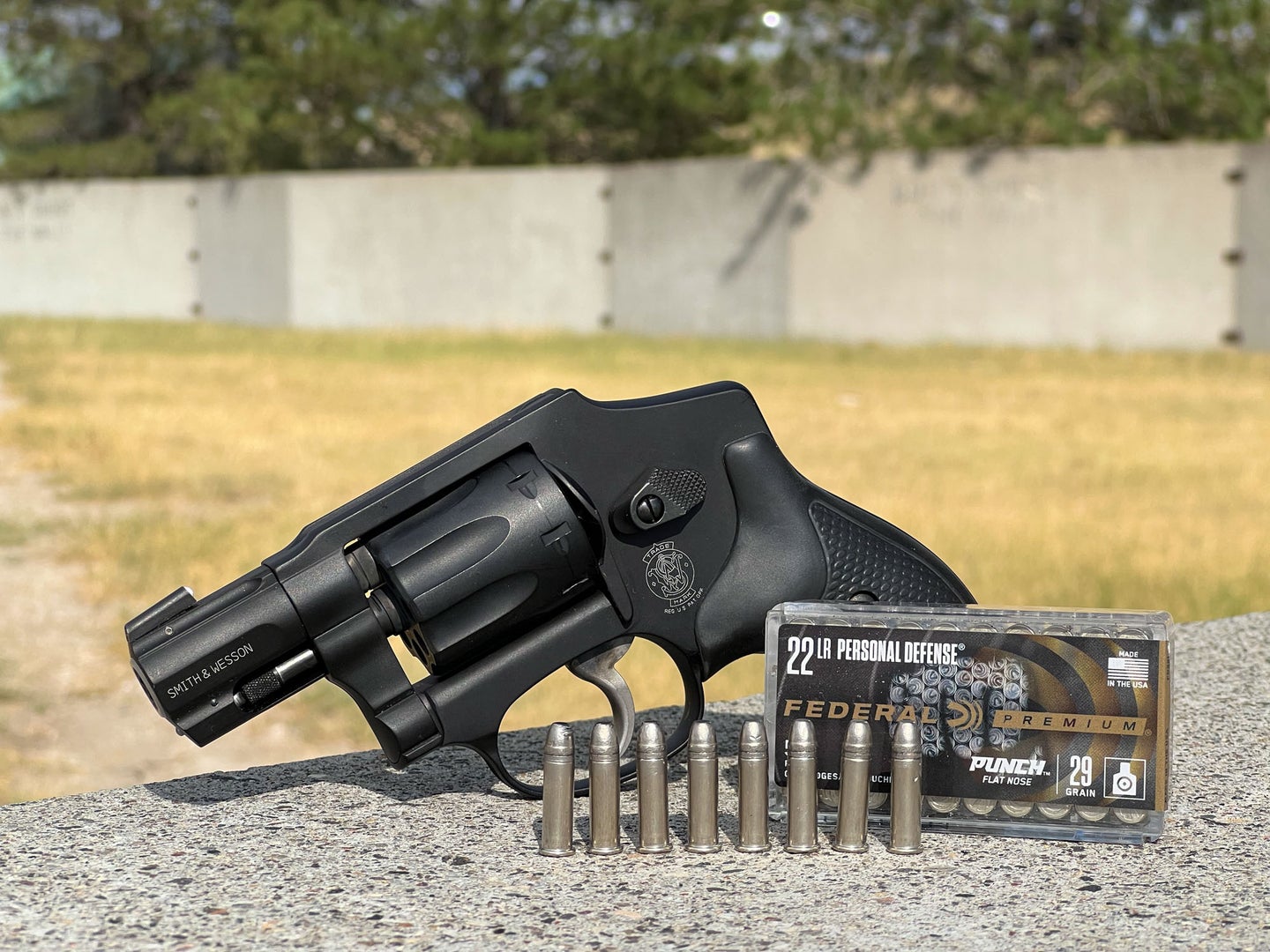 A .22 LR for self-defense is often derided as insufficient, but Federal's Punch line gives the rimfire noticeable bite. John B. Snow
SHARE

When mulling over the question of what’s the best caliber for self-defense, the .22 LR is not at the top of anyone’s list. However, carrying a .22 for self-defense isn’t unreasonable for some shooters and some circumstances—and ammo makers have responded to that need.

The Federal Punch line of ammo spans many major self-defense calibers from 200-grain 10mm Auto on down to the 29-grain .22 LR, which was introduced in 2021.

In centerfire handgun calibers (.380 Auto and up) the Punch loads jacketed hollow point bullets, but in the rimfire configuration it uses a nickel-plated flat nose design. The published muzzle velocity from a 4-inch barrel is 1080 fps and per Federal’s product specs the bullets are designed to achieve deep penetration from short-barreled handguns, which would be the typical configuration for someone carrying a .22 LR for personal protection.

When I bought my first carry guns back in the 1980s, I added a Beretta Model 21A as a backup option. It was never very reliable—at least with the ammo I put through it—so it spent the majority of its time in my safe except for occasional trips to the range. It had a tendency to misfeed and I also didn’t care for the micro-sized safety, which I found awkward to manipulate. I don’t know how many times I actually carried it, but it wasn’t often. I just didn’t have confidence in it, and when compared to my utterly reliable .40 S&W Glock 23, I could never bring myself to count on the little .22 LR if carrying the .40 was an option.

But times have changed. We now have better firearms and better ammunition, so I was curious to evaluate the .22 LR Punch with an open mind to see if my age-old bias against the .22 LR for self-defense still had merit or was a relic of outdated thinking.

To help test the ammo, I reached out to Jeff Hoffman at Black Hills Ammunition. He agreed to do some gel testing with the .22 LR Punch using a variety of firearms, while I spent time at the range evaluating it under practical shooting conditions.

The classic answer to this question is that it is suited to women and those who are recoil sensitive. I find this analysis unsatisfactory. Even my elderly mom can handle a .380 Auto and a well-balanced .38 Spl. wouldn’t give her any issues. She doesn’t have any special handgun handling skills that elevate her above the average shooter.

I think the real answer is that there are legions of people who have .22s and might not own any other handgun, or who don’t have a larger-caliber handgun that is suitable for all their carry needs. They might have a full-framed duty pistol that isn’t convenient to carry or have a compact pistol that they have difficulty concealing when wearing lighter clothing.

Then there’s the issue of ammo. We all know that regular training with any firearm is important and especially so with defensive handguns. Not everyone has the budget to purchase a sub-compact auto or revolver and supply it with enough ammunition to keep their shooting technique sharp. For these shooters—and there are a lot of them—a .22LR for self-defense makes sense. It’s also worth noting that Federal just expanded the Punch line to include a .22 WMR offering as well, which shoots a 45-grain jacketed hollow point at 1000 fps.

For this evaluation I used two 8-shot revolvers, a Ruger LCR and a Smith & Wesson Model 43 C.

The Ruger tips the scales at 14.4 ounces empty and comes with a generously sized Hogue grip. The Smith is more svelte, weighing 11.4 ounces. Both revolvers are built on aluminum frames, but the Ruger’s frame is bulkier and has a steel cylinder while the Smith 43 C’s cylinder is made of aluminum. That, along with the Smith’s smaller grip account for the weight difference.

Both are pleasant to shoot, however, and easy to control. With their hammers concealed within the frame, both are double-action only. In terms of trigger control, the Ruger is the smoother of the two—though the Smith’s isn’t bad by any stretch. The LCR’s fire control system incorporates what Ruger calls a “friction reducing cam” and it gives the revolver a consistent and even stack as the trigger is pulled to the rear. When running the Smith, in contrast, you get feedback from the timing mechanism through the trigger. The overall pull is smooth, but that tactile feedback is present, whereas you don’t get anything of the like with the Ruger.

Federal .22 LR Punch at the Range

Practically speaking, both revolvers ran the .22 LR Punch similarly well. Both have notched rear sights with a front post marked in white. The 43 C’s rear notch is U-shaped with a large round white bead up front, and the Ruger has a square notch with a square-sided front ramp sight emblazoned with white.

I did a series of drills on paper and steel at 3, 7, and 15 yards. Both shot fast and accurately, and I think most shooters will be able to get lots of hits on target quickly with a bit of practice. Recoil is negligible and as long as a shooter has a solid base of handgun shooting fundamentals their hit percentage should be excellent even when running the guns at speed.

Hoffman does a lot of bullet testing in ballistic gel. Many of his customers are military and LE and require documentation on how the bullets and ammunition they’re considering performs. Done correctly, the gel is calibrated to give apples-to-apples data so you can compare one bullet’s results to others with confidence. (The calibration is done by shooting a BB at a set velocity and measuring its penetration in the gel. If the BB penetrates too far, or not enough, that indicates the gel wasn’t properly prepared.)

Ballistic gel is meant to mimic the density of human tissue, so the depth of bullet penetration in gel is indicative of how the bullet will perform against a person. Of course, factors like clothing, shooting through barriers, striking bone, and others will effect a bullet’s real-world results (and which is why the full FBI testing protocol—the industry standard for defensive ammunition performance—requires data on more than just plain gel) but the general expectation is for a self-defense load to penetrate between 12 and 18 inches.

Now gel gives as lot more information than maximum penetration depth. The bullets create a wound channel in the gel that give a feel for its terminal ballistics. Hoffman measures that wound channel, looking at the cavity created by the bullet as it traverses the gelatin block. He records where the cavity is at its widest, where the cavity starts, and the length of the cavity.

Federal .22 LR Punch in the Lab

Hoffman ran the Federal .22 LR Punch through three firearms with different barrel lengths. They included a short-barreled (2.4 inch) Beretta Model 21, a Ruger Mark IV with a 4.4-inch barrel, and a Ruger 10/22 with an 18.5-inch barrel.

“I was pretty impressed,” said Hoffman. “Both the .22 pistols penetrated more than 12 inches, which is the threshold that the FBI likes to see. They want from 12 to 18 inches of penetration and this bullet accomplished that.”

The chart includes results from a 9mm +P defensive load as well, shooting a Hornady 124-grain Jacketed Hollow Point at 1065 fps from a 3-inch barreled pistol. The numbers show how the 9mm outperforms the .22 LR, but the difference is less than I would have thought.

With 8 rounds on tap that can be fired quickly and accurately in an easy-to-carry and conceal revolver with purpose-built ammo, you can see how a .22 LR for self-defense becomes a viable option.

Is a .22 going to displace my compact carry 9mms or my 5-shot J-Frame as an everyday carry option? Probably not. But I won’t look down my nose the same way at someone who opts to use a .22 LR for personal protection.

The best gun to have in a fight is the one that’s with you—and if your circumstance dictates that it be a .22 LR, there’s no need for you to feel under-gunned when you have something like Federal’s .22 LR Punch loaded in the magazine or cylinder.