The Hog Dogs of Alabama

The bawling of a blackmouth cur is music to a pig hunter's ears. But once that hog bays up, the real excitement begins

JJ (left) and Duke ride on the hood to scent hogs while Brian Miller drives down trails. Hunters call this technique rigging, and once the dogs cut a fresh pig scent, they'll start barking. That's when the hunters let the dogs loose and the chase begins. Tom Fowlks
SHARE

Randy Brown has been fascinated with blackmouth curs ever since he read Fred Gipson’s Old Yeller as a kid. As he grew up and got into hog hunting, that fascination became an absolute passion. Brown owns 17 of these curs—“yellow dogs,” as he calls them—and four American bulldogs for chasing wild pigs near his home in central Alabama with his best hunting buddy of 25 years, Brian Miller. It took Brown a decade of researching, testing, and breeding dogs before he was able to assemble a pack that perfectly fits his style of pig hunting. Brown and Miller hunt by rigging—which means they have two of their best scenting dogs ride on the front of their truck (the rig) while they drive down trails. When the dogs catch the scent of a pig, they start barking, and the hunters cut them loose. Then the chase begins. Rigging is a common practice among Western houndsmen who target bears and mountain lions, but it’s unusual in the South to use hog dogs to hunt this way, Brown says. Blackmouth curs are athletic, protective dogs that are eager to please and extremely loyal. Brown makes the most of those personality traits. If his dogs can’t strike a pig from the truck, he’ll cast them in a 300-yard loop, and then they’ll come back—unlike some big-running hounds that could be gone for the whole morning.

But once the curs get on a hog’s scent, they stick to it—especially JJ, the lead dog, Brown says.

“You can watch him on the GPS. When he loses a track, he’ll make circles until he picks it up again. Then he’ll shoot out of there on a straight line, and you know he’s back on that hog,” Brown says.

Once the curs have a hog bayed, Brown and Miller rush to the spot with their catch dogs—two massive American bulldogs. The breed is a descendant of the now extinct Old English bulldog, which was brought to the States by working-class immigrants hundreds of years ago. Ever since then, the American bulldog has been catching feral pigs for Southerners and guarding their farms.

During that time, the role of the catch dog has not changed. His life’s work is to bite the pig and hold it so his hunters can move in and kill it with a knife to the heart, an adrenaline-kick ending to a wild chase through the backwoods.

“I just love the thrill of watching the dogs I’ve trained,” Brown says. “No two hunts are ever the same. You never know what’s going to happen.” 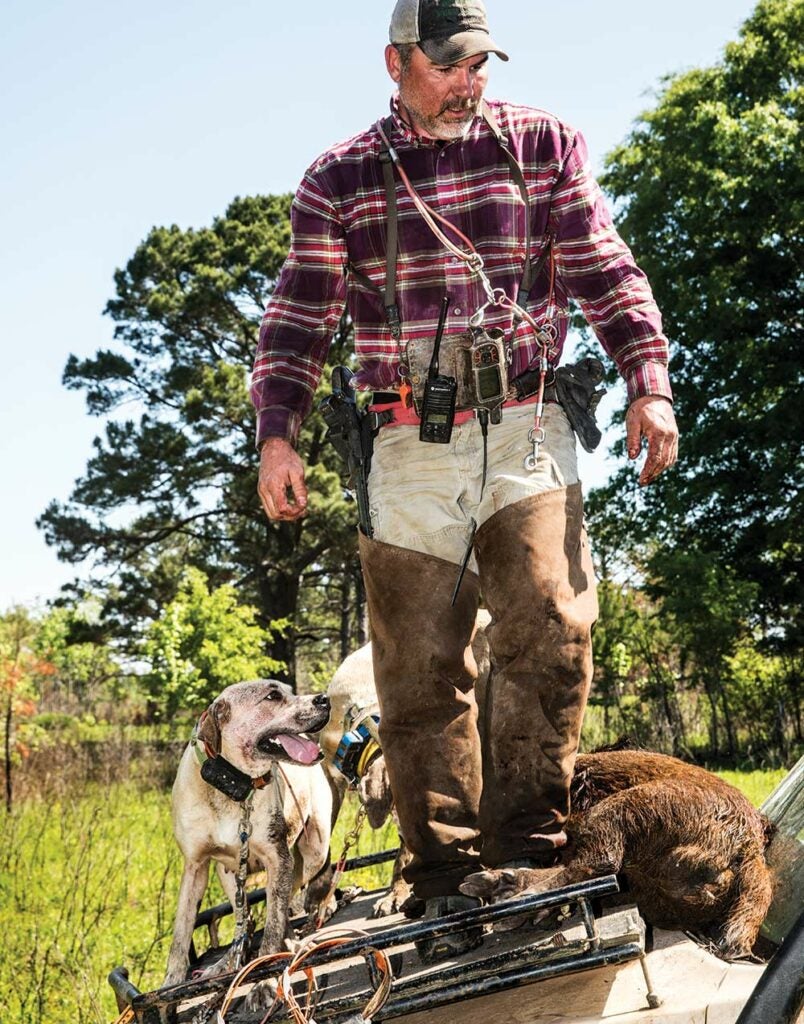 Randy Brown loads up a pig after a long, grueling morning hunt. The hog took Brown’s blackmouth curs on a chase that covered almost 10 miles before they were able to finally get him bayed in a swamp. Then Brown and Miller joined the fray with the catch dog. 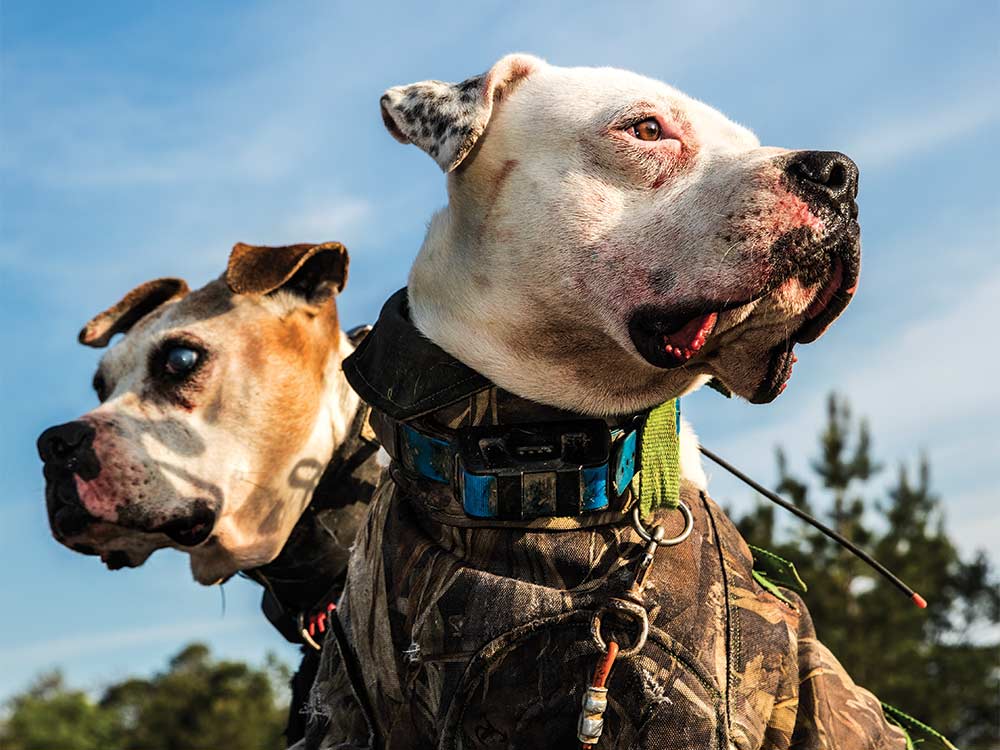 Tonka (right) is a catch dog in training. Luckily, he’s got hog catching in his blood and his two parents, Diva (left) and Tank (bottom left), to learn from. Brown gave Tonka to Miller, and he gets to run with the big dogs on training hunts. 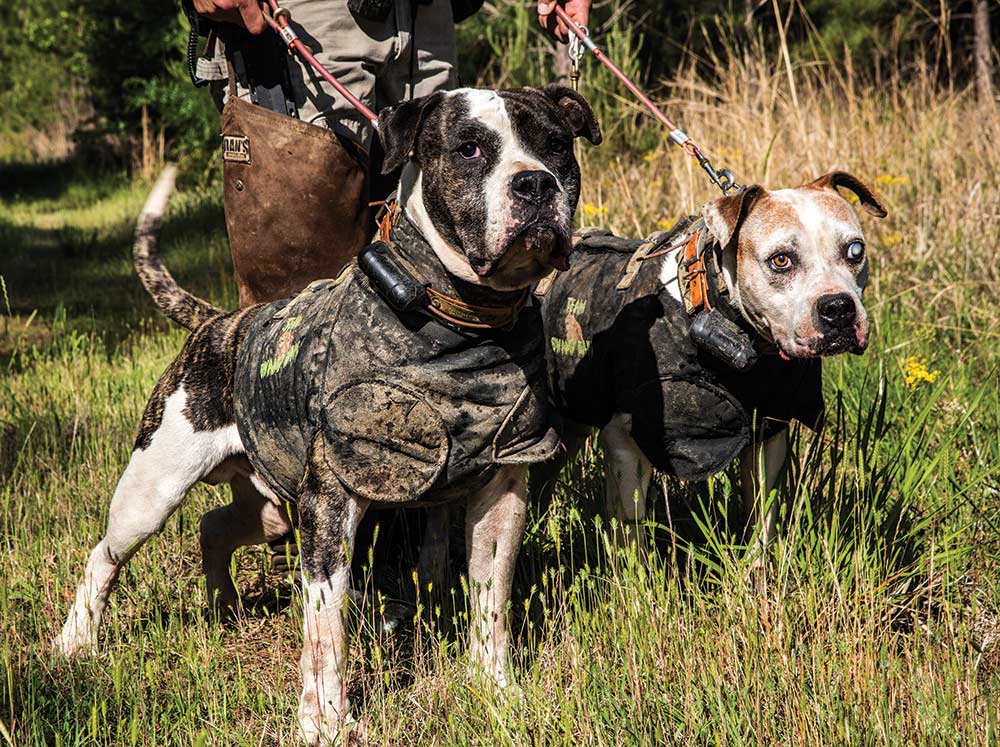 Running with the Bulls

Tank and Diva are 205 pounds of hog-catching muscle wrapped in Kevlar. Years ago, Brown switched from using pit bulls to American bulldogs because the latter are larger and can hold their own better against the biggest pigs, which can weigh 300 pounds. 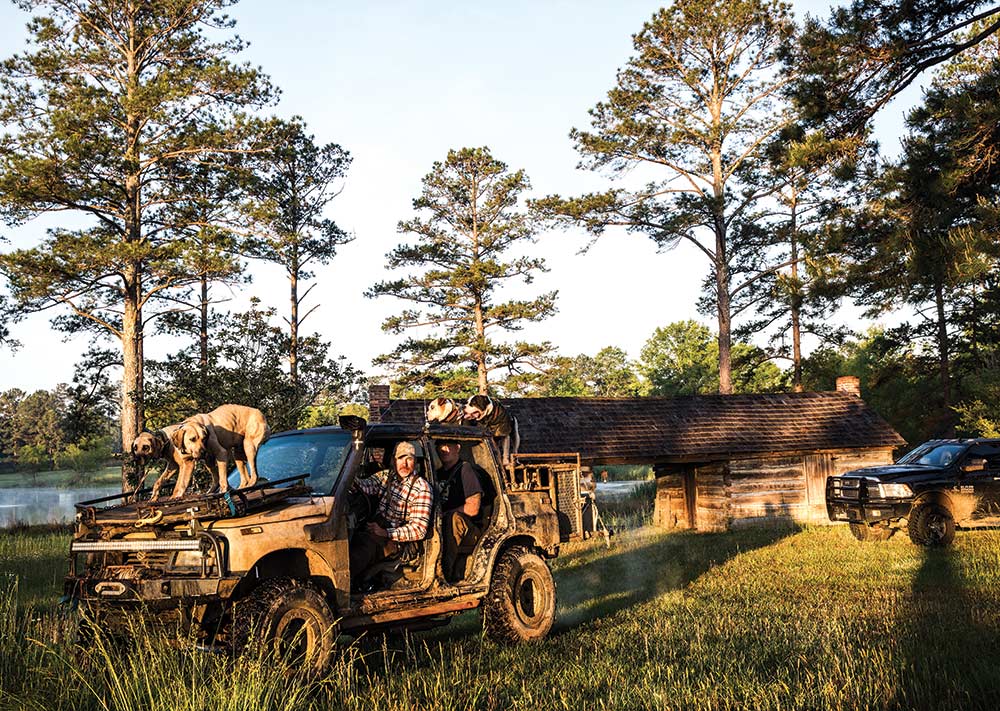 Brown perfected his hog-hunting vehicle by taking a Sawzall to a 1995 Suzuki Sidekick. It’s got a custom hood rack and dog boxes in the back. 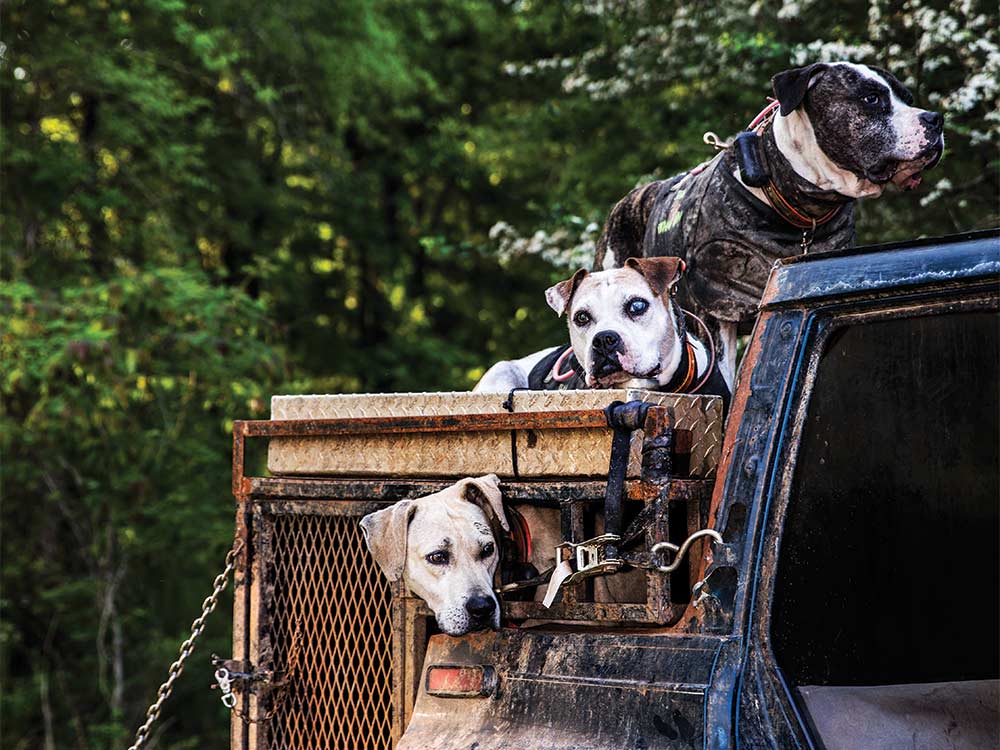 The bulldogs and reserve bay dogs wait their turn in the dog boxes. Brown always tries to run a young dog with two veterans so it can gain experience during a hunt. 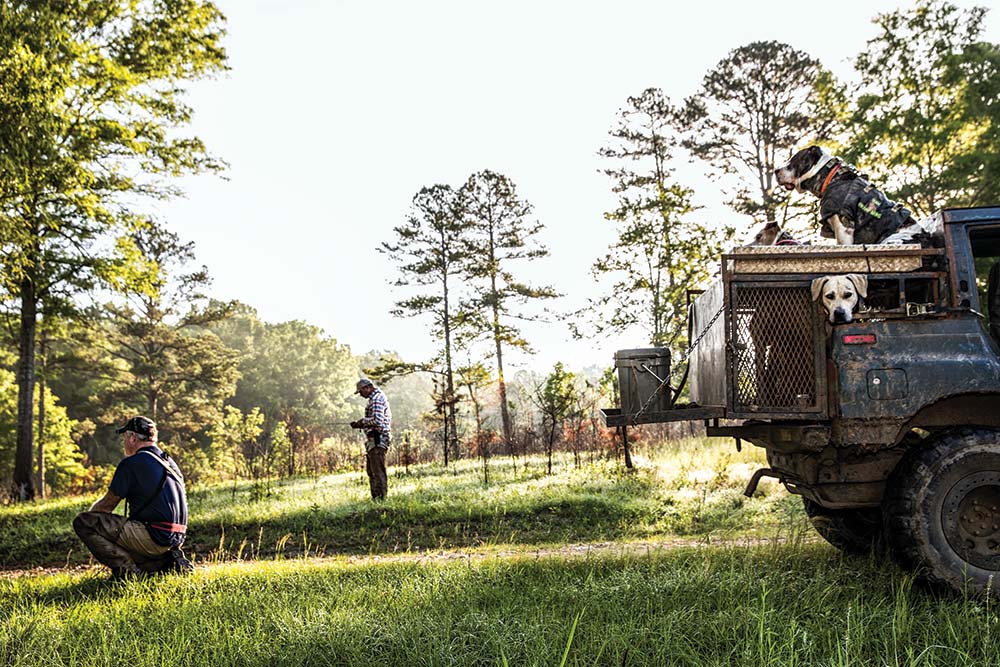 Brown watches the curs on a GPS tracker while Miller listens for distant bawling. Brown’s curs run a track silently—they don’t bark constantly like some hounds—so when he hears them barking, he knows they’ve got a hog bayed up. 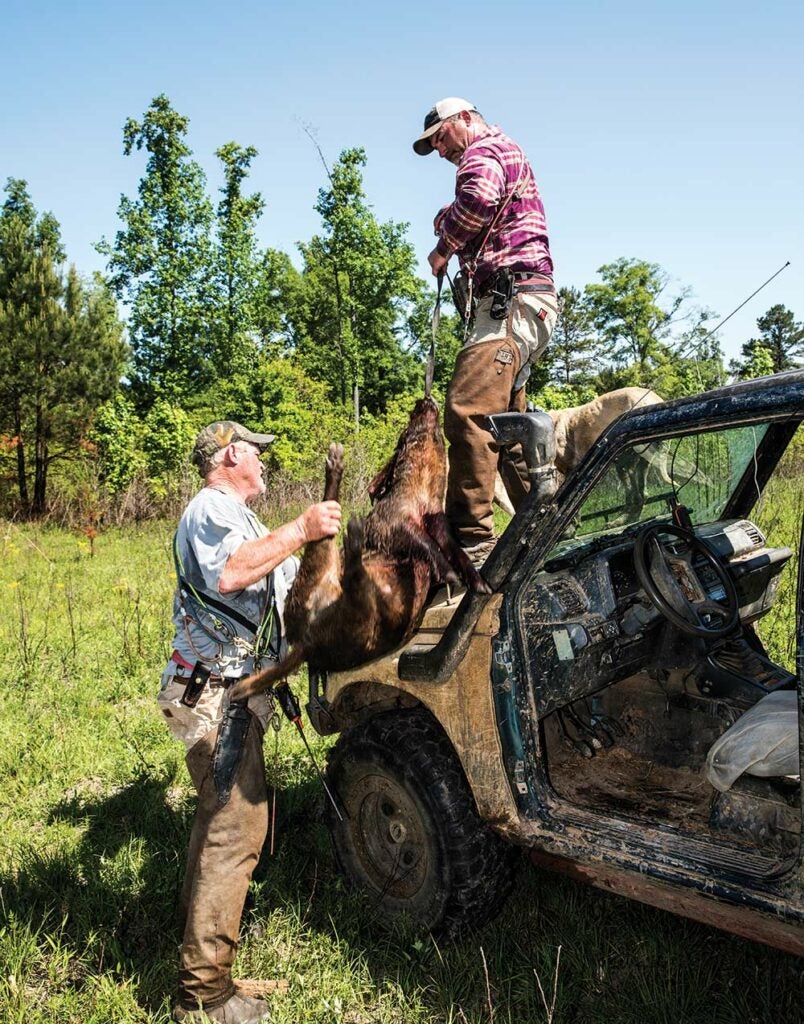 Miller and Brown hoist a good-size hog onto the Suzuki. Giant old boars are always the goal—and are usually the most challenging to catch—but small- and medium-size hogs make for the best-tasting meat. 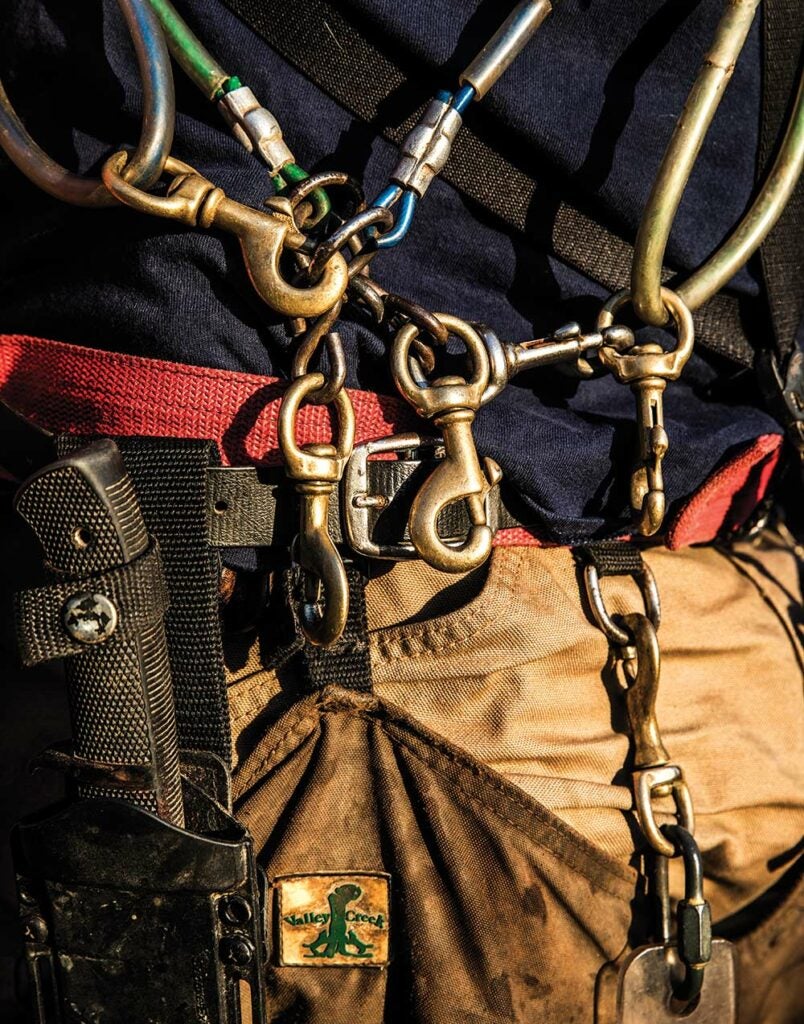 Tools of the Trade

When it comes right down to it, a sturdy knife and a few leads are all Brown and his dogs need to hunt and kill pigs. But it doesn’t hurt to have a four-wheel vehicle, a gps, and a backup .45 pistol. 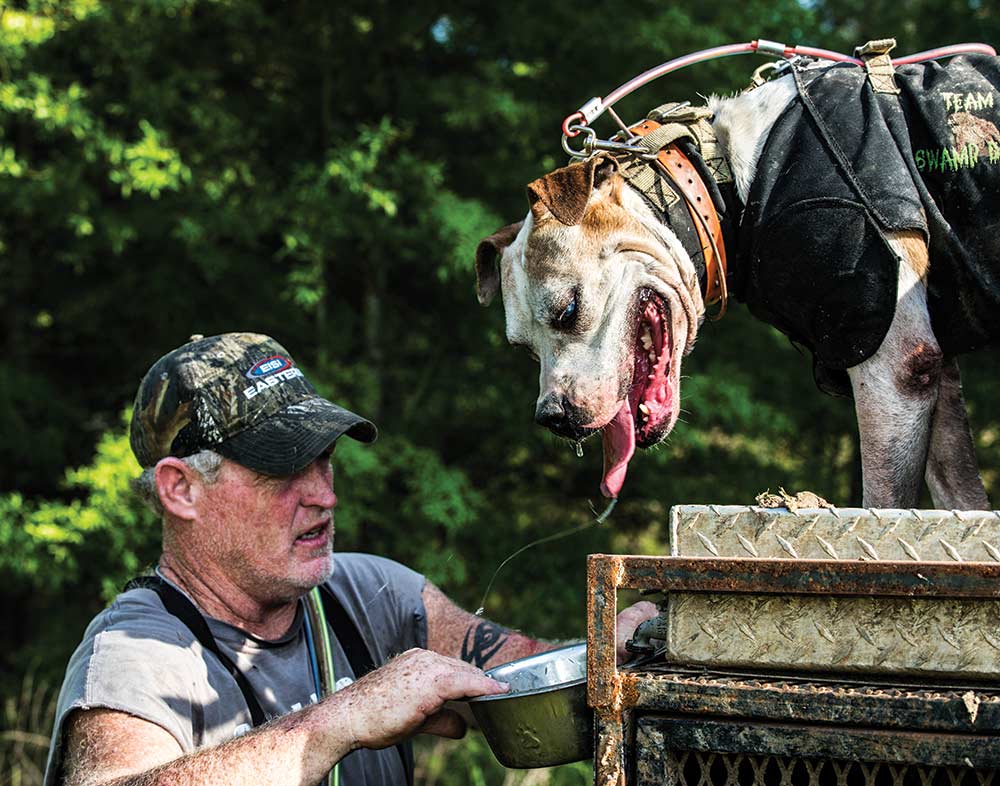 Diva gets a well-earned rest and some cool water after the hunt. Midday heat can be one of the biggest dangers to a dog on a Southern hog hunt. Brown tries to get the pig caught early in the morning so he can rest the dogs in the hottest part of the day. 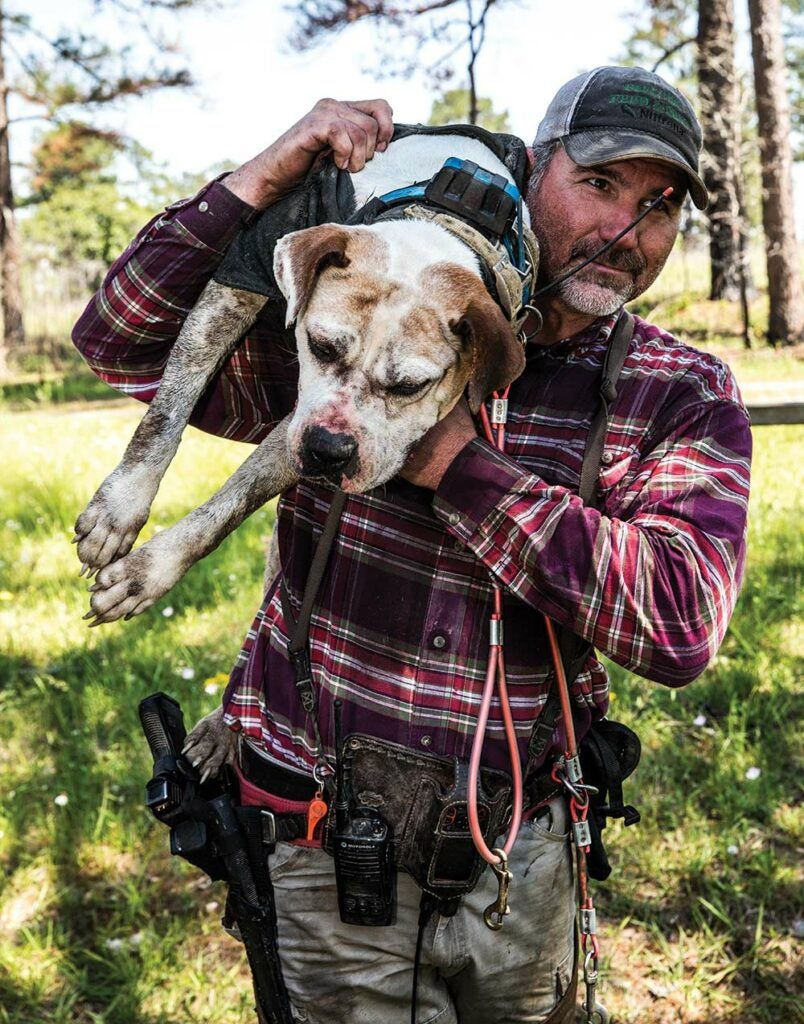 Diva gets a ride back to the rig. As a pup, she had little interest in hunting pigs, and Brown thought she’d end up as a yard dog. But at a year old, a switch flipped and she caught her first pig. Now, at 6, she’s an aggressive, smart, and powerful catch dog. 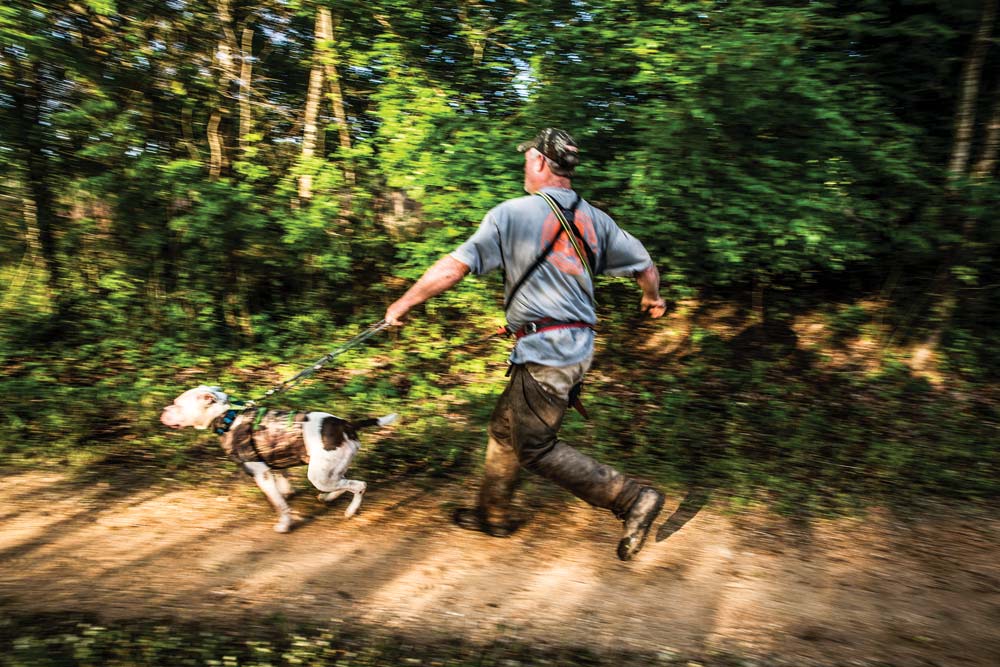 Running for a Fight

Miller and Diva head toward a bayed pig. The minutes between the hog baying up and the kill are the most dangerous—for dogs and hunters alike. It’s the dog’s job to keep the pig from running or charging, and it’s the hunter’s job to dispatch the hog quickly. 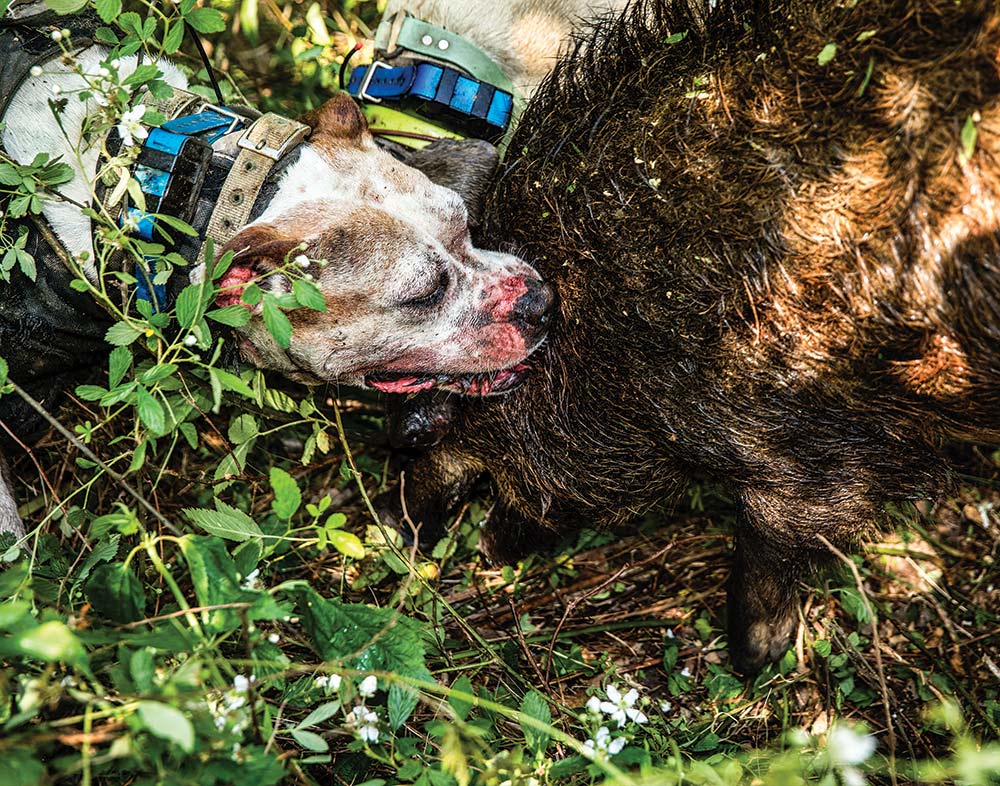 Diva holds down a 140-pound boar that the curs bayed in a brier patch. Most of the time, boars will run to the thickest, nastiest cover they can find. Brown says he’s seen one clever boar hide in a creek with only his snout sticking above the water. 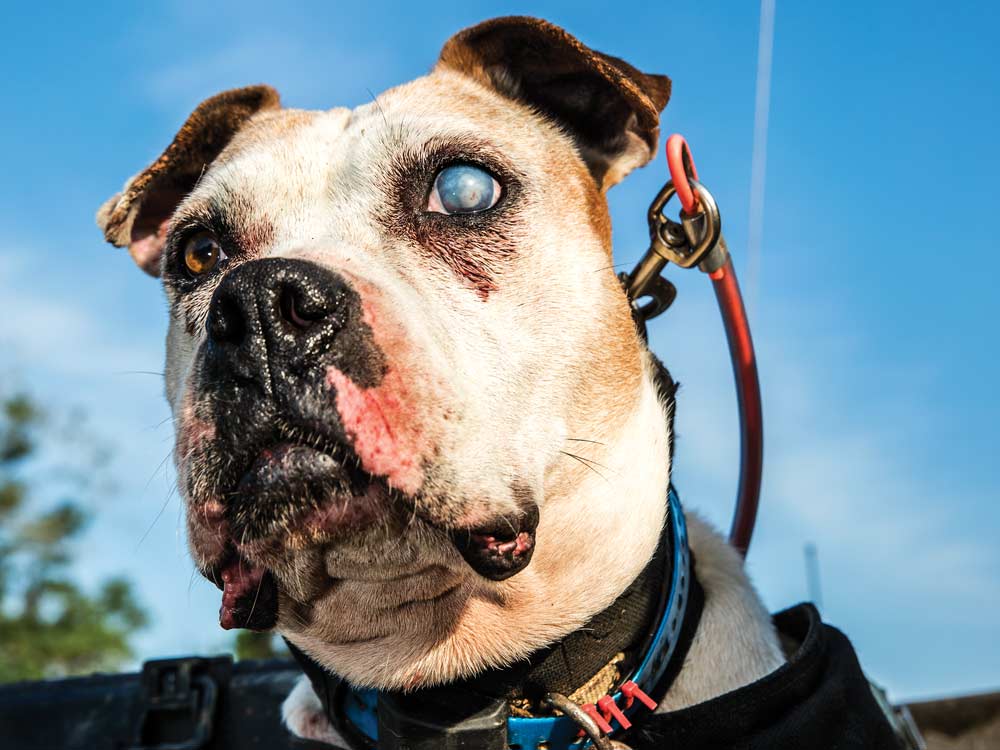 Being a catch dog is a hazardous occupation, and it’s not uncommon for dogs to get injured—sometimes even killed—during a hunt. But Diva actually got her eye put out in an accident as a pup, not during a scrap with a pig. 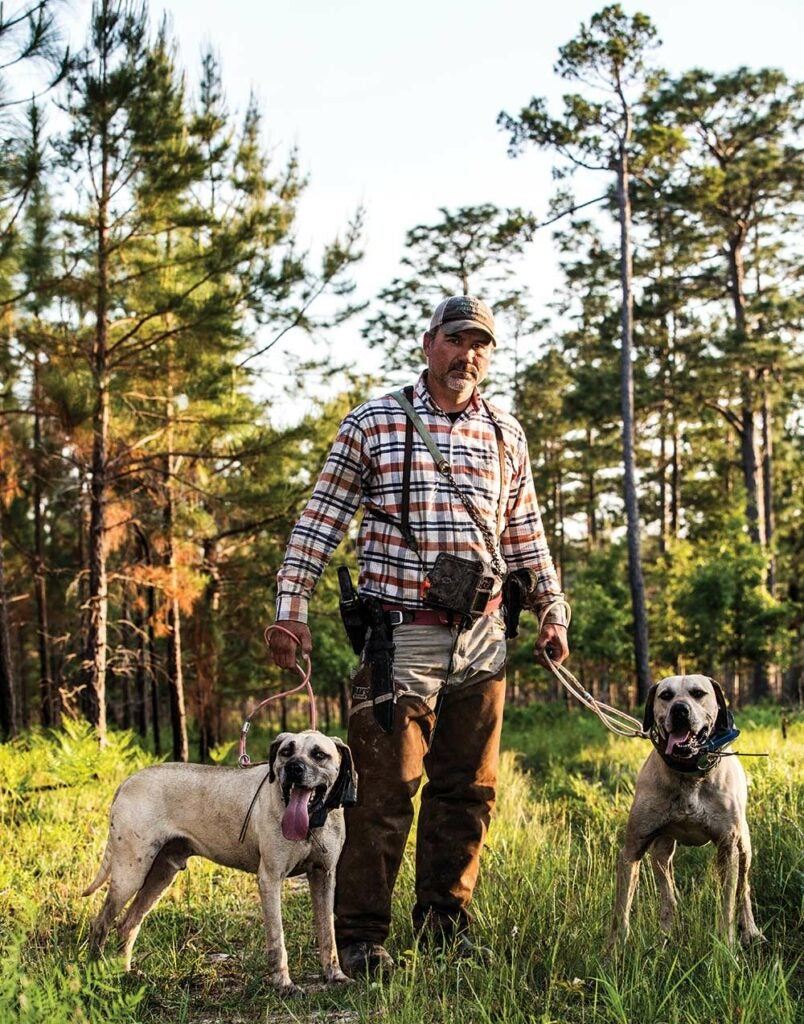 JJ (left) and Duke are ready for their next chase. JJ is Brown’s lead dog and the sire for most of his blackmouth cur pack. He took years to develop, and early on, Brown wanted to give him away many times. But at 3 years old, the dog “grew up and got himself a job,” Brown says. JJ is effective because of his scenting ability. He can ride on the front of the rig and smell a pig from 800 yards off. When he gets on a track, there’s no stopping him. He’s a deadly combination of drive and natural ability. 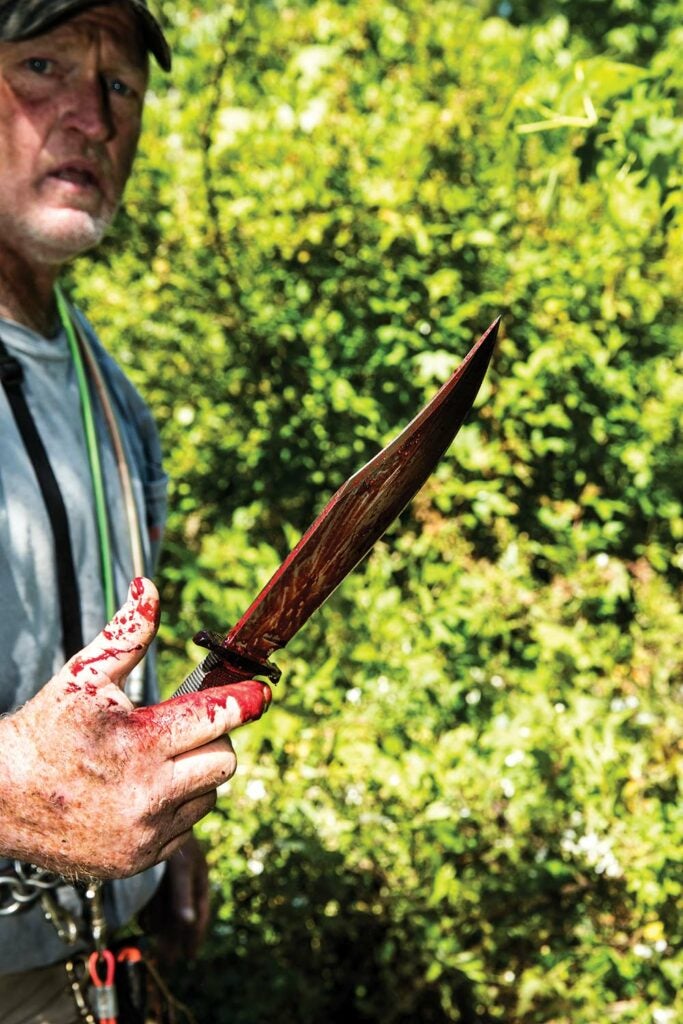 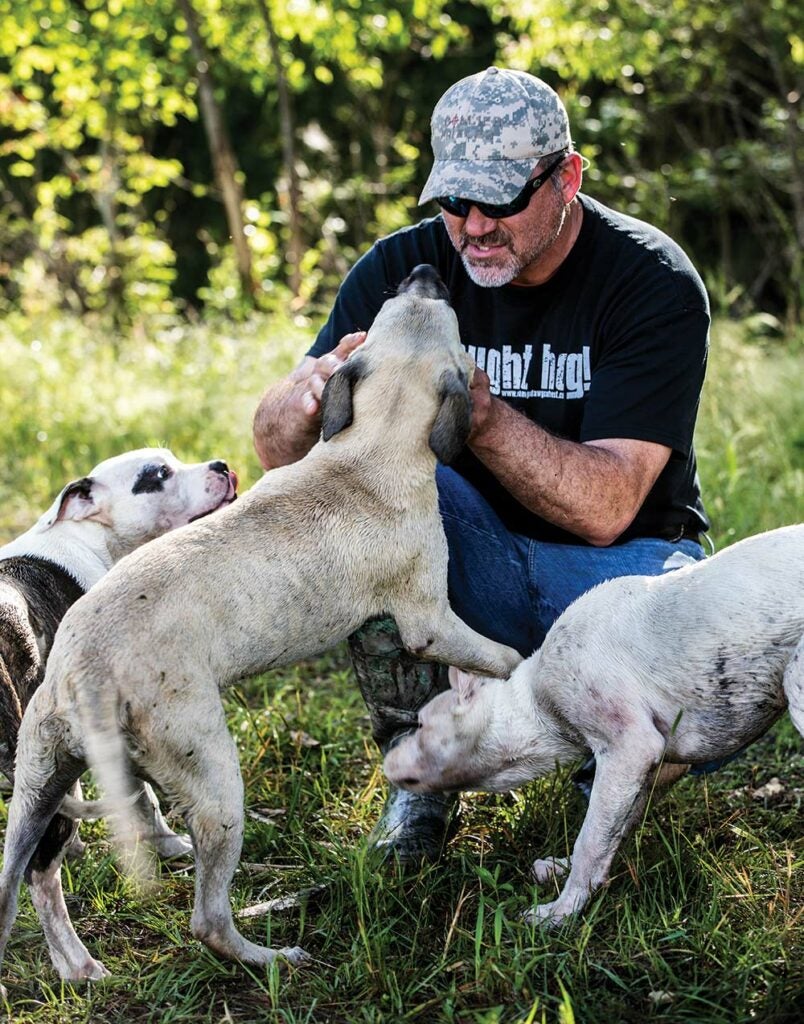 Brown plays with his bulldog and blackmouth cur puppies. He keeps a rotation of pups, young dogs, and old veterans so the old dogs can help train the pups, and so there are always new hunters coming up through the ranks. 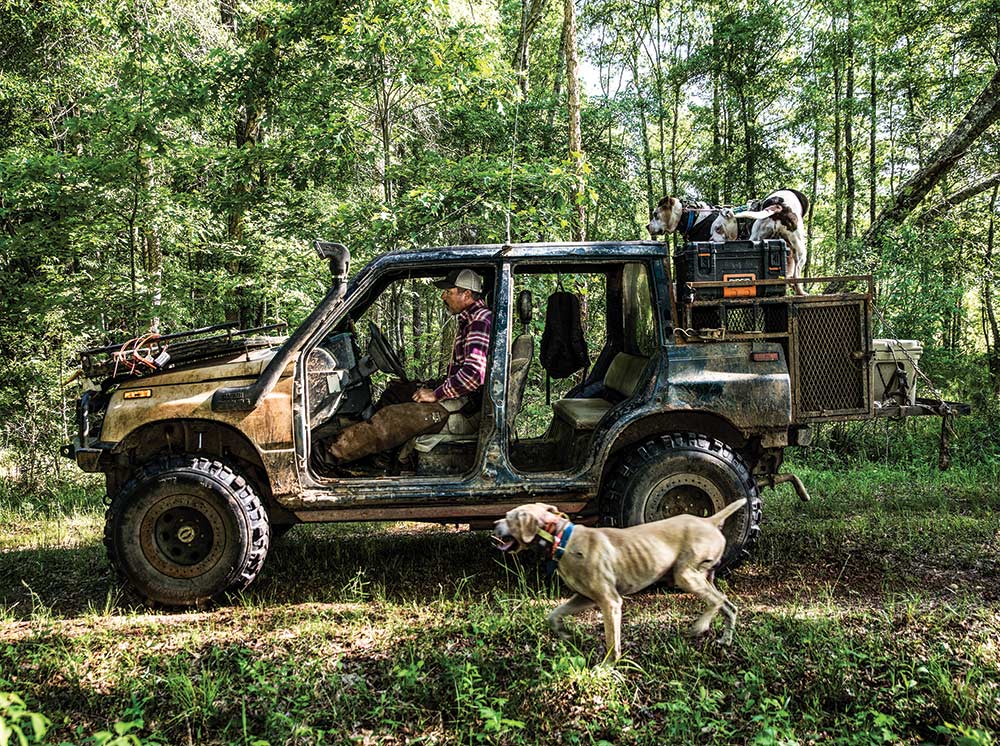 Calling it a Day

The hog-hunting crew heads home after the morning hunt. Brown runs his dogs as much as he can throughout the year and kills hundreds of feral pigs on his home hunting grounds.
Alex Robinson