After blowing his first shot opportunity, Dakota Landers called up a couple buddies and stalked this giant boar under the cover of darkness 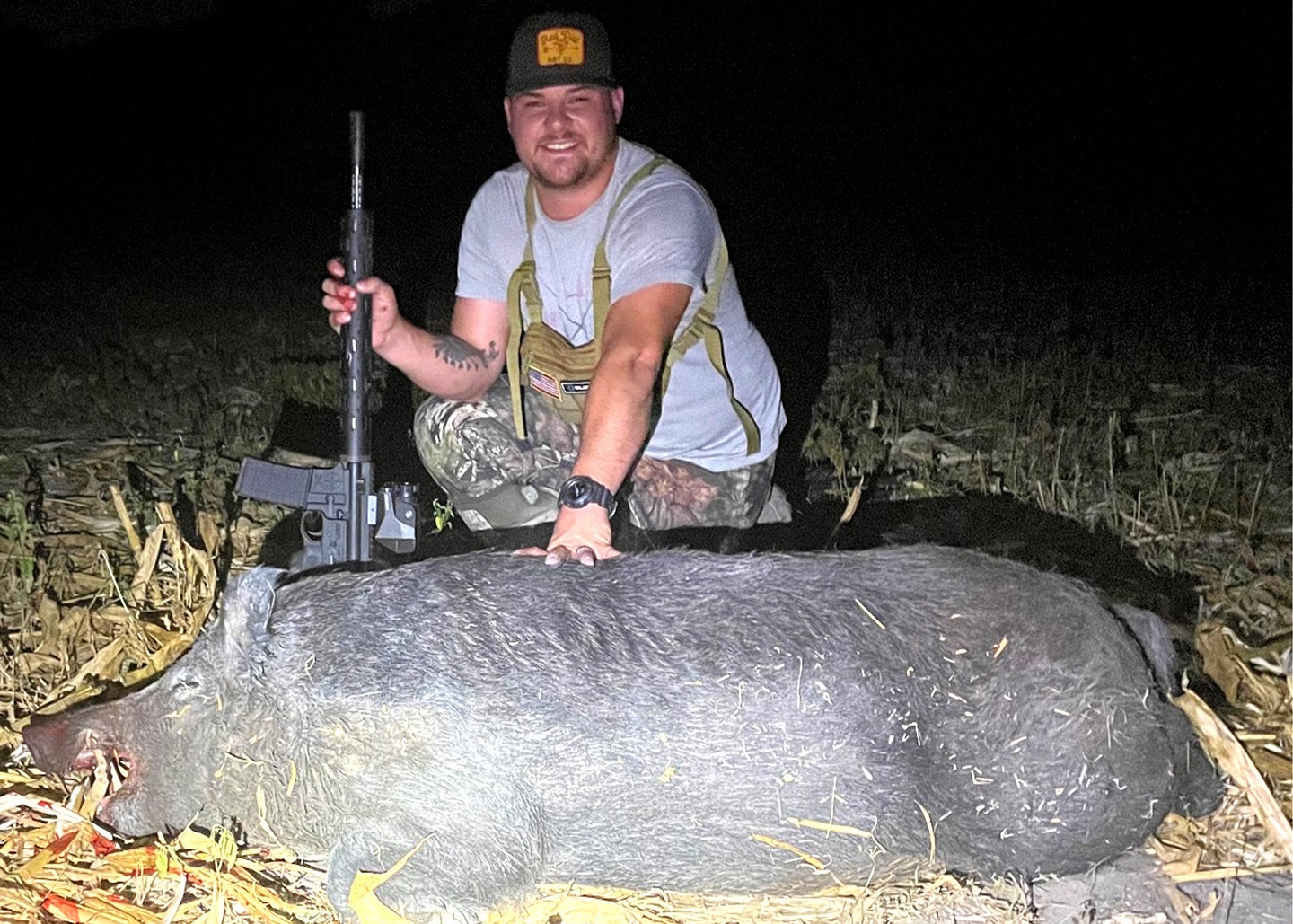 A hog hunter in North Texas killed the biggest pig he’s ever seen from a cornfield not far from the Oklahoma border. It took Dakota Landers two attempts and a little help from his friends, but he eventually dropped the 350-pound boar under the cover of darkness on Aug. 18.

Landers tells Outdoor Life that late summer has always been his favorite time to chase wild pigs near his home in Fannin County. This is when farmers are cutting corn, soybeans, and other crops. For all the hogs in the area that have been lying low and hiding from the summer sun, all those combines and threshers might as well be diesel-powered dinner bells.

“I spend a lot of time driving around scouting” Landers says. “I’m not even necessarily looking for animals. I’m just checking out all the fields that are being cut, and if I see a farmer in one of those fields, I’ll drive up there and ask him if I can come back after dark and hunt.”

Nine times out of 10, the farmers are more than happy to oblige, Landers says. That’s because, in a state that’s home to at least 1.5 million wild hogs, farmers need all the help they can get these days. Even though studies have shown that large-scale trapping is far and away the most effective method for controlling feral pig populations, a willing hunter with a rifle and thermal scope can also help cut down on the amount of crop damage that hogs cause locally.

So after he got permission to hunt a new field last Monday, Landers says he was driving by after dark on Tuesday evening when he stopped to give it a look.

“Sure enough, there’s this pig standing in the middle of the field,” he says. “And I could tell through the thermal that he was huge.”

Landers hopped out of the truck, but as he worked his way around the field and got within range of the pig, he realized he had made a big mistake. He had his gun in hand—a Colt Competition AR-style rifle chambered in 5.56 and fitted with a Sig Sauer thermal reflex sight—but since it had been riding along in the vehicle with him, there wasn’t a round in the chamber yet.

Man, I shoulda racked it up by the truck, Landers thought to himself as he stood roughly 60 yards away from the hog. Pulling back on the bolt as slowly and quietly as he possibly could, he tried to sneak one in the chamber, but when he took aim and pulled the trigger, all he heard was a click. When he racked a new round in, the massive hog busted him. The pig took off, running down into a creek bottom and out of sight.

“I knew he wasn’t gonna go far, so I said screw it. I’ll wait and let him calm down for a couple days,” Landers says. He already had a plan in mind. He just needed reinforcements.

By Thursday, Landers had recruited two of his friends, Nathan Stringer and Ryan Nichols, and the three of them headed back to the farmer’s field that evening. They arrived about 30 minutes before sundown and saw the same pig that Landers had spooked off two nights before. The boar was standing out in the open, chowing down on corn, so the hunters bided their time and waited for darkness to fall.

Read Next: Texas Deer Hunter Gets Tossed by a 300-Pound Wild Boar, Shoots It from 5 Feet Away

“This pig was spooky, and he was smart,” Landers says. “We stayed and watched him work across the field, but then a deer came walking down the tree line. The pig saw the deer and peeled out of there, running off into the woods again.”

Well after 9 p.m., the three returned to the field when it was pitch black. Scanning with thermal scopes, they walked into the field and quickly spotted the big hog again.

“He was working his way to the upwind side, so we knew he wasn’t gonna smell or hear us,” Landers explains. “When they’re eating corn like that, they’re making so much noise chomping and chewing that they’re not even paying attention.”

The pig was still oblivious as Landers and his two buddies crept within shooting range. Steadying his rifle on the shooting sticks, Landers told them to follow up on his shot as soon as he fired.

Walking up on the dead boar, the three hunters couldn’t believe how big he was. They’d killed big hogs before—up to 300 pounds by Landers’ estimations—but this was easily the biggest one any of them had ever seen in person. After struggling to lift the pig onto the tailgate of Landers’ pickup, they headed for his dad’s garage, where he kept a fine-tuned scale that he used to weigh racecars. Putting the hog on the scale, it registered 352 pounds.

“We really couldn’t believe it. The farmer was blown away too,” Landers says. “350 pounds might not sound that crazy for a pig, but they rarely reach 300 pounds up here. It’s kind of like a 200-inch whitetail. It takes a lot for a pig to grow to that size—especially with all the rednecks down here in Texas—and they don’t get that big without being smart.”

Landers says he plans to get a Euro mount of the boar’s skull. And you better believe he’ll be reaching out to more farmers in the county before harvest season is done.