Does Your Dog Need a Bath?

My Labrador retriever has had exactly one bath in his entire six years of life. I have never bathed him.... 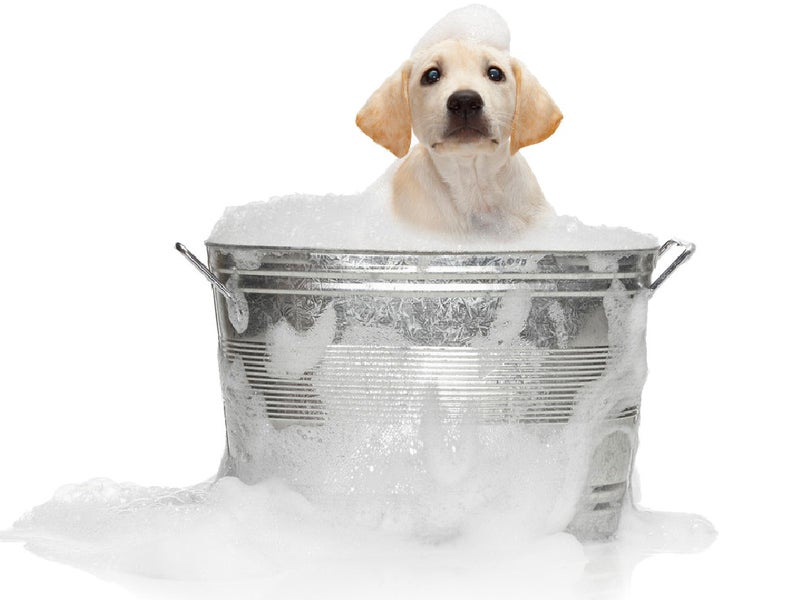 My Labrador retriever has had exactly one bath in his entire six years of life. I have never bathed him. The singular act of adding a Lab to water while inside a house was attempted once, by my wife, when I wasn’t home and when Kona was about three months old. It was an act that has never been repeated.

I didn’t mind that she tried to clean the pup up. He, of course, wanted to get into the tub with the bulldog (who used to get regular baths, but has had to make due with his own odor since our son was born). My wife logically thought it would be a good idea to clean both pups at the same time. However, she didn’t account for a Labrador’s love of water. To hear her tell it, Kona was Satan incarnate.

Besides possibly being a bit of a chore, it might not be a great idea to bathe your hunting dog…especially if he’s a duck dog.

While we don’t want a stinky mutt curling up on the couch or camping on the bed with us, bathing a waterfowl dog should be an act undertaken with aforethought.

You see, waterfowl-hunting dogs like Labradors and Chesapeakes excrete special oils that help protect them from cold water. You can often feel these oils on your hand after petting one (especially Chessies). The oils work in unison with the double-layer coat of the dogs and help them repel icy water and to dry quicker.

If you bathe these dogs too much, or too close to a waterfowl hunt where the dog is expected to make cold-water retrieves, you’re robbing him of a defense against the cold. Give the dog plenty of time to “re-oil” themselves after a bath and before a hunt. I don’t know if there’s a specific amount of time it takes a dog to rebuild their oil, but I wouldn’t bathe one within a week of a cold-water hunt. That’s just a stab in the dark; it may or may not take that long, but when it comes to helping my pup fight the cold I try to give him every advantage possible (acclimation, neoprene vest, dry spot to sit, toweled off between flights, etc).

As I said, Kona has had one bath in his entire life, and he’s been in some nasty cow ponds during training or just while out hiking or hunting. Most smells usually disappear shortly after he dries. If he’s been in some really nasty water, I will hose him down when I get home and that usually takes care of any problems. There are a few other things you can do:

*I remember this tip from a book when I was a kid. It was called a “dry bath” or something similar. You rub the dog down with corn starch (or was it corn meal?) and then brush it out of the dog’s fur. Supposedly, it absorbs the odor without the mess of a bath (although I think having a bunch of corn starch on the floor would be at least as bad as a bath…).

*This site also has a good quick tip on using a squirt bottle to simultaneously wet and soap a dog; saving you a step in the whole dog-washing process and supposedly making rinsing easier.

*Waterless dog bath foam looks interesting. I have never used this but the premise looks good and might just be what many of us need. Instead of wetting, shampooing and rinsing a dog, you simply massage the foam into the coat, let dry and then give a quick brushing. It seems like it might be a good way to eliminate odors (like from mucky cow ponds…) quickly without too much hassle. Has anyone ever used this product? If so, how did it work?

What other methods have you used to give your dog a quick and easy bath to remove odors or filth so that you and the pup aren’t in the dog house with the wife? For that matter, how often do you give your pooch a bath?