How to Catch Fish with Drones? 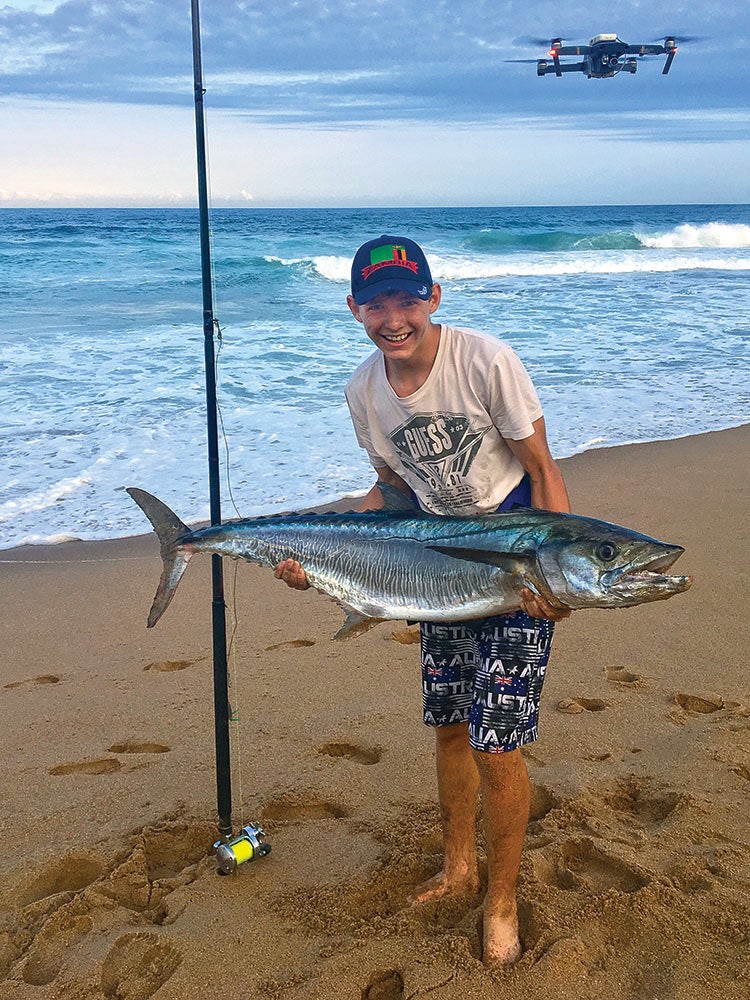 Lyon Venter with a surf-caught mackerel taken with the help of a drone-deployed bait. Jacques Venter
SHARE

Brandon Jones knew sharks were finning in his waters just off the coast of Jacksonville, Fla. They were, however, a cast too far and he had no clue as to how he could reach them from the beach.

“After years of shark fishing with a kayak and fighting through the surf, I knew there had to be a better way,” says Jones. “That’s when it hit me—a bolt out of the blue. A drone! I did a little research online, bought my first quality drone, and began learning to fly it. It didn’t take long before I was able to control it enough to hover 30 feet above the waves and, with the camera, look down at my dangling bait.”

When I spotted a shark, I dropped the bait. Within seconds, the drag was screaming and the sand-spiked fishing pole was going mad. Just 10 minutes later, a 60-pound blacktip shark lay on the beach.”

Jones’ story took me back 15 years. On a full-moon summer night, I, too, was trying to figure out how to drop baits into the shark zone out beyond the first breakers. I hopped on my surfboard, a live bunker clenched between my teeth, and paddled off into the night. About 300 yards out, I heard a splash, followed by what sounded like an explosion. The monstrous 5-foot tail of a thresher shark slapped the water at face level. I spit out the bunker and paddled as fast as I could back to shore. That was the last time I attempted that method of bait deployment. I went on to test others, including three-man slingshots, modified potato cannons, and remote-controlled model boats—all with limited success. My kingdom for a drone.

Indeed, the drone revolution is breaking barriers on a plethora of levels, from the battlefield to pizza delivery to fishing. But before you indignantly huff off, wondering what the heck the angling world has come to, consider a few more fishing stories.

Who Needs a Boat?

Jacques Venter of South Africa, inventor and designer of the Gannet bait-release system for drones , was frustrated. For years, he had seen large sharks swimming beyond the first set of breaking waves but could never get baits out far enough to tangle with them.

“I gave up casting from the beach for sharks,” he says. “The sandbars stretch for at least 200 yards, and all I ever caught were small sand sharks.”

Venter’s first success came while he was sitting in a lawn chair on his back deck, which overlooks the ocean.

“We set up a line with a live bonito for my son Lyon,” he says. “We flew the drone out about 300 yards—100 yards past the outer sandbar—and sat back. Lyon’s reel started to scream, and we knew it was something good. The fish pulled hard and ran fast. It was a monster king mackerel that weighed 61 pounds. Now, every single time we use the drone, we are on something that gives us a decent fight. From the beach or cliffs, it is a whole new ball game now. We catch fish that were previously reserved only for the guys on boats.”

Then there’s the one about Jaiden MacLean. The young Australian, whose insane YouTube video has garnered more than 3 million views, first utilized his drone to spy a school of longtail tuna off Fingal Beach in New South Wales, Australia.

“We first flew the drone 350 meters [1,200 feet] away and spotted schools of longfins,” he says. “Then we dropped an octopus bait in front of the moving fish. After the bait sat in the water for a bit, with tuna inspecting it, one of the fish jumped it. It was an awesome hookup.”

Since his first successful battle, MacLean has taken giant trevally, cobia, and snapper, and had one unforgettable fight with a coral trout.

“Last year I went on a trip to the Coral Sea, 350 nautical miles off the coast of Cairns, in search of new species to land using a drone,” MacLean says. “I spotted these massive trout in the shallows around this island, but they were very wary. We dropped a bait in from above, so as to not to spook the fish, and hooked a 44-pounder. We proved that spooky reef fish can successfully be caught from a drone. It’s so interesting watching fish act naturally and seeing how they ambush prey without the interference of boat motor noise or terminal tackle in the water.”

Next on the horizon for MacLean is to launch his personally designed drone fishing clip and start a charter service to help people with disabilities, allowing them to catch a fish of a lifetime from the beach.

Drone fishing isn’t just for shore-based anglers. While many boaters use drones for reconnaissance—to spot bait activity or to get a bird’s-eye view to explore an area of interest—Chris Marion of Aguadrone expounds even more ways to utilize drones for boating anglers.

“One of our testers in Florida uses our Aguadrone attachments when kite-fishing for sails or king mackerel,” says Marion. “The kite is at the mercy of the wind, and when the wind is dead, the drone is deployed with the bait clip. This allows us to hover and then drop the bait in from above to achieve the same results as a kite.”

Rig It To Win it

Of course, the first step is to buy a drone. They are not cheap—the Phantom 3 or 4 will set you back at least $1,500, while the Mavic Pro costs about $800. Aquadrone’s all-inclusive fishing drone, which features interchangeable pods that clip on and off for bait-releasing capability, is generally available for about $650. Bait-release rigs are an added expense. Gannet, for example, has specially designed bait-release rigs ($159) for the most popular drones.

Woodsmanship Basics: 10 Things Technology Won’t Do For You

You can also try this DIY bait-release rig: First, tie 4 inches of 65-pound braided line off the bottom of each of the four drone rotor hubs. Next, attach a caribiner to each, along with 24 inches of 65-pound braided line tied to a snap swivel. Finally, tie a 12-inch section of 80-pound monofilament to an offshore flatline clip—the weight-bearing release can be adjusted, depending on the weight of the bait you are flying out. You can either anchor the rod in a sand spike on shore or a rod holder if you’re on a boat. Let the line pay out until you reach your release target and engage the reel.

Flying a drone is no more difficult than playing a kid’s video game, but it will take some practice. Take-offs and landings are a learned skill that will take you a couple of hours to master. a fresh approach

It can be argued that saltwater-­based anglers are at the fore­front of fishing ingenuity, but freshwater drone-fishing applications abound, too.

“Everybody wants to fish places that are impossible to access on foot,” says Marion. “Our guys have flown baits on long leads over the spillways, for example. If you can ensure catching small fish, you can fish it directly from the drone and extract your catch. But you do risk losing an expensive piece of equipment. Drones, too, have been used to fly out and disperse chum in an area to get a bite going before a cast is made.”