Alabama Slammin’: How to Fish the Gulf on a Budget

Do-it-yourself options for fishing the Gulf 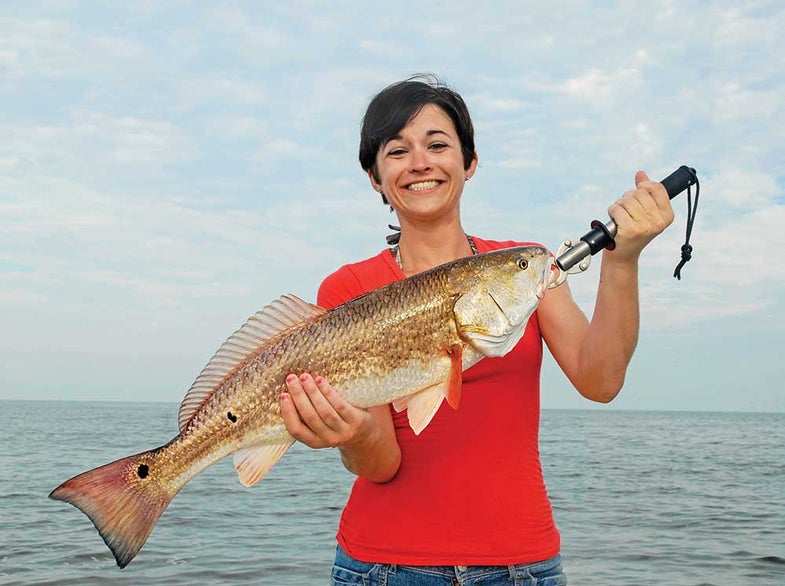 Midmorning under a cloudless sky, and Denise, who politely declined to give her last name, was 1,000 feet out and 20 feet above the Gulf of Mexico cleaning a saltwater catfish. Her boyfriend, Monte, thin as a Popsicle stick, was reeling up a bare hook.

“Felt like a mackerel,” he said. “First time I fished here I caught a cobia.” He checked his rig and re-baited with a thumb-size chunk of cut bait.

Denise, Monte, and 10 dozen or so other fishermen were scattered along the Gulf State Park fishing pier—a concrete and wooden monstrosity that juts 1,540 feet into the Gulf from the spit of sand that separates Gulf Shores, Alabama, from neighboring Orange Beach. The pier—and the surf—attracts a community of sorts: locals, vacationers, seasonal regulars. But all are do-it-yourselfers, fishermen who don’t need or want a guide or boat but who love to fish the salt. A few, like me, were first-time visitors wielding rented rods. But many were experienced regulars, generous with advice.

Pier Pressure
The current pier opened in 2009, replacing the 825-foot wood structure that had served fishermen since 1968. It had survived a beating by Hurricane Frederic in 1979 but was reduced to splinters by Ivan in 1994. The new one is designed to withstand triple-digit winds, but it has yet to be tested.

If there is any doubt that this place favors fishermen, just read the off-limits list. No pets, bed rolls, cots, sleeping bags, skating, skateboards, bicycles, running, horseplay, beach umbrellas, or lounge chairs. Cast nets, gill nets, spears, spear guns, wire crab traps, and firearms are off limits, too. There are a few amenities available, including restrooms and a snack bar.

The pier is open 24 hours, but late-nighters should arrive fully prepared. The bait-and-tackle shop runs from 6 a.m. to 6 p.m. The gate booth is manned from 6 a.m. to 11 p.m. Third-shift anglers pay via an honor box. The pier access fee ranges from $9 daily to $321 annually.

What you might catch depends on varying factors, not the least of which is water temperature. But flounder, sheepshead, pompano, mackerel (Spanish and king), speckled trout, whiting, croaker, and catfish are regularly on the menu, though rarely at the same time. The baitfish generally show up (and fishing improves) when water temperatures approach 70 degrees.

Shore Bets
Gulf Shores and Orange Beach are surrounded by water. The pier is the destination for most DIY anglers, but other options abound:

▶ The Surf: “We have excellent surf-fishing here,” says Stephen Lee, owner of Intercostal Safaris, which offers inshore and offshore fishing, duck hunts, a two-day fishing school, and saltwater bowfishing. “You can catch sharks off the beach. You can catch whiting off the beach. A lot of things.”

▶ Inshore/Coastal via Kayak: The summer season arrives with a plethora of recreational paddlers, but not many kayak anglers. This is a mystery to Lee, particularly with miles of kayak-accessible waters, including the shallow, grassy flats that surround Oro Island. “Kayak fishing is not something that’s really taken off around here just yet,” he says. “But we certainly have an excellent fishery for it.”

▶ Lake Shelby: Like the pier, Lake Shelby is part of the Gulf State Park, and the 600-acre lake offers anglers a mostly freshwater option.
“If you’re on the bank, most of what you’re going to catch is catfish and bream,” says park naturalist Kelly Reetz. “But if you’re in a boat, you can get to redfish and speckled trout. And you can catch a lot of bass—if you get in the right area.”

▶ Charters: Gulf Shores and Orange Beach are home to nearly as many fishing charters as rentable condo units. One is Reel Surprise Charters, which provides full-service inshore and offshore trips.

“Everything from a three-hour trolling trip to a 36-hour trip,” says Susan Boggs, who, with her husband, Capt. Randy Boggs, owns and operates Reel Surprise.

And for the DIY angling crowd?

“My advice for that would be to go to the state park pier,” she says.

Denise and Monte would agree.