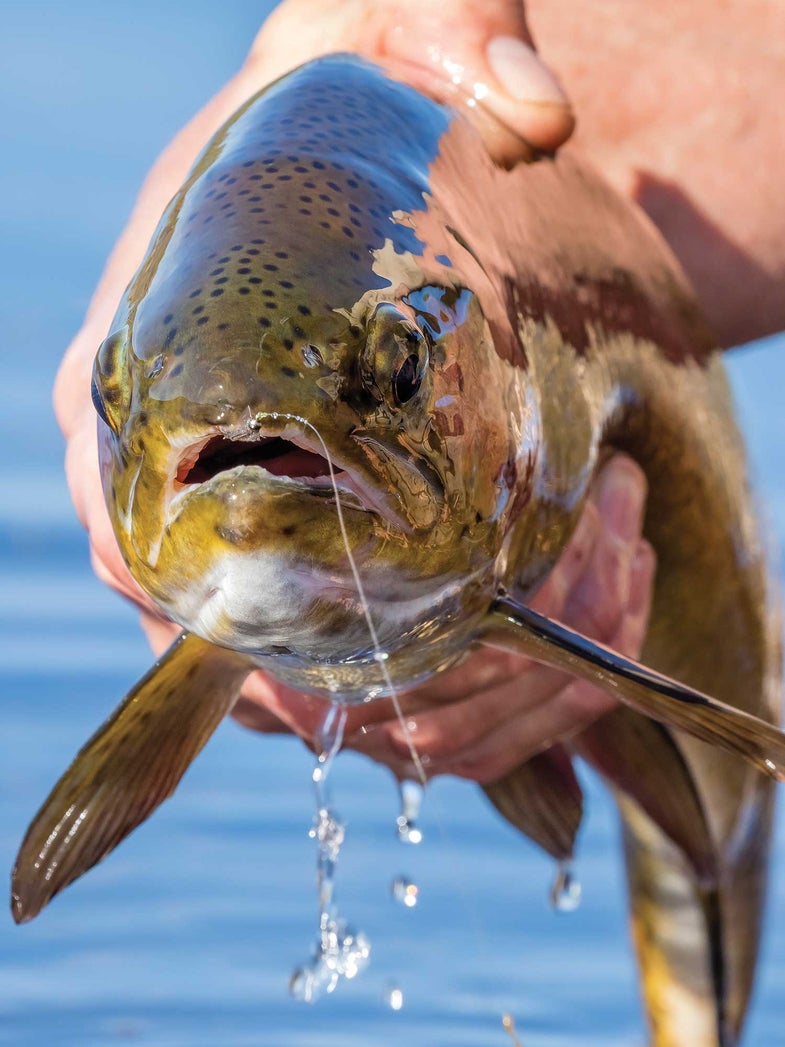 A rainbow caught on the fly. Lon Lauber
SHARE

Don’t look now, but school is about to let out, and as the calendar ticks toward the first unofficial weekend of summer, all fishermen need a plan for Memorial Day and beyond. Don’t have one? Don’t panic. Whether you’re looking to take a fishing vacation with the family or go on a weekend adventure with a bunch of buddies, we’ve vetted some awesome fisheries that might be a tad hard to get to, but are worth the effort. The reward is simple: fish-filled days.

Once named America’s Top beach by Trip Advisor, Fort De Soto Park attracts millions of visitors each year. But it’s much more than just another Florida beach. According to Jose Chavez, who has camped at Fort De Soto and fished this property for more than 15 years, the flats surrounding the park are loaded with redfish, trout, and snook during May and June. Besides an incredible flats fishery, there are also full-service and primitive camping opportunities.

Because of the park’s size—it’s the largest within Pinellas County—anglers will find plenty of grass flats to probe in the waters that cut through these islands, including Mullet Key Bayou and Bunces Pass. However, Chavez warns anglers not to overlook several quality flats to the east along Jackass Key and Conception Key.

Anglers can set up base camp in two different locations. For those looking for a real adventure, Shell Key has primitive sites available. You can only reach them by boat, and you have to bring your own privy, water, and supplies. Currents can be strong, so traveling to and from Shell Island via kayak or canoe is not recommended. However, once you’re there, you can probe the surrounding flats with a smaller craft, such as a kayak.

An option for overnighters is to stay at the full-service, 243-site campground in Fort De Soto, located on St. Christopher Key. There is a boat ramp just north of the campground on Madelaine Key that can be used to launch small boats. This ramp can also be used to launch excursions to Shell Key. Kayaks and canoes are also available for rental on the southern tip of Mullet Key.

Reservations can be made online or by calling 727-582-2267 up to six months ahead of arrival. A free permit is also available online.

American Electric Power ReCreation Land, located in southeastern Ohio, is a good-news angling conservation story. This recreation area was built on 60,000 acres of land that had once been strip-mined. Today, anglers can enjoy the reclaimed wilderness, which includes 350 lakes and ponds and 380 campsites.

According to Matt Hangsleben, who has fished the AEP ponds for the past five years, you can explore these waters for many seasons and still never cover all of them.

Most of the lakes support healthy populations of bluegills, redear sunfish, and largemouth bass. Bass densities are high in most of the waters, and in 2013, the Ohio Division of Wildlife instituted a 14- to 20-inch slot limit. Anglers are allowed to keep two fish under 14 inches and one fish over 20 inches. While bass in the 6- to 7-pound range are not uncommon, the goal of the slot limit is to recruit even more quality fish. Bluegills in the 8- to 10-inch range can also be found at many of the ponds.

Ponds average 2 acres in size, however there are several larger waters ranging from 5 to 25 acres. The largest tops 37 acres. Several small roads intersect the entire region. Some of the waters can be found just off these roads, while others are more remote, requiring 45 minutes or more to reach by foot.

“Google Maps can be a really good tool for finding lakes that are not visible from the roads because of the hilly terrain and dense understory,” says Hangsleben. “Sometimes you will discover hidden lakes that you can’t see while driving by them.”

By May and June, shoreline vegetation can be thick, making canoes, kayaks, and belly boats the best way to navigate.

Maps of the ReCreation Lands showing the ponds and lakes, intersecting roads, and campsites are available online, at the District Four office of the Ohio Division of Wildlife (360 E. State Street, Athens, OH 45701), or by calling 740-589-9930.

3. Shark Trek on a Texas Beach

Trucks, beach camping, kayaks, and shark fishing are the makings of an adventure we could not leave off our list. Fortunately Richard Woehl, a South Padre veteran, could provide the scoop.

“We had always heard about this place called PINS, which stands for Padre Island National Seashore,” says Woehl. “Everyone talked about this incredible fishery.” Spanning some 60 miles, Padre Island National Seashore is the largest undeveloped barrier island in the world. Located just south of Corpus Christi, Tex., the island has one road that provides access to the north side. From this entrance point, access is limited to four-wheel-drive vehicles.

Woehl has fished from mile marker 0 to 60, and recommends the stretch from Big Shell Beach (mile markers 23 to 25) down to mile marker 60.

“Traveling out there is part of the adventure,” he says. “I’m running 4,000 to 5,000 rpms—through loose sand—just to navigate portions of the beach.”

Woehl suggests making the trek with multiple vehicles, tow ropes, flat fixes, shelter, anchors for your shelter, first-aid kits, lots of ice, and coolers to keep the ice cold for several days. Kayaks are also necessary to get the bait to deeper water.

After arriving, the first order of business is to set up camp and catch baitfish. Cast nets work well in the pools between the beach and the first sandbars. Mullet and ladyfish are the best bait.

Next, set your rod holders and start running bait to the deeper water. Woehl’s group usually spaces their rods about 20 to 25 yards apart. He employs a three-way rig utilizing three 5-foot, 150- to 200-pound plastic-coated steel leaders. One end terminates with a large circle hook and the other features a spider weight. The third is tied to a second inline swivel so that the main line can be tied to the rig. Using kayaks, they paddle the bait 300 to 400 yards out beyond the third sandbar. Besides sharks, you can expect to pick up kingfish and bull reds when you fish the gulf side in May and June.

You can plan your visit by checking out the park online.

4. Somewhere Over the Rainbows

Discovering a world-class rainbow trout fishery doesn’t always require backpacks and canoes. Sometimes you just have to be willing to drive farther or take alternate routes. Washington State’s Ross Lake—which can only be reached via a gravel road from Hope, British Columbia, or by traversing Diablo Lake—falls into this category.

After making the long trek to this wild and remote lake along the United States and Canada border, anglers will find more than just big rainbows. The lake also yields quality brookies and cutthroats.

While the southern edge of 23-mile-long Ross Lake is visible from State Route 20, you can’t get to the water from the highway. Boat access is limited to ramps along the northern shores at the Hozomeen Campground. These ramps are usable from mid-June through September. The campgrounds can be reached by following a gravel road approximately two hours south from Hope. Once you arrive at Ross Lake, there are 19 boat-in sites available.

Diablo Lake is the southern gateway to Ross Lake; however, there are several options for adventurers coming through this entrance. The first is to launch portable craft, such as canoes or kayaks, at Colonial Creek Campground. From here you have a 5-mile paddle across Diablo Lake and then a 1-mile portage into Ross Lake, where you can make use of the boat-in camping sites for your stay.

If you do not have your own boat but would still like the do-it-yourself experience, you can rent equipment, including canoes and kayaks, from Ross Lake Resort. To reach the resort, catch a ride on the water taxi, operated by Seattle Power and Light, across Diablo Lake. The water taxi can be accessed via Diablo Dam Road between mile markers 127 and 128. The resort will then pick you up at the end of Diablo Lake and take you across the portage to Ross Lake. A third option is to stay on the resort property. Will Shields, a Ross Lake fishing veteran, recommends packing minnow imitations.

“We all use sinking fly lines because we are trolling the shoreline with streamers, Clousers, and Woolly Buggers,” says Shields. “The trout are feeding on redside shiners.” Trolling with flyfishing equipment may not seem natural, but the key is getting the fly to the right depth.

WHERE: Land Between the Lakes, Kentucky and Tennessee
TARGET: Bass, crappies, bluegills, and catfish
INTEL: Kentucky and Barkley lakes’ fisheries are well known to most anglers, but the real tip is knowing how to enjoy these gems away from the crowds. Stay for a week at one of the 12 backcountry campsites (Birmingham Ferry, Boswell Landing, Demumbers Bay, Ginger Bay, Neville Bay, Nickell Branch, Pisgah Point, Redd Hollow, Smith Bay, Sugar Bay, Taylor Bay, and Twin Lakes), which all have a boat ramp. Or really disappear at one of the backcountry sites located along the trails that wind through the area. More camping information can be found at lbl.org.

WHERE: Western Lake Erie (South Bass Island State Park)
TARGET: Smallmouth bass and walleyes
INTEL: As the heat takes hold, smallmouths will transition from spawning patterns to summer patterns. They could be in 8 to 10 feet of water or on structure 20 to 30 feet deep. Walleyes will be in the deeper holes off the islands. You can camp right on South Bass Island instead of making the long run every day from a mainland base camp. For more about camping here, go to parks.ohiodnr.gov.

WHERE: Golden Trout Wilderness, California
TARGET: Golden trout
INTEL: Made up of 304,000 acres, hundreds of miles of trails, 400 lakes, and 1,100 miles of streams, this wilderness area is loaded with opportunities to tangle with golden trout. Try larger dry-fly patterns to target bigger fish. Pheasant tail nymphs fished on the bottom are a great choice. Check out wilderness.net.