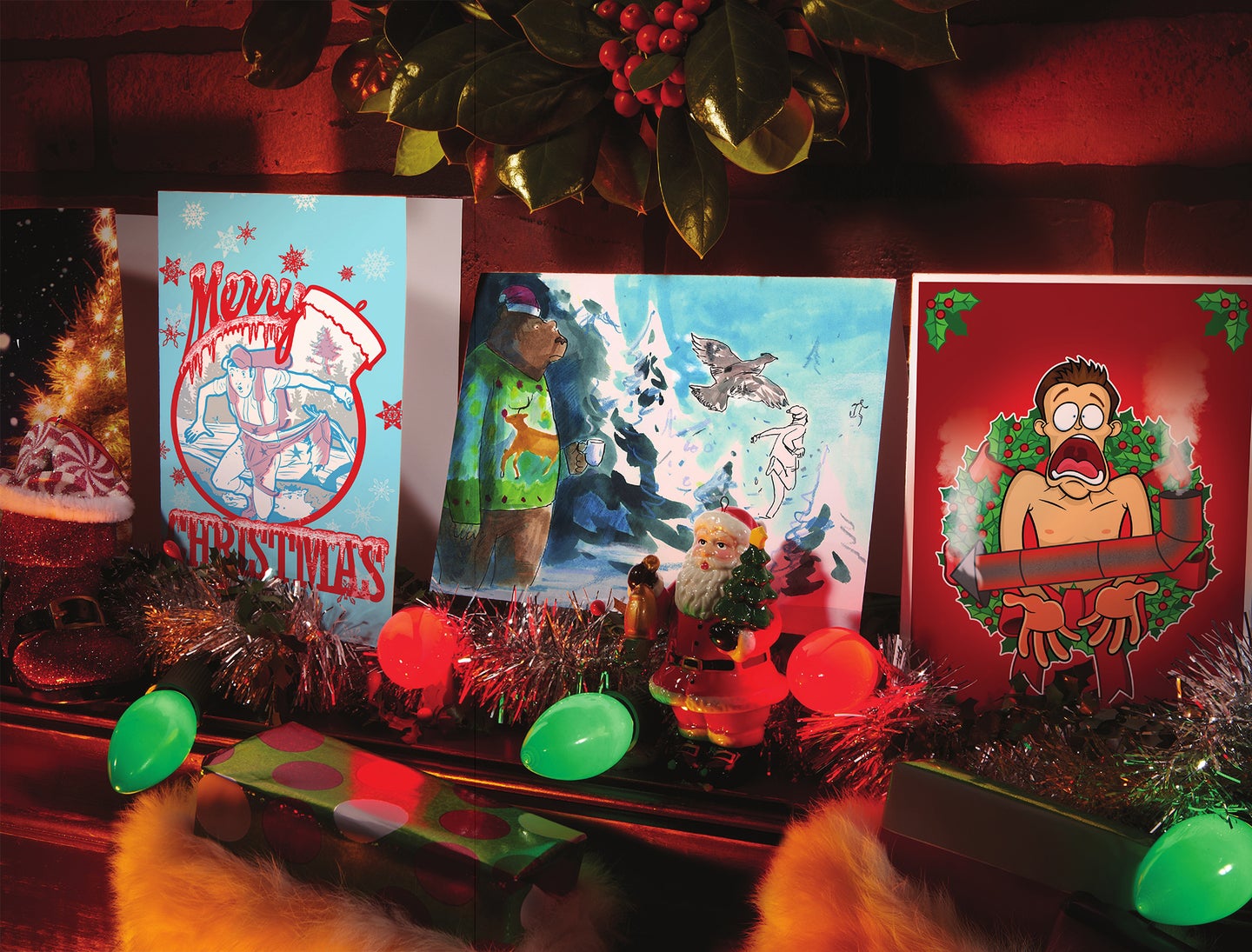 The Perfect Holiday Cards for Your Hunting Buddies, According to McManus

Sending Christmas cards to old fishing and ­hunting buddies is a staple of the season. These cards capture certain moments they’d probably rather forget

LATELY I’ve been regretting that I didn’t snap photos of certain expressions on the faces of my friends over our many years of camping, hunting, and fishing together. I’d like to put those photos on Christmas cards to mail to them. Oh, what a kick they would get out of those special moments, captured for posterity!

The three of us other campers never snickered or smiled or in any other way let on that we noticed the shorts. It wasn’t that we were being polite, only cautious—that’s how tough Richie was. The only reason I am writing about the shorts now is that Richie lives on the East Coast, and I live out West. He would have to get on a plane or a bus at considerable time and expense to travel out here to beat me up.

We were working our way down the trail when we came across a fallen tree. Three of us made it over without any trouble, but Richie decided to jump it. Almost as soon as he became air­borne, the shorts hooked on a snag and exploded! A dozen or so pieces of black wool, each no bigger than a playing card, drifted to the ground. Now, if you happen to be someone who collects weird expressions, you can’t do better than the face of a person whose shorts have just exploded in midair.

Richie stood there in a state of shock and semi-nakedness, staring down at the remains of his former attire. After we finished squealing with delight, we came to Richie’s rescue. We straightened the shank of a fishhook and used it as a needle to sew all the patches into a rather attractive skirt, something a Scottish soldier might feel quite comfortable wearing, perhaps even while marching into battle. You could almost hear the bagpipes over our laughter as Richie strutted off down the trail.

A couple of years later, on a hiking trip in the mountains, my friend Lenny came up with another expression I wish I had recorded. We had just come across some fresh grizzly tracks on the trail. They were so fresh, in fact, that the edges of the tracks were still falling in on themselves. Let me disclose here that I have never been fond of grizzlies, but as a teenager, I was terrified of them.

The group of us got to our knees to examine the tracks close-up. There was a narrow band of brush and trees between us and a lake just off the trail, and I figured the bear had to be in that narrow cover. So I hissed at Lenny, “We’ve got to get out of here, fast!”

In his infuriatingly calm fashion, Lenny said, “Pat, you’re always so jumpy. You don’t have to be so worried by grizzlies. They’re more afraid of us than we are of them.”

Suddenly a grouse exploded out of a bush directly behind him.

Oh, how I would love to paste a photo of Lenny’s expression on a Christmas card and send it to him. I don’t know who would have taken the picture, though—I myself was 50 yards down the trail by the time the shutter would have closed.

On an excursion into the high Rocky Mountains when the four of us were all teenagers, Kenny, Vern, Normy, and I were caught in a summer blizzard. We were all wearing tennis shoes and dressed for June weather. Wet, cold, and ready to give up in despair, we came upon a tiny cabin built by some fur trapper a century before. We evicted a dead porcupine and moved in to ride out the storm.

The cabin had a tiny stove with a rusty metal chimney that rose up—almost—to a hole that had been cut for it in the roof. We figured that the 10-inch gap between stovepipe and ceiling would still be able to draft smoke. So we collected a supply of firewood, piling it in a foot-high row between the stove and a wall. It made a nice low bench for us to sit on and absorb the welcome heat.

Kenny and I soon tired of being trapped in the cabin, so we hiked up to Harrison Lake, our intended destination. We returned soaking wet and freezing, stripped off our clothes down to our shorts, and plopped onto the bench of firewood next to the stove.

As we sat there, I noticed that the metal chimney was now white-hot and sort of trembling with the drafting heat and smoke. That’s when I saw Normy, posed like a basketball guard preparing to make a shot from beyond the arc. In his hand was a peeled hardboiled egg. I glanced up to detect the “basket.” It was the open end of the white-hot stovepipe! I tried to shout at Normy, but the urgency of getting up off our woodpile totally preoccupied my mind.

Norm shot. The egg stuck, sizzling, on the edge of the stovepipe, which toppled toward my bare legs. I caught it and juggled it in my hands before passing it to Kenny. He tossed it back, just as quickly. I threw the pipe down on the dirt floor. Shortly thereafter, I heard Normy screaming as the near-naked Kenny chased him through the blizzard up the side of a mountain.

Caught! The expression on the face of a near-naked person who has just been handed a white-hot stovepipe.

On a hunt a couple of weeks before Christmas some years later, I had spent all morning wading in snow up to my knees following a dozen deer trails, none with a deer at the end. I was exhausted. I headed back to my pickup, which was parked on the edge of a mountain road, to meet up with two of my friends. As I trudged down the mountain, I came upon a beautiful little Christmas tree. “Perfect!” I said to myself. “Maybe I’ll go home without a deer, but at least I’ll go home with a Christmas tree.”

I continued on down to my truck, got my little bow saw out from behind the seat, hiked back up the mountain, and sawed down the tree. I then hauled it down to the road and stuck it upright in a snowy bank across from the truck. Already a plan was taking shape in my mind. I carefully erased all tracks leading to and from the tree.

Presently, my friends showed up, both of them having seen a thousand tracks but none with deer standing in them. I said, “The same with me. But I just noticed that little spruce over there. It would make perfect Christmas tree. I think I’ll take it home with me.”

Orvie said, “Yeah, great idea. You got something to cut it down with?”

“As soon as I get my tree,” I said. I slogged over to the spruce, grabbed it, and pretended to be straining mightily in an effort to rip it out of the snow and ground. Right on cue, as was his habit of telling me things I couldn’t do, Orvie said, “You’re crazy, Pat! You can’t just pull a tree out of the ground like that!”

At that instant I popped the tree up out of the snow.

If only a camera had been focused on Orvie, I would at this very minute be pasting the photo of his expression on a Christmas card to mail to him. After all, what better way to enjoy this season than to reach out to those friends who have shared such memorable outdoors experiences? I’m sure they’d love to hear from me.