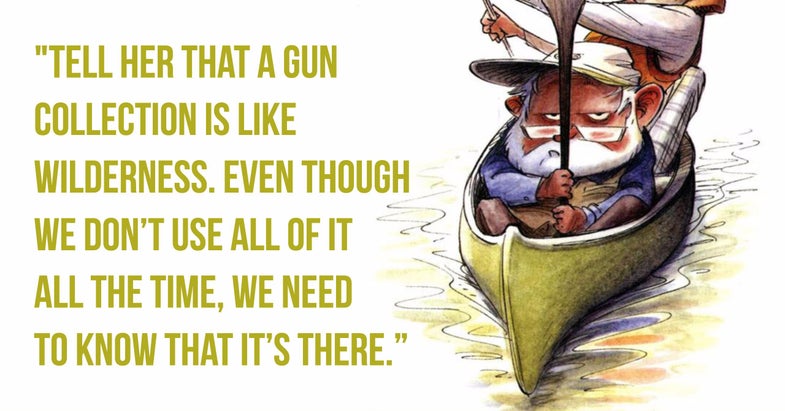 Although not exactly known for his prowess as an outdoorsman, Patrick F. McManus is the genius behind some of the best yarns ever to appear in the pages—specifically the back page—of Outdoor Life. These 17 quotes were pulled from “Last Laugh,” his regular column in the 1980s, ’90s, and ’00s. As good as a McManus story is from the first word to the last, the questionable advice, nuggets of wisdom, and pithy one-liners pulled from them still shine even when taken out of context. Here’s a look at the highlights from some of our favorite columns.

1. “I always figured the reason God invented skin was so people like me wouldn’t have to look at innards.” —Blood Sausage, January 1990

3. “Avid hunting is a popular sport. There are probably more avid hunters than all the deer and elk hunters combined.” —Hunting the Wily Avid, May 1995

4. “Most of my exercise has come from strenuously avoiding all forms of physical fitness, although I do find it amusing to run the Jane Fonda Workout cassette at fast speed on the VCR.” —”The MFFFF, November 1986

5. “I have practiced ignorance most of my life and am intimately familiar with all its variations and applications…Let us now apply ignorance to fly-fishing. Suppose your flyfishing is like mine—no offense intended—and your main objective is somehow to get a fly to plop on the water in the hope that nearby there’s a fish lacking in matters of style and taste.” —Ignoramus, October 1997

6. “There was one angler who believed that if you can’t do a thing right, you shouldn’t do it at all. A strict adherent to this philosophy, he hadn’t been fishing once in the past 37 years.” —I’ll Get to It Someday, June 1982

7. “Give a man enough rope and it still will come out 6 inches too short. That is the nature of rope, if not the nature of man.” —”Tying One On,” September 1987

8. “An elk that is shot dead within 15 feet of your hunting vehicle will still pull himself together enough to gallop to the very bottom of the steepest canyon within five miles. This is known as ‘elk’s revenge.'” —Share and Share Alike, October 1982

9. “Poking at a campfire with a stick is one of life’s great satisfactions.” —Of Fire and the Night, September 1999

10. “Back when I was a kid, parents never cluttered up a youngster’s mind with explanations.” —The Complete Curmudgeon, February 1993

11. “Before committing yourself to a hunt with any new acquaintance, you should first take him on an overnight camping trip, one of the very best of all psychological tests.” —Flaws, September 1984

12. “It is best not to use a sleeping bag on your first attempt to sleep outside alone in the dark. Sleeping bags are not made for running.” —Risk Assessment, April 2009

13. “In my own defense, I have nothing against standards. Years ago I’d even possessed one myself. It was not a high standard by any means, but rather a low one, so low in fact I was forever tripping over the blasted thing. So I got rid of it.” —A Lady of Standards, April 2001

14. “No one had ever told Harold about the relationship between a man and his wife and his boats. I decided the duty had fallen to me.” —Wet Behind the Ears, February 1989

15. “He grouped his last five shots right in the center of the bull’s-eye. Then I showed him my technique of scattering shots randomly around the target because, as I explained, you never know which way the deer might jump just as you pull the trigger.” —The Hunting Lesson, February 1983

16. “Tell her that a gun collection is like wilderness. Even though we don’t use all of it all the time, we need to know that it’s there.” —Gunrunning…Past Your Wife, September 1985

17. “It is well-known that a hunter’s mind usually surrenders to hardship before his body. The trick is to have the mind and body collapse simultaneously, which is the purpose of these exercises.” —The Hunter’s Workout Guide, May 1982