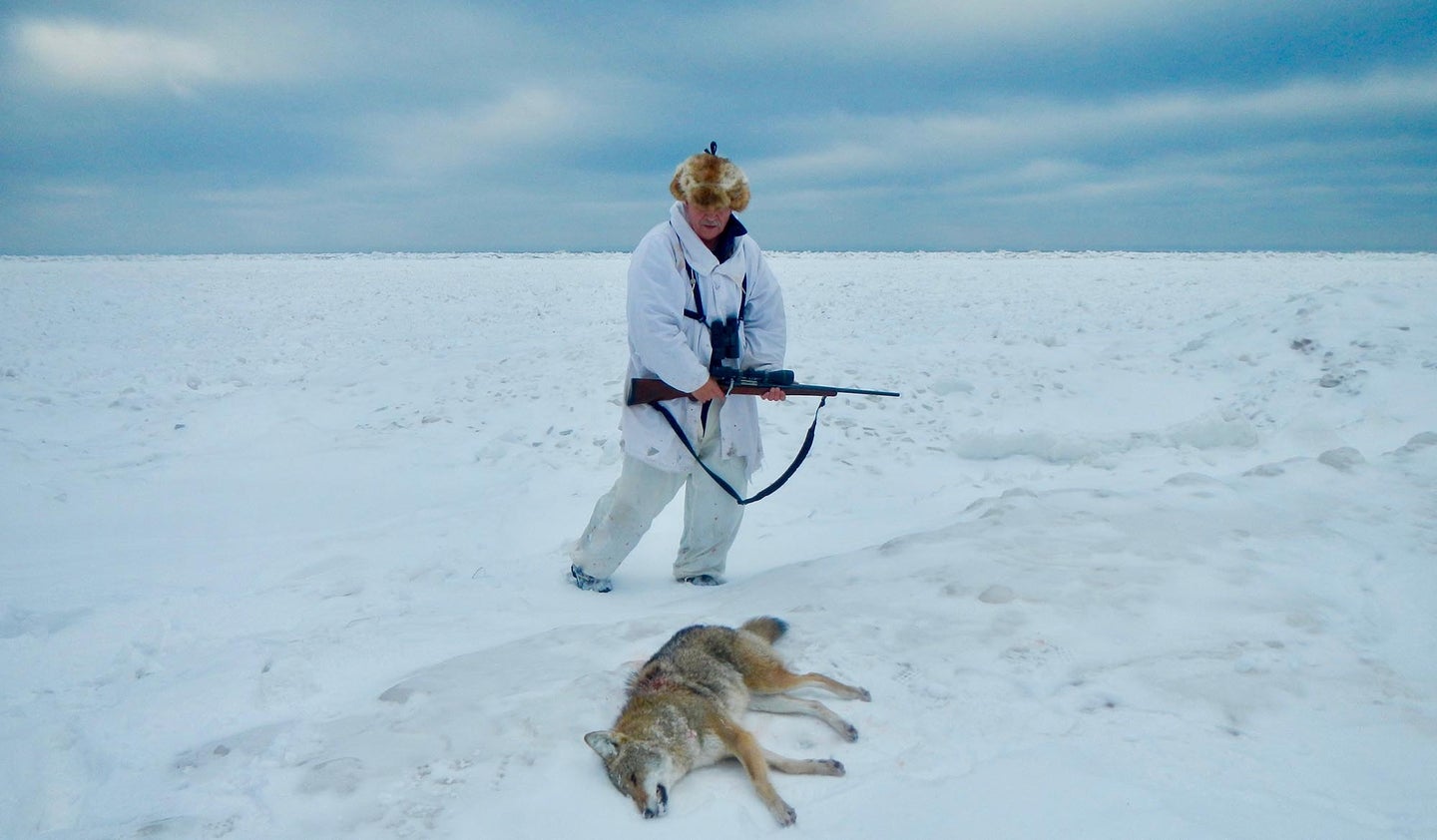 The author after a successful hunt on Lake Superior. David Zeug
SHARE

From a bluff along the edge of Wisconsin’s north shore, I watched a January sun rise over Lake Superior. Even with temperatures near zero, steaming seams of open water, maybe running all the way to Canada, were visible between islands of ice. To the west, pressure ridges of ice rose from the lake all the way north to Minnesota, 20 miles away.

The play of light and shadows through my binoculars took some time to sort out, but eventually I noticed a dark spot over a mile out that looked out of place. Settling my optics, I confirmed it was a coyote, prowling the windblown ice during his mid-winter mating quest.

With the pack ice, I knew I could pick my way toward this coyote—or brush wolf, as we called them growing up. Spotting and stalking is one of my favorite tactics for hunting coyotes on frozen Lake Superior, especially if you throw a little calling in.

I knew chances were good the coyote would bed down in a sunny spot after a night of carousing. Calm winds worked in my favor too, as I picked my way west down the jumbled shoreline. Forty minutes later I angled out toward where I’d seen him last.  Some places where open water had frozen into a long, flat surface made for easy going.  In others, pinnacles of broken ice sheets made for slow, treacherous walking.

Another 40 minutes passed before I crawled up a 10-foot ice ridge and began glassing the desolate expanse in front of me … Nothing. But I was optimistic he was still out there. That’s how coyote hunting on the big lake goes. From afar, it looks like a lifeless arctic tundra, but with the right skills and tactics, coyote hunting here can be red hot.

We need long, cold and still nights for enough ice to form on Lake Superior—the world’s largest freshwater lake by surface area—in order for it to be huntable. Preferably, strong east winds pack ice into the west end. Typically about three nights in the -15 to -20 degree range with highs around 0 degrees will tighten up the west end.

But this no longer happens every year. Due to climate change (according to some) or natural weather cycles (according to others), Lake Superior isn’t seeing the ice cover it once did. The years when good ice ran several miles out from shore are the exception rather than the rule now. There’s still ice the coyotes use, especially if there’s heavy snow cover inland, but what looks like seemingly endless ice cover one day will turn into an expanse of blue water once the wind changes.

This winter’s been setting up nicely if you’re coyote hunter at this northern latitude. We’ve got snow better measured in feet than inches, but we need a string of sub-zero, windless nights to finish the deal. That’s when Lake Superior is the most appealing to coyotes in search of each other during the mating season. A February coyote has a lot in common with a November buck; he covers a lot of ground to find females for breeding.

The mating season is the only reason coyotes go out on the ice. There’s no game to hunt out there and no habitat to protect them from the elements. Coyotes will patrol the shoreline looking for prey and then venture up tributaries to scavenge or hunt, but the only reason they venture onto the lake is because it’s easier to travel and find each other out there.

In this region, coyotes are big, rangy animals compared to their western cousins. How big? Some have measured over 70-inches on a stretcher, making you wonder if crossbreeding with wolves is more than speculation.

Electronic calls with remote speakers have their place in coyote hunting, but not here. Old-fashioned mouth calls are lighter in weight and more effective on the lake. I don’t know if it’s lack of hunting pressure or if coyotes don’t anticipate danger far out on the ice, but if they can hear you, they’ll likely give you a chance. That means you don’t need the extra volume produced by an e-caller to bring coyotes in close.

For the same reason sound travels easily over water, it also travels well over ice. I’ve been able to spot coyotes nearly 2-miles out with good optics and had them respond from half that distance on a calm day.  It might take them an hour to get within shooting range, but the adrenaline rush of watching one close is the real reward. Never try calling one upwind of you. With their nose, you don’t stand a chance. Even when they come from downwind, they’ll try to circle and get the wind in their favor.

I’ve shot more than a few coyotes while blind calling along the lakeshore, too. It’s a good tactic when I see tracks on the lake but can’t locate a coyote from my access points. I’ll hike to the lake’s edge and pick my way out to the first pressure ridge before starting to call. There’s no need to spend a lot of time at these stands. Action comes fast or not at all.

Another proven tactic is to intercept a traveling coyote. This works best when have some time on your hands and wind direction isn’t an issue. There have been times when I’ve seen a coyote heading down the shoreline away from me, unwilling to respond to a call. I’ll hustle to a lake access point a few miles ahead of him and then set up an ambush (the key, of course, is to get there before they do). Here’s an example of a time when it worked well — almost too well.

Windless days on the lake are unusual, but one quiet afternoon I saw a big dog heading west along the ice-covered shoreline. I knew there was a dead-end road access maybe three miles away. It looked like he was about halfway there when I saw him, so I drove down the highway past him, then cut down to the lake. I’d barely loaded my rifle while taking cover behind an ice berm when I saw him coming from a half-mile away. At certain points I could see him trotting across vast sheets of smooth ice. Other times he’d disappear in the undulating pressure ridges paralleling shore. I was ready to light the fire once when he was 150-yards out, but then he disappeared in mounds of ice. I was frustrated, knowing he was in shooting range, but I was unable to see him. Suddenly, there he was, 15 yards away standing on top of the ice ridge I was laying on, looking at the top of my fur hat just above my scope. That one still holds the record — by good margin — for my closest shot.

Here’s another hint if you’re hunting the lake, or other any open area: Watch for a flock of ravens’ low, aerial gymnastics. Ravens concentrated in an area usually means they’ve located a coyote. Once I watched a trio of ravens taunt a coyote to the point that the coyote jumped into the air trying to grab one. I can only assume competition for the limited protein a northern winter provides creates animosity between species. Whatever the reason, a flock of ravens on the ice is a good sign for a predator hunter.

READ NEXT: How to Hunt Coyotes

But coyotes aren’t the only wild canine running the lake ice in winter. Wolf populations have thrived in this area of northern Minnesota and Wisconsin. And for as cautious as pressured coyotes can be, the presence of wolves only increases their paranoia. Coyotes, the survivors they are, have learned to make a living around wolves, but they’re more careful these days when coming to a call. Wolves will catch and kill coyotes when they can.

I’ve had several wolf encounters, and it’s critical to be able to identify the species in the field. I look for long legs and a big head on a wolf. Coyotes have more pointed ears and their tail is held low. If you’re an outdoors person, when you see a wolf, you’ll likely recognize it as such right away. So my theory is that if you’re not sure, it’s likely to be a coyote. If I see a wolf, I have never thought “coyote.” Wolves are quite distinctive.

If wolves in the Great Lakes region are ever taken off the endangered species list and a hunt is reopened, I plan to be out there on the lake with my electronic call playing a loud coyote howl. It’s wickedly effective on wolves, because there’s nothing a big dog hates more than a little dog barking in his backyard.

Gear for the Big Lake

You won’t need much equipment for this hunt, but here are a few basics. A good set of ice cleats is a must, so are white coveralls and good optics. Some kind of hiking staff is invaluable, preferably with a metal tip for purchase on the ice. I modified my shooting sticks by fastening screws into their bottoms. Now they serve both purposes for my offshore hunts. A small cushion or pad, preferably white, comes in handy too when you’re watching a hesitant coyote close the distance for an hour. A simple drag rope is useful for getting coyotes back to shore.

If a high body count is your goal, this hunt probably isn’t for you. However, if you’re looking for a unique winter experience in a wild, remote environment, this hunt checks the boxes. Just know that Lake Superior is very unforgiving of mistakes; be careful out there.

READ NEXT: Coyote Hunting Gear: Everything You Need to Get Started

A Double on Ice

Back on that calm, winter day years ago, I felt confident as I dug out my mouth call and put it to work. Almost instantaneously a dark spot appeared on another ice ridge about 600 yards out. Seconds later, a smaller one emerged behind the big dog, confirming it was a pair of coyotes. Both stared in my direction, looking surprised at the chance for free food out here. I adjusted my rifle bipod and worked the call again.

That did the trick. They started closing the distance, weaving in and out of the mounded ice between us. The smaller female, eager and clueless, passed the bigger male and was soon within 50 yards. She filled the scope. The male I wanted lingered behind, and then slowed, stopping 60 yards behind her. Normally I’d take the female first since the males sometimes hesitate to leave their girlfriend even after the shot, but the big dog with a suspicious look offered me a broadside opportunity that I couldn’t resist. When my .223’s crosshairs settled on the sweet spot behind his shoulder, I touched the trigger and watched him drop.

The puzzled female began the bouncing coyote trot we’ve all seen, but she appeared confused about the origin of the shot. I worked the rifle’s bolt and followed her through the scope until she made the mistake of stopping to sort it all out, about 250 yards away. No wind meant no wind drift calculation was needed for a high shoulder hold. Moments later, I broke out the short length of rope I always carry and dragged the pair to shore. It had been another good day on the big lake.