Coyote Hunting Gear: Everything You Need to Get Started

Here's what you need to start hunting coyotes 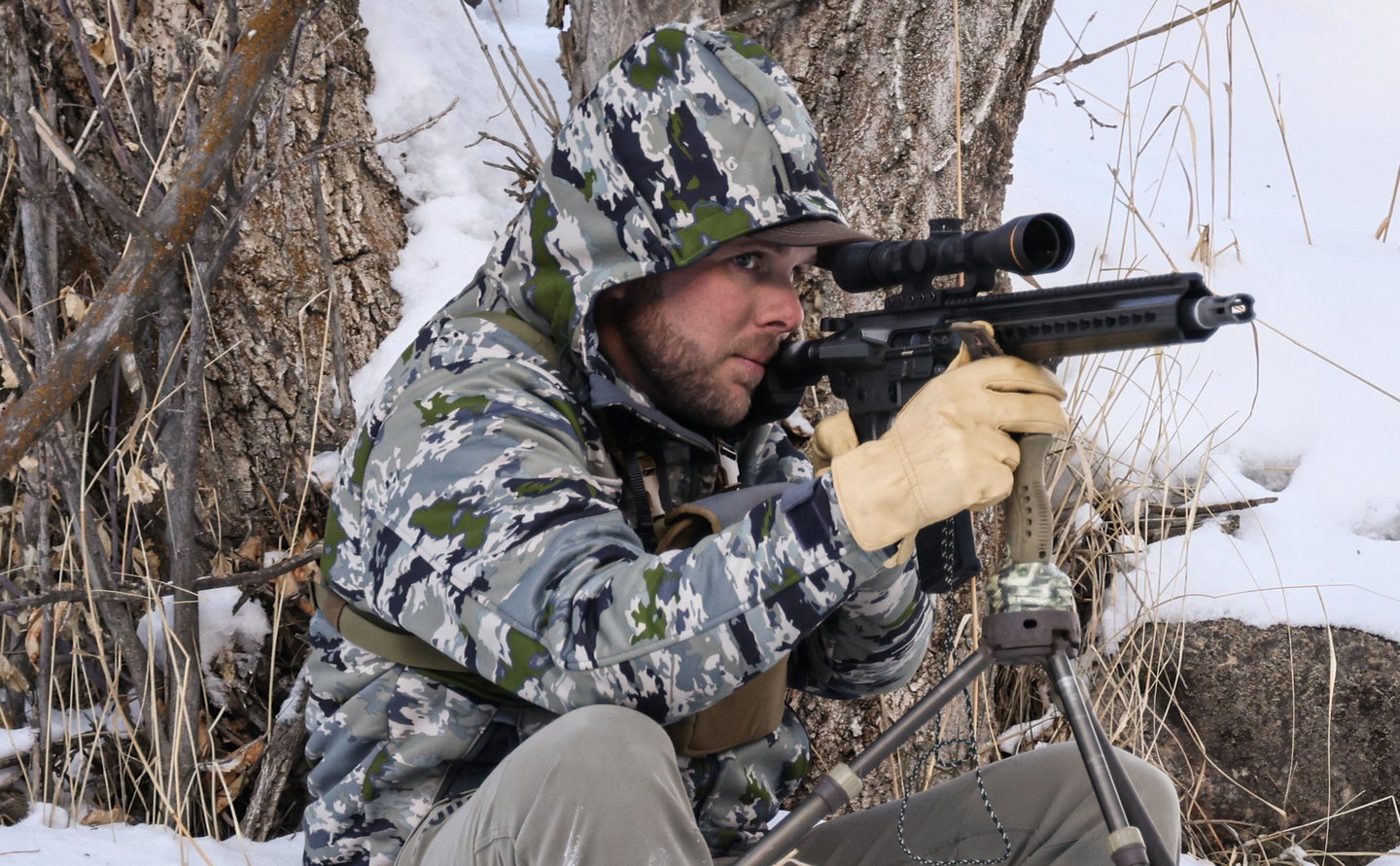 Here's all the gear you need to get started coyote hunting. Colton Heward
SHARE

Hunters are gear junkies by nature, constantly on the prowl for game-changing innovations that will swing the odds of success in their favor. Some hunting pursuits require an entire truck bed full of gear, however, one of the simple pleasures of coyote hunting is the minimal amount of gear you need to pursue one of the most widely spread predators in North America. However, not all gear coyote hunting gear is created equal, and quality gear can mean the difference between a pile of new pelts and a frustrating season.

With that in mind, I’ve compiled a gear list of everything you need to get started coyote hunting. As you get more serious about chasing coyotes, you’ll want to adapt and add to my recommendations. But for new coyote hunters, this is all the must have coyote hunting gear out there.

There are several key variables to consider when picking the ultimate coyote hunting rifle. This will sound simple, but first and foremost, your coyote rifle needs to be extremely accurate, and you must be comfortable shooting it. Coyotes are small targets, and shots are often taken while the animals are on the move, which requires dynamic shooting.

The next variable to consider is cartridge selection. Coyotes are thin-skinned and dainty in stature, opening up the floodgates for a wide variety of cartridges to be considered as effective coyote killers. Some of the most popular cartridges used by diehard coyote hunters include the .223 Rem., .204 Ruger, .22-250, 6mm ARC, and .22 Nosler. These relatively small cartridges produce minimal recoil, giving coyote hunters the ability to stay on target as well as deliver minimal damage to the fur depending on the bullet being used. More on that later.

Where these cartridges can fall short is when longer shots are required. Cartridges such as the 6.5 Creedmoor, .243 Win. and .308 Win. are popular amongst coyote hunters, especially in the wide-open spaces of the West, where longer shots and high winds are the norms. Coyotes are small enough that most centerfire rifles will quickly and efficiently kill them. Pick the one you have the most confidence in and hit the hills.

For years my favorite coyote hunting rifle was a Remington Model 700 chambered in .25-06. It was deadly accurate, and most importantly, I was very comfortable with it. The only downside to that rifle was its bolt action. There is a lot to be said about making your first shot count, but when you don’t, or have multiple coyotes come charging into a stand, running the bolt to chamber another round can cost crucial time. In recent years my go-to predator rifle has been a Christensen Arms CA-15 G2. This sexy little rifle shoots Hornady’s 55-grain Varmint Express loads near .5 MOA and has been the demise of many song dogs over the past two years. Built on an AR-15 platform, the CA-15 eliminates the need to run the bolt, allowing more time and opportunities for follow-up shots.

Read Next: How to Hunt Coyotes

The bullet you choose to hunt coyotes with will vary depending on what you intend to do with the coyote if successful. During the colder months, coyote pelts are in prime condition and make a great addition to the man cave. When hunting for fur, use a bullet that does not expand and put big holes into the hide, such as an FMJ or mono-metal bullet. If you do not intend on saving the fur, shoot whatever bullet is the most accurate out of your rifle. My coyote rifle has a sweet tooth for Hornady’s V-Max bullet, which is a wicked, rapid expanding bullet but tends to open up a big hole in the hide. I’ve found a well-placed shot to the vitals with just about any bullet will be sufficient on coyote.

Besides your rifle, your calls are the most important piece of coyote hunting gear you’ll take into the field. There are a wide variety of options for coyote calls ranging from hand calls to mouth reeds, to the most popular e-callers. Each of these has its benefits and setbacks. (Read our full review of the best coyote calls).

The popularity of mouth calls seems to lessen with each passing year due to the ease and effectiveness of electronic calls (e-callers), but there is still a time and a place when mouth calls are useful. The biggest advantage to using a mouth call is that no two sounds are the same, and these unfamiliar sounds can entice a leery coyote who has heard the same e-caller on multiple occasions. Some of the most popular mouth calls include:

The Stealth Parvo allows hunters to imitate everything from young pup howls to the deeper barks and vocalizations of mature coyotes. It is bigger than many hand calls, but this allows hunters to use a wide range of volume to project their calls to coyotes at extreme distances. MSRP $26.95

Foxpro’s Predator Combo is a trio of mouth diaphragms designed to give hunters the ability to make a multitude of sounds including rabbit and pup distress vocals as well as a variety of coyote howls and barks. MSRP $27.95

In terms of ease, Flextone’s Dying Rabbit hand call is the easiest hand call to quicky become proficient with. It is limited in the sounds it can make, but rest assured it imitates a distressed rabbit very well and is a tried and proven distress call. MSRP $10.99

Since their introduction, e-callers have changed the game of predator hunting, emitting real-world sounds that predators can’t resist. However, coyotes are incredibly intelligent and will learn to steer the other way when they begin to hear the same sounds or sequences played over and over. There is a plethora of very good e-callers on the market. The sounds on them will vary from brand to brand, but e-callers are the most fool-proof way to wet your toes in the world of predator hunting. Like any electronics, there is a wide range of callers with varying price tags. Below are two of our favorites that are both affordable and will get the job done.

With a very affordable price and reliable reputation, the Primos Dogg Catcher 2 is one of the most popular e-callers on the market. And with good reason. The Dogg Catcher 2 is loaded with features including the ability to play two sounds at the same time. It also features a 100-yard capable remote. MSRP $109.99

Foxpro’s Inferno e-caller is a compact, easy to operate unit that gives predator hunters access to 75 different premium sounds to lure a variety of predators within shooting distance. The Inferno also gives hunters the ability to attach an external speaker to increase the volume when needed. MSRP: $ 199.95

While not necessary for all setups, the use of some sort of decoy can be the straw the breaks the coyote’s back. More than anything, decoys are a confidence booster for an incoming dog. Most predator decoys are not what people think of when they think of decoys. These decoys are typically a neutral-colored piece of fabric on a stick that rotates and dances erratically to imitate a rabbit or some other form of prey in distress. Some e-callers actually come with a decoy attachment to be used in conjunction with the e-caller.

Quality optics are a crucial piece of coyote hunting gear. The terrain and location you are hunting coyotes will dictate the optics needed, but a reliable rangefinder is a necessity. Before I ever start a calling sequence, I range a variety of landmarks and make mental notes of their distance. This allows me to make on-the-fly hold calls when a coyote is coming, and movement must be kept to a minimum. There are many great options for quality rangefinders. Two of my favorites include:

Leupold’s compact RX-1400I TBR rangefinder is packed with features ideal for coyote hunting and many other pursuits. MSRP $199.99

The Prime 1300 rangefinder from Bushnell is an easy-to-operate unit that gives hunters rapid distance readings out to 1300 yards on reflective targets. MSRP $179.99

When hunting coyotes in tight quarters a binocular is less of a need than when you are hunting the wide-open spaces of the West. Living in Idaho, I always have my Leupold BX-4 Pro Guide 10×42‘s strapped to my chest so I can constantly be scanning distant ridges for incoming coyotes. If you are hunting in wooded areas where the maximum visual distance is 200 yards or less, a pair of 8 power binos would be a great addition to your optics repertoire. Always be deliberate with your movements when glassing for coyotes, and be cognizant of potential glare from the sun. Coyotes have phenomenal eyesight and will pick off movement and unnatural glare from hundreds of yards away.

Your rifle scope of choice will also vary depending on where you are hunting coyotes. When hunting them inside 200 yards, it is tough to beat a standard 3 to 9 power scope. If there is a chance of a longer shot, a little extra magnification is awfully nice when pulling the trigger. My current go-to scope on my CA-15 is a Leupold VX-3HD 4.5-14X40. This compact scope gives me enough magnification and the comfort of a CDS turret to ethically take longer shots while still being able to zoom out and make closer shots when charging coyotes come in tight.

In places where hunting at night is legal, the best thermal scopes are an absolute game-changer for coyote hunting, since coyotes are much more active at night.

Coyotes have phenomenal eyesight and an uncanny ability to detect danger from extreme distances. The brand of camo you wear hunting coyotes is far less important than making sure you have some sort of camo on to break up the human outline. Try and match your pattern to your surroundings as best you can, but do not overthink it. The best way to fool a coyotes eyesight is being tucked in the shade against a tree or bush and keeping movement to a minimum. It is also a good idea to wear a face mask to cover the unnatural glare from your skin when you are hunting coyotes in tight quarters.

Outside of the gear above, there are a few pieces of equipment that I would not consider necessary but will definitely aid in your success. Making a good shot begins with a solid rest. Bipods with extended legs are better than nothing but can get clunky when coyotes are on the move. My preferred shooting rest is a Primos Trigger Stick Gen 3 Tripod that allows for a full range of motion with minimal movement.

Another overlooked piece of equipment is something to sit on. This may sound silly, but a little extra cushion will make your stands more comfortable and subsequently allow you to sit at them longer. Some sort of butt pad also provides a layer of protection from mud and snow when they become an issue. Lucky Duck’s Predator Seat provides a cushioned seat and a comfortable back rest.

When everything comes together, hunting coyotes is an adrenaline-filled endeavor that you’ll enjoy year after year. Implementing quality coyote hunting gear does not guarantee your success, but it will certainly help you capitalize on opportunities. Take the gear recommendations above and tweak them to your own hunting style to bag a few more coyotes this winter.